Review: Contagion (2011) stumbles by giving us Cliff Notes to much grander story. 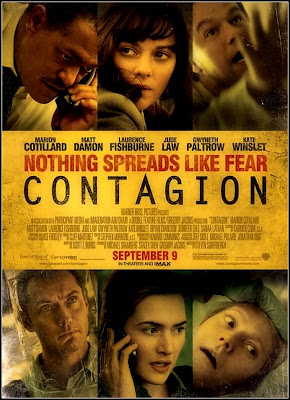 The 106-minute cut of Steven Soderbergh's Contagion is a generally engaging and always intelligent film.  It is clearly Soderbergh's attempt to play around in the Irwin Allen disaster genre in a style that befits the director's more buttoned-down and vérité style.  But like Traffic before it, this would-be epic feels like the abridged version of a much longer film.  Traffic was supposed to be an all-encompassing look at the futility of America's Drug War and the damage that it causes at home and abroad, but it played out like as a choppy, unfocused, 'highlights-only' variation of the British mini-series from which it was based.  Contagion, which is not based on any prior source but rather an original Scott Z. Burns screenplay, has the same problem, even more so because it is nearly an hour shorter than Traffic.  Contagion is more successful in imposing its viewpoint on the audience, and it's arguably a better film, but I still can't help but wonder how much more effective the 150-minute version of Contagion would have been.

A token amount of plot:  Okay, this one is going to be easy.  A flu-like illness seemingly originating from Hong Kong finds its way around the world and quickly starts racking up infections and a body count.  As the virus spreads and the civilized world panics, those entrusted with containing and treating such an illness race against the clock to prevent full-scale devastation.  That's pretty much it.  While the film is mostly focused on American scientists and American victims, it makes a point to show how this calamity is effecting the rest of the world as well.  We focus on CDC scientists (Laurence Fishburne, Kate Winslet, Jennifer Ehle), US government/military officers (Bryan Cranston, Enrico Colantoni), and various outsiders looking in (Jude Law, Matt Damon).

Some of these peoples' stories intersect while others are connected only by their common goal: survival in the face of a seemingly unstoppable pandemic.  There are no real out-and-out villains, although we may disagree with the actions of at least a few major characters (Jude Law's paranoid blogger skirts the line of villainy).  But overall, the film is a clinical and seemingly objective look at intelligent and diligent professionals doing their job in the highest of high-stress situations, along with snapshots at how regular citizens are responding to the crisis.  Matt Damon does fine and subdued work as the representative 'every-man', struggling to protect his daughter after his wife (Gwyneth Paltrow) and step-son die in the earliest days of the epidemic.  But this is not a character melodrama, and some audiences may be turned off but the documentary-style approach and the clinical way that the story is told.

The strong and scary first act works as a genuine horror film, as we see how the virus easily passes from one person to the next and we realize how often we leave ourselves open to the kind of casual contact that spreads something of this nature (handshakes, touching your face, standing next to someone on an elevator, touching a pole on a public bus, etc).  At its most disturbing, it works in much the same way as a Final Destination picture, in this case emphasizing the myriad of ways that you can expose yourself to disease in the course of any given day.  I carry around a small bottle of Purell in my pocket because it's convenient (especially when my daughter doesn't want to wash her hands in an exceptionally dirty public restroom), but I imagine the film would have started a run on the stuff if it had been a bigger hit.

But after that initial terrifying and engrossing first act, the film settles into an episodic pattern, whereby we only get the barest snapshots of each individual subplot.  The film, either due to length or from not wanting to repeat cliches from prior entries in this genre (think Outbreak), feels disconnected from itself at several key junctures.  A few of the major subplots are either not fleshed out (we are told that Law's blog caused or could cause civilian panic, but we see no evidence of such) or just plain icky.  Marion Cotillard's arc brings to mind the 'Eeek, pretty white girl being menaced by scary minorities' thread from Traffic while also implicitly taking her out of the realm of  science and basically making her a babysitter (I'll let you debate the gender implications).  Considering how short this picture is, it is almost inexcusable to have any subplots that don't work, especially when there is much ground that goes uncovered.

While it may be unfair to criticize a movie because we wanted it to be longer, it is indeed worth noting that the final picture does feel short, truncated, abbreviated, and painfully abridged.  It deserves credit for being less melodramatic and big-budget flashy than something like the admittedly entertaining and engaging Outbreak.  But a few crucial missteps, along with poorly paced second and third acts (second act is almost non-existent while the last act is overlong) only loom larger due to the fact that the movie is as short as it is.  This is a clear case where more would have been more, where a longer, more detailed and drawn-out approach would have served to both strengthen the overall narrative and lessen the impact of the film's genuine flaws.  At 106 minutes, Contagion is a good and intelligent film that has a few subplots that just don't work.  At 126-156 minutes, it stood a chance of being the crowning achievement of its specific sub-genre.  As it stands, Contagion is the Cliff Notes version of itself.

About the length of the film, Scott Z.Burns does say in an interview, "There’s thirty minutes of film that we didn’t use, forty minutes. I think Steven, as we got into the editing process, Steven quite correctly felt like, this movie needs to go at this speed."

Interviewer asks next: Is there going to be the possibility of seeing an extended cut? "I’ll do what I always do, which is beg him to do that or put a bunch of scenes on the DVD. I think on this one he will."

As for me, I'm going to see the film this weekend, most likely in IMAX.

On the one hand I'm interested to see the missing scenes. On the other hand I found the pacing and the intelligence with which the minimalistic story was told incredibly refreshing and effective. I didn't see this as a Cliff Notes version of a larger epic but rather a film that didn't spoon feed the audience with over-exposition and unnecessary scenes. I found it incredibly lean and effective storytelling. One of my favorite films of the year, no question.