UPDATED - Just for fun: How does The Hangover franchise compare with other R-rated sagas? 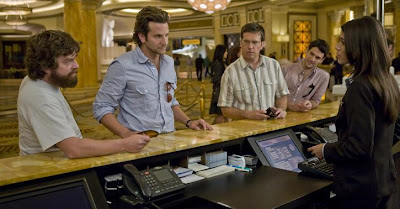 UPDATED with end-of summer numbers.  I mentioned last week that The Hangover series, with just two movies under its belt, is just under $100 million away from becoming the biggest R-rated franchise of all time in domestic grosses.  In case anyone wants a comparison, here is a list, best I could accumulate... An asterix (*) means that one of the titles in the series in question squeaked by with a PG-13.  Obviously, to be counted, the series has to be predominantly R-rated, so Police Academy does not count despite its initial installment indeed being rated R.  And you have to have at least one sequel, so The Passion of the Christ ($371 million all by itself) does not count either, but I will include remakes and reboots into the respective horror franchises where applicable.  And yes, for those who care, I have also included the list of said franchises with 'adjusted-for-inflation' grosses.  Enjoy...


As you can see, it's merely the 14th-biggest R-rated franchise when adjusted for inflation.  But as you can also see, most of the films ahead of it (and many below it) have anywhere from 4 to 12 films in their respective series.  Presuming that The Hangover 2 ends up with $250 million (an underestimate at this point), and the third film grosses just $225 million, then the whole Hangover trilogy will have amassed $750 million, it will far-and-away the biggest R-rated series in history and it will still be the eighth-biggest such franchise even adjusted for inflation.  And quite frankly, considering that there is exactly one R-rated franchise on the horizon (David Fincher's remake of the Millennium trilogy), The Hangover franchise's incredible standing among R-rated films is unlikely to change anytime soon.  Of course, looking over that list, you realize why studios are so unwilling to let their big-budget films go out with an R-rating in the first place.