Review: Snow White and the Huntsman (2012) is a dull, drab, and aggressively passive chore. 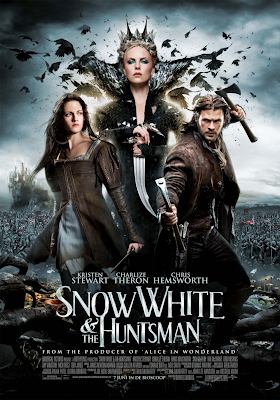 Strange is a movie that immediately establishes its dramatic stakes but spends the rest of the film waiting for the main characters to actually take seemingly obvious action.  But such is the case with Rupert Sander's big-budget Snow White reinvention.  While the idea of retelling Snow White on a more epic scale with bits and pieces from Lord of the Rings thrown in isn't the most inspired idea (Snow White: A Tale of Terror went the Gothic horror route over a decade ago), there remain elements for a primal hero's adventure with a dash of feminist subtext thrown in for good measure.  But the picture seems to go out of its way to dismiss or ignore what shows promise while aimlessly wandering around in a literal and metaphorical dark forest waiting for its inevitable action climax to occur.  It fails at least partially because it strands its lead characters with nowhere to go while stranding its lead heroine with nothing to do.

The film's strongest section is in its initial reel, which gravely recounts how the cunning and magical Ravenna (Charlize Theron) came to power through seduction and murder.  Theron is obviously having a grand time as the wicked queen, and her establishing cruelty quickly gets us on Snow White's (Kristen Stewart) side.  The film flirts with social relevance by giving her a tragic and sympathetic back-story that stems from the all-too familiar idea that a woman's youth and beauty is both her greatest weapon and her only real currency in a male-dominated world.  It's a potent theme that is sadly all-but forgotten and rendered irrelevant after the first act.  In fact, once Snow White narrowly escapes death and finds herself in the dark forest, she and the film both fall into a sleep of sorts.  Oh sure there is temporary humor and energy in Chris Hemsworth's somewhat robust turn as a reluctant hunter sent into the woods to snatch the princess under false pretenses.  But once Snow White escapes, the movie's narrative stops dead for a good 60-75 minutes with nothing of note to justify our interest.

There is one compelling detour, involving a village of widowed/orphaned women who have literally scarred themselves in order to protect themselves from the queen's beauty-obsessed wrath, but it's over in a flash and the film is poorer for its brevity.  Like John Carter from a few months back, this film quickly establishes the core conflict and sits on its butt for most of the running time until our passive hero finally decides to do something about it. And like that mega-budget fantasy film, what happens prior to the big pay off isn't very entertaining and the actual pay off is pretty underwhelming.  Despite the promise of big-scale epic action, Sanders shoots most of the film in that too-close, too-choppy style that renders much of it hard to follow (there is literally one action beat that suggests that Hemsworth is felled by a phantom punch).  The would-be grand finale is merely a few beats of mostly nameless/faceless soldiers bloodlessly hacking at each other before the main protagonists and antagonists face off.  The film runs over two hours and at least 30 minutes of that is spent on tangents that exist only because of fidelity to the would-be source material.  Despite being played by (among others) Bob Hoskins, Ray Winstone, and Toby Jones, the dwarfs serve no purpose in the overall story and are nothing but a distraction.  Ditto the protracted third-act (...minor spoiler...) sequence involving the whole poison apple and sleeping princess cliche.  Come what may, at least Mirror Mirror knew to ditch that unnecessary diversion.

Snow White herself is a shockingly hollow character who is given no real personality and no character arc of her own.  Say what you will about Lily Collins's flat star turn back in March, but her Snow White actually discovered the queen's cruelty and slowly learned about the injustices that needed to be righted.  No such luck here. Snow White has no character arc, no discernible personality traits, and not a trace of anything that would merit our sympathy other than a tragic childhood and that fact that she's physically attractive, which is ironic considering the initial moralizing. Kristen Stewart has shockingly little to do for the first 100 minutes of the film, and about as much dialogue as routinely given to a Charles Bronson character.  I'm generally a fan of Stewart's, previously saluting her turns in Into the Wild and Adventureland among others while even enjoying her underrated initial turn as Bella Swan in the first Twilight.  But this is a lifeless and artless performance, and it frankly it would bad enough to hurt her career as a big-studio lead if she seemingly had any interest in such a thing (she's allegedly quite good in On the Road).

Charlize Theron is terrific when she's onscreen, but she pretty much exits the film after the first 40 minutes and her screen-time after that amounts to a cameo.  Sam Claflin is just as dull here as he was in Pirates of the Caribbean: On Stranger Tides and is quickly becoming the go-to actor for boring boy-ish love interests.  On a slight digression, the film never explains why he can morally justify teaming up with the bad guys in order to also track down Snow White, turning a blind eye as innocents are murdered in front of him.  Sam Spruell is somewhat engaging as the queen's loyal brother (he's the villain that actually engages in onscreen action as opposed to sitting in the castle), with his best moment being a blink-and-you-miss it moment that implies that his relationship with the queen may be incestuous.

We have a flat and lifeless narrative punctuated by unimpressive and choppy action, a fascinating feminist subtext that is dropped in favor of generic heroics. All of this is rounded out by interesting characters who aren't onscreen enough and uninteresting characters that dominate the latter 2/3 of the film. Snow White and the Huntsman is a failure both as a reinvention and a movie. It earns points for production value, Theron and Hemsworths' respective star turns, and for a promising initial reel that makes promises the film can't keep.  But like John Carter, Snow White and the Huntsman goes nowhere and takes forever to get there.  Just because it makes an effort to be a real movie doesn't justify its failure as a quality film.

I saw it at a screening on Tuesday. Kristen Stewart can't act. She wasn't good in Into the Wild or Adventureland. It's always the same one note, mouth open and stuck in a bad love triangle. Snow White and the Huntsman is dull with a few good visuals.

I saw Sam Claflin only in British tv shows (Any Human Heart, United, White Heat) and thought he's quite good - well trained, charming and charismatic enough to be a leading man. It's a shame that he couldn't find right feature film role yet which he can prove his talent.

Good review Scott. The style is a lot darker and grittier than we usually get from these fairy tale stories, but that's not so bad and makes the story more imaginative, even if it runs out of steam by the last act. Theron was a perfect choice as Queen Ravenna and does everything perfect. Or at least that's what I was thinking.