Review: Moneyball (2011) is a light, intelligent baseball drama that doesn't over-inflate its importance or historical significance. 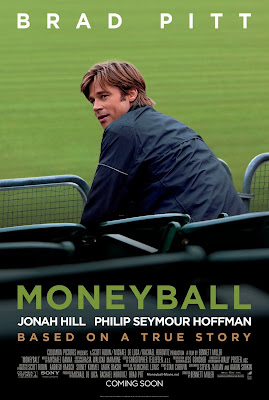 The greatest strength of Moneyball is arguably also its greatest weakness, at least in terms of mainstream appeal and would-be Oscar love.  It is a film adaptation of the Michael Lewis book which chronicles how Oakland A's manager Billy Beane (played in a near-flawless movie star turn by Brad Pitt) used Peter Brand's (Jonah Hill) groundbreaking statistical analysis to build a winning team out of low-cost players that were considered borderline useless by the bigger and richer teams.  That's the movie in a nutshell.  What is most refreshing about the picture is that it simply accepts that it is a small drama about one baseball team and how they achieved one successful season back in 2002. Moneyball is, give or take a few needless detours into Beane's family life, primarily about the game of baseball.  It's about how two people changed how the game was played by trying a different strategy that would allow poorer teams to compete against the likes of the New York Yankees.  If you are a fan of the game, a fan of statistical analysis, and/or a Brad Pitt fan, you'll more than get your money's worth. But the film makes little effort to appease casual viewers or those who don't already have an interest in its subject matter.  Like Gettysburg or Miracle, it is a procedural drama about its specific subject matter.  If you don't like baseball, then what you are even doing reading this review?

No one cures cancer.  No one saves the world from tyranny or fights for the oppressed.  No one overcomes impossible odds to win the day.  In fact, the whole movie is about arguably, to use my wife's nickname for cheating, 'shifting the odds' in their favor.  The film does not pretend to be anything more important than what it is.  In fact, the only real flaw of the film is the insertion of a handful of scenes which highlight Beane's relationship with his twelve-year old daughter.  The first such moment, involving the purchasing of a guitar, is overly long but does have a call back in the third act of the film.  But the rest of the scenes are merely needless moments of young Casey Beane (played by a perfectly fine Kerris Dorsey) worrying out-loud about whether her father's unconventional strategy will cost him his job.  This fear is dealt with more succinctly in the main story, and the entire subplot drags down an already lengthy movie while feeling deeply cynical.  Let's just say if you're a 'stereotypical woman' who doesn't like sports, ten minutes of Pitt bonding with his daughter isn't going to convince you to see the movie.  I would argue that there a few too many scenes flashing back to Beane's history as a failed ballplayer, but at least that material relates to the core narrative.  The film is about how statistical analysis changed the game of baseball, and it works best when it sticks to that thread.

Fear not, sports fans, despite the paragraph above, the vast majority of the movie is about baseball, with quite a bit of 'inside baseball' to satisfy the experts.  This film is easily the smartest film primarily about the game since the genuinely insightful Little Big League back in 1994 (The Rookie and Sugar are better overall films, but they are human dramas that involve people who play baseball).  I am no expert, but I grew up around the game, as my brother and father are sports fans, I collected the cards in the late-80s/early 90s, and I played an awful lot of Nintendo and Super Nintendo baseball games (which is a great way to learn the rules and what the stats mean, by the way).  As such, I appreciate that the film didn't spoon-feed the basics, which allows it to concentrate on its sometimes wonky subject matter.

As a film, it works as a compelling, if slight, drama.  Pitt delivers another solid star turn, as he succeeds in disappearing into the intelligent, if not overly wise, aging manager.  Jonah Hill is mainly around as an entry-character, but he gives a solid low-key turn.  The only other major character of note is Phillip Seymour Hoffman's supporting turn as on-field manager Art Howe.  He has arguably the hardest role in the film, as he has to be an antagonist (he initially refuses to place the newer recruits on the field) who nonetheless is not a villain.  He's in a no-win situation, forced to attempt to win games with a seemingly doomed strategy, but also willing to defy his general manager so he has a shot in hell of landing another managing job after the season ends.  The rest of the cast is basically a series of cameos, including Robin Wright as Beane's ex-wife and Reed Diamond as the General Manager of the Cleveland Indians (how weird it was for this Akron-native to see the Indians being portrayed as an idealized powerhouse ball club).  The movie more or less belongs to Pitt and Hill, and they make a fine team.

The screenplay by Steven Zaillian and Aaron Sorkin is smart and grownup without being insufferably 'clever'.  There are moments of wit and sparkly character interactions (I'm personally fond of Pitt and Hill's first meeting), but the film's dialogue feels organic and not overly showy.  In other words, this the Aaron Sorkin of A Few Good Men rather than the Aaron Sorkin of The Social Network (both are with merit).  By the way, despite what prior critics have said, this film has about as much in common with The Social Network as The Adjustment Bureau has in common with Inception.  The film's greatest strength is that it doesn't try to inflate its own importance, nor does it attempt to imply that its story was one with world-changing implications.  It's just a good drama about a slice of baseball history.

Moneyball succeeds in its small goals, erring only when it takes its eye off the ball in order to make its lead character 'more relatable'.  It contains a strong central performance by one of Hollywood's biggest movie stars, and said performance anchors a quietly compelling and grownup drama that works.  Billy Beane didn't change the world, and it can be argued just how much he changed the game (something the pre-credits text hints at), but it was a noteworthy moment for what once was America's Greatest Pastime.  As a (I presume) somewhat-fictionalized version of a notable true-life event in baseball, Moneyball is undoubtedly a success.  It's a darn good movie about an interesting subject that honors its subject matter without inflating its importance.  Like the players that are recruited for Beane's experiment, Moneyball is not a grand-slam home-run hitter, but it does reliably get on base.

Great review. Can't wait to check this out. What are your thoughts on its Oscar potential, Scott? Sasha Stone is gushing over it and sees a lot of Academy potential.

Excellent Film!! When it was over the audience was applauding.. Brad is Oscar deserving...