Review: Super 8: An IMAX Experience trips over its nostalgia-fueled ambition. 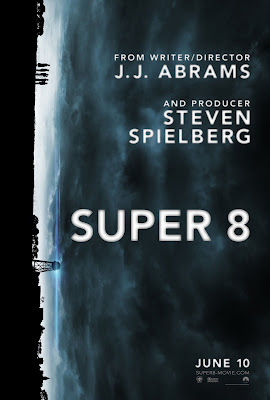 I have written several times over the last few years about various filmmakers basically spending time, money, and imagination basically recreating film genres of the past.  While they may succeed as technical assignments and/or loving forgeries, they need to have some other reason to exist other than to just remind moviegoers of the films of a long-ago era (at least Machete was an angry pro-immigration polemic).   J.J. Abrams's Super 8 is a technically proficient and superbly-acted homage to the theoretical first-wave (1974-1982) films of Steven Spielberg.  It operates on several different levels of viewer nostalgia but struggles to truly work as an emotionally potent work on its own accord.  It still barely passes for quality entertainment for most of its running time until it absolutely collapses in its third act.  Whatever my issues with the film as an impressionistic copy, Super 8 would have gotten away with it if it wasn't for that meddling climax!

A token amount of plot: It's 1979, in a small Ohio town, and Joe Lamb (Joel Courtney) and Deputy Jackson Lamb (Kyle Chandler) are still mourning the death of the family matriarch, who perished four months ago in an industrial accident. While Jackson struggles to relate to a son that he never really bothered to connect to, Joe plunges into the world of amateur filmmaking.  His friend Charles (Riley Griffiths) is making a zombie movie to enter into a local competition, and Joe's interest is doubled when Charles enlists the acting help of Alice Dainard (Elle Fanning), a young girl Joe has a crush on, but whose father has serious issues with the Lamb clan.  While shooting a scene late at night, the young would-be filmmakers stumble upon a fiery train crash and decide to use the carnage and US government response as 'production value' for their film.  But unbeknownst to anyone in town, something was inside that ill-fated train, something very much alive that may threaten the lives of every citizen living there.

More than that I will not reveal without prior warning, as Paramount has refreshingly made an attempt to not disclose the entire narrative in the trailers and TV spots.  But, it should be noted, those expecting some kind of kind of Sixth Sense/Usual Suspects type twist or any kind of surprise will be sorely disappointed.  In fact, despite obvious attempts to mimic Steven Spielberg (who is a producer on this film), the narrative and character arcs most resemble M. Night Shyamalan's Signs, another science-fiction film where outside threats helped a patriarch come to terms with his wife's violent death (and a Shyamalan film that did not have a twist ending at all).  One of the core problems is that this film is not told from the point of view of Deputy Lamb, but rather his young son.  While Abrams is obviously chasing some kind of hybrid of The Goonies and Cloverfield, this point-of-view issue renders the core emotional narrative somewhat false and exposes a certain cynicism on display.

Frankly the dead mother is used mainly as an emotional hostage, a way to get moviegoers to tear up on principle without realizing that the loss of this woman has not shattered young Joe in any way that would be out of the ordinary for any young man facing such a loss.  There are key moments where Joe theoretically makes some kind of emotional breakthrough, but it is his father who truly needs to begin healing.  It's a cheap shot and it feels less like Abrams making a personal statement about such loss than like Abrams calculatedly thinking "oh, most Spielberg films involved kids from broken homes" and/or "the dead mom will make people cry on cue".  Say what you will about Spielberg's most flawed entertainments, but at least Hook ("How do I balance doing my family-unfriendly job and being there for my kids?") and Indiana Jones and the Kingdom of the Crystal Skull ("What do I do once my best professional years are behind me?") felt personal.

Even more problematic than the falseness of the emotional button-pushing is the entire third act, which takes what was a character-driven drama and turns it into a discombobulated and rambling chase thriller.  Without going into details, the film becomes an endless chase without a clear destination or plan, and the two most interesting characters of the film (Kyle Chandler and Elle Fanning) are sidelined until the end of the picture.  It is a clear case of trying to have too much, as Abrams tries to balance the story of a family in pain, young kids trying to make a zombie picture, two kids experiencing first love, and a science-fiction plot involving an unseen violent force and the resultant government crackdown.  I do not know whether the full-blown horror and government conspiracy shtick in the third act was some kind of studio concession, but you can tell that no one's heart is in it.  But as a result of wasting precious time on this genre material, none of the kids outside Fanning and Courtney are remotely developed, and the group's friendship is thinly sketched and frankly irrelevant at the end.

Having spent the last few paragraphs whining, it is worth noting that the picture is not a total loss.  As mentioned above, it has the look and feel of, well, not quite a Steven Spielberg movie, but rather how we think we remember a Steven Spielberg movie looking and feeling.  The acting is solid across the board.  Elle Fanning shines brightest, which makes it that much more disheartening when her character is (...spoiler...) turned into a damsel-in-distress and is basically forced to sit out on the entire climax of the film (...spoiler end...).  The kids all look and act like real kids, even if they lay on the profanity and obnoxiousness a bit too thick on occasion (like the first Scream, the film feels a little like an adult trying to emulate 'how real kids talk').  The threat is kept off screen for the majority of the film, but Abrams cleverly uses background and shadows to suggest its presence before it is revealed.  Abrams uses silence and selective sound to build genuine suspense when it's called for, and the IMAX upcharge is worth it more for the sound than the visuals (the film, especially in its violent moments, is shot surprisingly tight, which does not benefit the large-screen format).  For the first two acts, Abrams succeeds in a somewhat glossified rip-off/homage that nonetheless entertains with its emphasis on character and old-fashioned storytelling.

But the film is finally not a success because it depends so much on milking our warm feelings of the films that inspired it.  Whether it's our memories of E.T.: The Extra Terrestrial, our feelings regarding who we were when we first saw that and other such inspirations, or our somewhat false nostalgia for human-scale heroics and adventures taking place on our Earth and without costumes, Super 8 capitalizes on things other than itself for its ultimate emotional impact.  That would be forgivable in the end if it were frankly a tighter and more disciplined picture, and if Abrams (and Spielberg) had managed to craft a finale that was anywhere near as compelling and thoughtful as the set-up.  The film may very well work on others, but I can admit that Masters of the Universe and Rocky IV were not all that great.  As for J.J. Abrams, I have no interest in seeing him try to be the next Spielberg.  I'm dying to see a J.J. Abrams film.

Scott - Should I see Super 8 if I am completely unfamiliar with Spielberg's earlier films? Or should I see those movies first and then Super 8 at a later date?

Not sure how you made it through life without seeing the early Spielberg stuff, but if you plan on seeing Super 8, you'll probably enjoy it more if you're not constantly thinking of all the films that it is an inferior version of.

My parents deprived me of any film made before the '90s that wasn't Star Wars or Indiana Jones. Love the blog, keep up the good work!