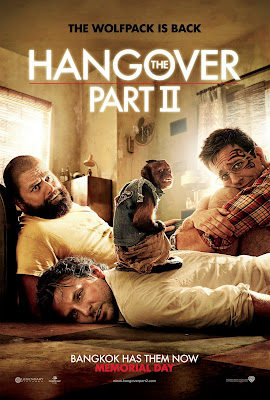 The biggest problem with The Hangover part II is not that it is a general retread of the first film.  After all, while we might have been spoiled by a decade full of part 2s that were not so much a sequel as a second chapter to a large continuing story, prior to 2001 (IE - Harry Potter and Lord of the Rings), it was not uncommon for a sequel to merely be a glorified remake of the first picture.  Sometimes it worked (Terminator 2: Judgment Day), sometimes it did not (Home Alone 2: Lost in New York).  The problem with The Hangover part II is that it's an EXPLICIT retread of the first film, hitting most of the same comic bits and character interactions but with neither the inventiveness of the first film nor the guts to go further with the premise.

A token amount of plot: This one is easy.  This time the Wolfpack is in Thailand for Stu's wedding.  Instead of the groom getting misplaced after a night of debauchery, this time it's the sixteen-year old brother of the bride who has gone missing.  And that's about it.  If I may digress for a moment... Pretty much every major character from the first film reappears at some point, except for Heather Graham's Jade.  The plucky single mother/prostitute is never mentioned by name and her absence from Stu's life is left completely unexplained.  I defended the first film from charges of misogyny two years ago, arguing that its female characters were overall no more or less complex or moral than the male characters (Stu's kindhearted dentist got paired up with Heather Graham's 'hooker with a heart of gold'), and Melissa Harris was condemned for not being 'a good person' (her gender was not her issue).  But the absolute lack of any character afforded to any of the females this time around, along with the completely unexplained absence of Graham, makes this one harder to defend.

If you've seen the first film, you will have a pretty good idea of where this film is going.  What is unfortunate is that it constantly sets up the possibility of going in new and different directions only to fall back to what happened in the first picture.  As a result, much of the fun of the first film, which involved piecing together a mystery and discovering just what happened to our pals the night before, is lost because we pretty much know what happened to them in a general sense.  The first film had a certain quirky innocence to it that is arguably part of why it appealed to mainstream crowds.  It was basically a raunchy sex comedy about misbehaving boys that didn't have all that much dirty humor and whose heroes didn't really do anything all that bad (and they were punished for each of their discretions along the way).

This time around, you can sense that Todd Phillips wants to go farther, wants to put our Wolfpack heroes in more horrible circumstances.  The opening act has a genuine sense of dread, and Phillips turns the Billy Joel song "Downeaster Alexa" (arguably my favorite of Joel's songs, natch) into a signal of impending doom.  But Phillips and company eventually wuss out in the end, as not only are the hijinks this time around not any more perverse or disturbing than the first time around, there are actually less 'incidents' than the first film, which leads to less actual moments of revelation and thus more padding.  Whether it was because the filmmakers didn't want to alienate mainstream audiences or because they couldn't go too far for risk of hurting the theoretical The Hangover part III, nothing much of consequence happens this time around.  And the one token permanent consequence is brushed off without a thought.

Point being, if you're going to basically remake the first film, why not either go to the extreme dark side from which there is no absolution, or perhaps even go to the extreme other direction (IE - they wake up and realize they spent the night doing mitzvahs)?  That Phillips chooses neither route shows a lack of courage on its part, which negates the potential for comedy and negates the movie's reason for existing as anything other than a vacation for the cast and a cash grab for the studio.  And that's a shame, because the film looks fantastic, which a rich orange-tint and dynamic Thai and Bangkok location work.  You can tell that Phillips is indeed trying to make a big 'epic' comedy, and the production values bear that out.  This is certainly a better directed and sharper looking film than the first.

If this were the first in the series, it would work pretty well as a comedy.  But it is not the first in the franchise, but the second, so the film loses laughs by going to so many of the same wells yet again, losing the key ingredient of the initial installment: surprise.  The film ultimately doesn't fail because it's merely a retread of the original.  The film doesn't work because it doesn't do anything new with its redone premise and is afraid to take the story (and its characters) in directions that would truly excite fans of the series.  The Hangover part II isn't just a remake of The Hangover.  It's a warmed-over, repetitious, and frankly dumbed-down version of The Hangover.

I agree almost completely. The only place where we differ is the part about this film not going beyond in "horrible circumstances". The biggest laugh in the theater last night was of the guilty/gross-out variety when the she-man revealed himself, then goes over the top with the simultaneous ejaculation explanation. For the most-part, this movie was not worth making. It was absolutely a cash-grab by the studios, and a payday for those actors involved.