Thoughts on Law & Order: Special Victims Unit as Meloni and Hargitay step down. 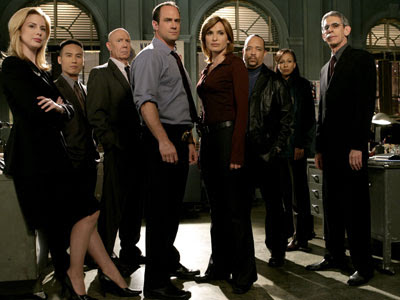 For about six years, from season 2 to season 8, Law & Order: Special Victims Unit was a pretty terrific procedural drama.  While people are understandably skittish about the subject matter, the show is generally less graphically violent than any of the CSI shows, let alone something like Criminal Minds.  But somewhere around season 9-ish, the show started getting silly... really silly.  The show went from a somewhat restrained 'just the facts, mam' procedural to a nonstop barrage of 'This isn't just any other case!!"  John Munch (Richard Belzer) was more-or-less written out of the show, Fin' Tutuola (Ice-T) became relatively scarce, and the series went from being a genuine ensemble cop show to the Benson and Stabler show, complete with 'will they or won't they?' teases and oodles of needlessly personal subplots.  Every season had at least one 'PLEASE give Mariska Hargitay an Emmy!' episode, which usually resulted in a season-low point (SEE Benson get raped in jail!)  that actually snagged her that Emmy nomination.
More importantly, a drive toward tawdry sensationalism led to a stunning amount of sheer incompetence on the parts of our beloved SVU unit.  Nearly every episode had a 'chance' meeting between a suspect and a victim in the squad room to allow for a dramatic confrontation.  And nearly every episode had Stabler and/or Benson making colossal blunders that often led to the deaths of innocent people or the character assassination of wrongly-accused individuals.  The best example of this is the sheer number of people who have died in the squad room right under the noses of our fair heroes.  Whether it's confessed killers jumping off the roof of the headquarters, bereaved victims playing vigilante  or distraught suspects having one last bit of revenge, the Special Victims Unit squad room is arguably less safe than the CTU building in those prime Jack Bauer days.  My wife and I still watch the show, but now it's mainly to laugh at the sensationalist melodrama, terrible police work, and mind-numbing incompetence on display week-in and week-out.

But even at its worst, Law & Order: Special Victims Unit has a knack for highlighting major issues before they reach the mainstream.  For example, they had an episode a few years ago about juvenile court judges who get paid off to sentence kids to privatized youth detention centers which aired well-before Michael Moore highlighted the issue in Capitalism: A Love Story. The press surrounding the departure of lead Christopher Meloni (which followed announcements of a gradual phasing out of Mariska Hargitay starting next season) mentioned a new show-runner, Warren Leight, who is apparently intending to revert the show to the more 'grounded' storytelling that make it one of the better network dramas in its heyday.  Of course, the original Law & Order tried the same thing back in 2008 (major cast changes, back-to-basics quality up-shoot) and got cancelled three seasons later.  This gets a big 'we'll see...'.

But in the meantime, my wife and I will continue to watch, partially out of habit, partially for our own amusement.  Maybe Richard Belzer will get more screen time this season, but that's probably a pipe dream at this point.  After all, 'in the criminal justice system, sexually based offenses are considered especially awesome (inside joke, don't judge us).'  Maybe the show itself can go back to its former 'awesomeness' as well, as opposed to its current 'heinousness'.
Scott Mendelson
Posted by Scott Mendelson at 11:26 AM