Review: Melancholia (2011) engages primarily in its opening and closing passages. 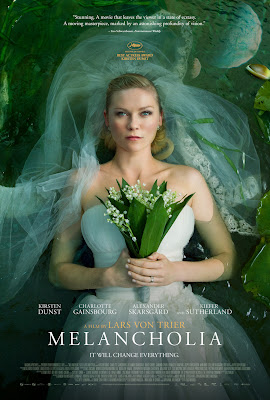 The opening and closing reels of Lars von Trier's latest opus are so engaging, imaginative and potent that it seems almost a shame to relate that the middle 100 minutes don't amount to all that much.  Like 2001: A Space Odyssey (a better film, although still not among my favorite Kubrick pictures) the film makes its point pretty pointedly during its jaw-dropping opening and closing moments, but strains viewer patience during the body of the film itself.  It is splendidly acted and has a certain emotional weight that will stay with you past the credits.  Whether it's worth your time to see what works about this passionate tone poem is arguable.  But one cannot deny that it is still, warts and all, a singular work of art.

The plot, such as it is, basically takes the idea of Earth's destruction as a metaphor for depression.  The primary relationship concerns two sisters, one of whom (Kirsten Dunst) is getting married on that very day.  As the wedding party unfolds and the parents (John Hurt and Charlotte Rampling) reengage their squabbles with little thought to how it affects their daughter, young Kristine finds herself spiraling into a real depression and begins to notice a specific star in the sky which is shining brighter than the others.  The party comes to a head and the film immediately jumps to a short time later, as the mysterious shining star has been revealed to be a new planet barreling toward Earth.  Justine's brother-in-law (Kiefer Sutherland, in an uncommonly non-showy performance) remains optimistic that disaster will be avoided, while Justine's sister Claire (Charlotte Gainsbourg) becomes overwhelmed with the idea that she will be unable to protect her son from the coming end-of-all-things.

How this all turns out I would never dream of revealing, but waiting until the finale becomes something of a chore.  Yes, the actors all turn in splendid work and yes the family dynamics are intriguing.  But this is an awfully long film considering how little actually happens.  Part of the problem is, again, the strength of the first and reels.  Aside from being visually and emotionally dynamic, they do an excellent job of establishing character and narrative, arguably to such an extent that much of the rest of the movie borders on filler.  The idea of the onset of clinical depression representing the world coming to an end is a potent, if somewhat obvious notion, and the film arguably works better as a giant metaphor than a narrative exercise. As a tone poem and mood study, Melancholia arguably sits squarely between the genuine success of The Tree of Life and the pointless and eye-rolling exercise in style and mood that is Drive.  It's an occasionally operatic tale that is ambitious enough to perhaps forgive its transgressions.

At its best, Melancholia is the very definition of an art-house film.  It is surely both not intended for general audiences and a deeply personal experience.  It's main flaw is arguably its length, which merely serves to highlight how little story there is to tell and how quickly it is told.  But there is about 1/3 of the movie that is borderline breathtaking and verges on brilliance.  That the rest of the film doesn't quite measure up is a shame, but its still is worthy of note, but as an acting showcase (especially from Dunst and Sutherland) and a genuinely unique experience.