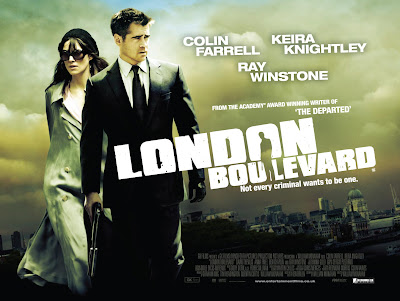 I could spend 800 words explaining why William Mohanan's London Boulevard is a warmed-over quasi-parody of the British gangster film. I could whine that Colin Farrell and Keira Knightley are misused and wasted, with only David Thewliss having anything fun to do.  I could elaborate on how the one interesting story component (an ex-con protecting a movie star from relentless paparazzi) is more-or-less ignored after the first act.  But instead I'll just save my time and yours and embed this wonderful Saturday Night Live parody from last February.  It pretty much sums up my problems with this underwhelming genre exercise.  But at least I didn't need subtitles to appreciate its mediocrity.

Posted by Scott Mendelson at 3:39 PM