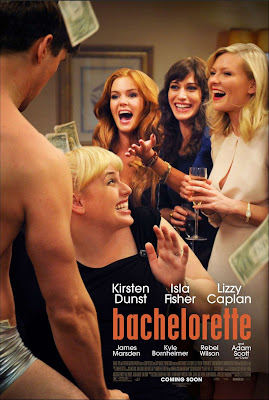 There is going to come a point, hopefully in the very near future, where we'll see enough female-centric comedies that each one doesn't feel like some kind of major moment in cinema.  We're not quite there yet, so one could arguably discuss Leslye Headland's Bachlerorette in terms of what it does or does not represent in the ever-quickening trail to gender parity in big-screen comedy. For the record, the film is based on Headland's own play, so anyone accusing the film of being a rip-off of Bridesmaids and/or The Hangover should be smacked on the head right here and now.  If the film serves as any kind of benchmark, it will be as a big-screen that will test the ever-present double-standard in terms of how we respond to female characters.  The film's star trio (Kirsten Dunst, Lizzy Caplan, and Isla Fisher) are notable in that they are presented as every bit as vulgar, cruel, and socially-clueless as any number of male comedy trios over the last many years.  Will audiences hold them to a higher standard of sympathy and moral purity, or will audiences realize that they are no better or worse than any given Wolfpack?


The plot for this one is pretty simple.  Three friends (Dunst, Caplan, and Fisher) find themselves invited to the wedding of an old high school acquaintance (Rebel Wilson).  She is under the impression that they were all good friends, but the three would-be bridesmaids considered her more-or-less a pity friend.  So imagine their shock when a woman they called 'Pig Face' in high school ends up being the first among them to get married?  All three of them take the moment to evaluate where they are in life, with the realization that all three pretty much peaked in high school.  After a first reel filled with somewhat conventional (if witty) rehearsal dinner antics, the narrative kicks into gear after the bride's wedding dress ends up mangled.  Into the city these three anti-heroes venture to try to repair the dress in time, where comedy and very low-key life lessons may be in store.

The stage-bound origins are both a blessing and a curse.  On one hand, the picture often feels stage-bound, with long stretches of the film amounting to somewhat static dialogue sequences.  On the other hand, the film's origins makes it predisposed to a certain ground-level realism regarding the 'hijinks'.  There are no outrageous action sequences or larger-than-life escapades.  Everything that occurs in this film *could* happen.  Since the film isn't loaded with large-scale set-pieces, the emphasis is, as it should be, on character.  All three lead females dabble in and explore certain stereotypes, but all three give depth and nuance to what could have been stock characters.  Dunst's Regan sees herself as someone who 'did everything right' and is still miserable with her career and her non-committal boyfriend.  Caplan has her own reasons for being deeply unsatisfied with her life, which I won't reveal here only to say they are more complicated than one might presume at first glance.  Fisher's Katie is a borderline airhead with a penchant for illegal substances, and she somewhat fades into the background as the two other leads take center stage during the second half of the picture.  Rebel Wilson is basically a glorified McGuffin while the men in the picture (James Mardsen, Andrew Rannells, and Adam Scott) mostly serve as a sounding board, although Scott has the most to do of the male trio.

What occurs in the film's brief 87 minutes will not astound anyone, but the picture works on its own specific terms.  Most of the comedy is born out of frustration and desperation, although Caplan gets an amusing introductory monologue about fellatio that has a wonderful pay-off.  On the surface, the film toys with the idea of three seemingly blessed young women who have failed to find happiness despite their advantages, with the realization that their success early in life meant little over the long term.  More broadly, the film is just one of a series of emerging entertainments dealing with a generation of young-adults wracked by the new reality that is what seems to be permanent economic recession, and how the success and security promised to them by their parents has disappeared (there is running gag of sorts dealing with Katie's lowered expectations, now merely wanting a suitor with gainful employment).  The film has an undercurrent of sadness and the film doesn't end with everything even remotely wrapped up.

Bachlorette is a solid and engaging character study wrapped up in vulgarity.  The raunch feels organic and the film never reaches for a 'water-cooler moment' at the expense of its characters and its story.  The picture is superbly acted by all, with Dunst again showing that she may once again be a force to be reckoned with minus the shackles of mainstream heartthrob status.  Headland has crafted a story specifically about women that neither apologizes for its flawed characters nor pretends to be making any kind of grand gesture toward gender equity.  It will be interesting to see how audiences and fellow critics respond to these genuine anti-heroes.  Here's hoping they see a well-acted low-key character comedy and leave it at that.

Grade: B
Posted by Scott Mendelson at 7:00 AM

i am looking forward to seeing this, especially considering the talented cast (love me some lizzy caplan). but can't we move past the "female friend jealousy" angle that seems to pop up with any movie heavily involving a wedding?

and have i mentioned i love lizzy caplan?

The film uses the token 'female jealousy' bit to explore the characters' deeper issues, and said plotline resolves itself in a refreshingly realistic fashion pretty early on. It's not the core thread.