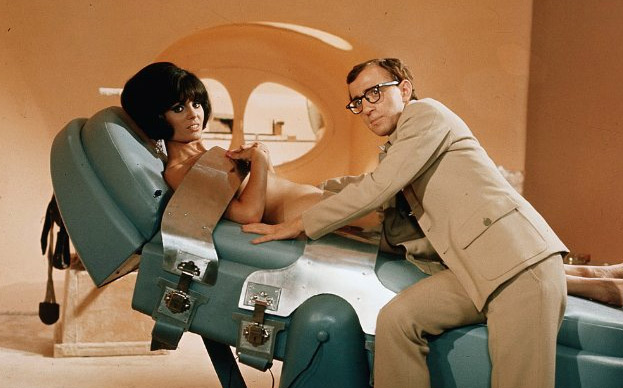 With Skyfall dropping in theaters in just a few months, along with the 50th anniversary of the James Bond series, a close friend and fellow film nerd, Brandon Peters, has generously offered to do a comprehensive review of the entire 007 film franchise. Today is a *BONUS* entry, with Mr. Peters delving into the 1967 all-star James Bond spoof Casino Royale. I hope you enjoy what is a pretty massive feature leading up the November 9th release of Skyfall. I'll do my best to leave my two-cents out of it, give or take a few items I have up my sleeve (including a guest review from my wife as she sings the praises of her favorite 007 film, you won't believe what it is). But just because I'm stepping aside doesn't mean you should, as I can only hope for robust discussions in the comments section. Without further ado...

BONUS – A Few Words About Casino Royale (1967)
By Brandon Peters

I was originally just going to cruise on by this film when doing this retrospective.  It’s not a part of the official 007 canon.  I had only seen it once (sophomore year of college) and I didn’t like it.  However, after the positive response this series has received, I decided to return to Casino Royale (1967) for a viewing and talk a small bit about it as an appreciation bonus.  I also thought, maybe I was too young the first time I saw it.  Maybe I was in bad company that rendered it unenjoyable.  Maybe I’ll appreciate it more being in the thick of the 007 films this was to parody.

My sophomoric self was right all along as it turns out.  This film is a stinker.  I don’t care to hear about production problems and excuses for this film, it’s still incredibly lame.  I did grab a few chuckles, but I could honestly count them on one hand.  Casino Royale is bloated, boring and unfunny.  The film contains a wide array of completely uninteresting characters, none of which captivate you and none of which we stay on long enough to follow.  Who’s our hero or at least main character?  Is it David Niven?  Peter Sellers?  Ursella Andress?  Orson Welles?  There’s really no main character in this film as characters are focused on and then disappear for gaping amounts of time.

Casino Royale is a staggering 2 hours and 11 minutes long!  That’s way way way too long for a comedy (this film claims it’s a satire.  That’s fine and dandy but there’s a lot here played for slapstick yucks).  The film truly doesn’t get its start until around the 35 minute mark.  All that came before is incredibly pointless and not even remotely engaging.  And to be honest, a lot of scenes/sections of the film are this way.  The look and feel of this movie feels like the Disney live action family films of this era.  Nothing at all looks or feels like they are parodying the Eon Bond films.  It’s more like the people who made it never saw a Bond film but had heard about some of them and then attempted to parody it (kinda like the current writing staff of SNL).

Casino Royale is an easy skip.  If you haven’t seen it, don’t bother.  The film barely resembles the book and only bears the name James Bond, it doesn’t do it any favors.  The only truly funny part is Woody Allen’s introduction scene (and then he’s not seen again until the end of the film where he appears completely uninterested).  If you’re still curious, I’m going to reiterate that this is a PARODY FILM THAT IS 2 HOURS & 11 MINUTES LONG.  Imagine Scary Movie, Meet the Spartans or any one of those being that long.  I recommend you watch Austin Powers: International Man of Mystery.  I’m never going to revisit this film again.  This viewing sealed it.
Posted by Scott Mendelson at 6:30 AM

Personally, I quite enjoy this film. Yes, it's a complete dog's breakfast, a surreal example of how not to make a movie, one which truly doesn't know what it is. However, Niven is charming, and the farce of the production history adds to the enjoyment. Certainly not for everyone though.