In an era of franchises & tentpoles, Tony Scott made "movies" 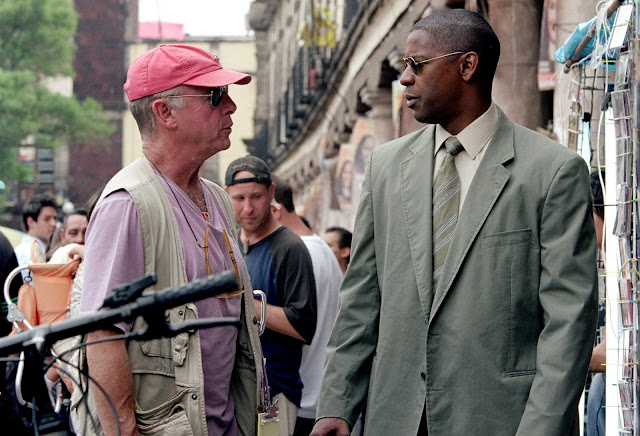 As is the case with unexpected 'obituaries', you find yourself writing or saying things that you wish you had said when the person in question was still around to hear it or read it.  I wish I had written this in November 2010.  Tony Scott's film legacy is two-fold.  For the first fifteen years of his career, Tony Scott was among those most responsible for the modern-day macho blockbuster.  His second film, Top Gun, basically paved the way for the modern big-budget big-scale action picture that happened to be set on planet Earth.  I'm no fan of the film, but it was, along with Rambo: First Blood Part II, easily the biggest-scale action picture of its day that didn't involve Star Wars, Indiana Jones, or James Bond. It turned Tom Cruise into an icon and was almost as much of a cinematic game-changer as Star Wars or Batman.  But it was the second half of his career, spanning from 2001 to 2010, that made me a fan.  While we can argue over whether the first fifteen years were superior or inferior to his final nine, his last decade of work cast Mr. Scott in a new, arguably more important light.  In an era dominated by mega-budget fantasy spectacles, Tony Scott was often the last refuge for the old-school 'movie'.
I've written quite a bit about the endangered species that is the star-driven high-octane genre vehicle.  In the mid 2000s right up to the beginning of this new decade, it seemed like draconian restrictions on the R-rating as well as the allure of the $500 - $800 million all-ages global blockbuster had doomed the adult thriller to extinction.  While Jerry Bruckheimer fell into family-centric fare (such as Pirates of the Caribbean, National Treasure, and The Sorcerer's Apprentice) and Michael Bay became consumed by the Transformers franchise, Tony Scott never gave up the good fight.  Tony Scott became one of my favorite directors for the same reason Denzel Washington became one of my favorite actors.  Both, often working together, used their capitol to make big-scale, adult-skewing mainstream genre fare that didn't require fantasy worlds or copious fantastical effects to entertain.  In an era when "R" became the scarlet letter, much of Scott's work (Beverly Hills Cop II, Crimson Tide, Enemy of the State, Spy Game, The Taking of Pelham 1 2 3) was R-rated not because they were grotesquely violent or gore-drenched, but merely because they didn't feel the need to edit around their genuinely adult content or apologize for their adult sensibilities.

And the truly hard-R pictures in his filmography (The Last Boy Scout, True Romance, The Fan, Man On Fire) often pushed the envelope in terms of violence that nonetheless never used violence as an excuse to cop out on character development, compelling narratives, or groundbreaking visual styling.  But he didn't need an R-rating to succeed in crafting adult entertainment, as his best film (Unstoppable) and one of his most entertaining pleasures (the Bruckheimer-produced Deja Vu) both fell under the 'suitable for all ages' banner while delivering mainstream thrillers that were at least as smart as the average audience member, if not more so.  And he was just as successful working in the network television arena, creating (along with his brother Ridley Scott) Numbers, which slowly became one of the better and more openly character-driven and humanistic procedural cop dramas on the air during its six-year run on CBS.  it emphasized family relations and character development over crime and punishment while providing roles of a lifetime for David Krumholtz and Judd Hirsch.  Ditto for everyone involved with The Good Wife.

Not all of Tony Scott's films are gems.  I loathe Beverly Hills Cop II while you probably hate for The Fan (I think you're wrong, but that's for another day). He doesn't quite have one defining masterpiece, although I would argue that Crimson Tide, Enemy of the State, and Unstoppable are perfect examples of the form.  The indisputable irony of Tony Scott's 27-year feature film career is that he began as a pioneer of the modern blockbuster and ended as a quasi-defender of the mainstream adult entertainment.  It is another tragic irony that he has left us just as the mainstream adult thriller seems to be making a comeback, spurred on by films like The Town, Limitless, and Safe House.  For whatever its worth, Tony Scott should rest in peace knowing that he kept a most important sub-genre alive almost by himself and lived to see its return as a priority in the studio release pipeline.  In a time when mainstream Hollywood seemed to make nothing other than franchises and fantasy tentpoles, Tony Scott continued churning out high-quality star-driven genre fare for adults.  He is gone now, but his unexpectedly important legacy is not forgotten.

Posted by Scott Mendelson at 2:06 PM

While True Romance will always be my favorite film from Scott, let alone one of my favorites in general, I think one could argue that Enemy of the State would be the go to film to describe everything that Scott would be working towards as a director in terms of being a high-octane, mainstream entertainment film that is also an adult drama. It also seems like the middle point between his style that would go between bringing in the masses and then leading into when his filmmaking style got so much more aggressive.

Out of the many things written today, this was truly the beat piece about the late Mr. Scott, and a firm reminder of why I frequent this site. Great job

Enemy of the State is my second-favorite film of his and it may end up switching with Unstoppable years from now. I agree 100% with what you said above. It's arguably his 12 Monkeys (my favorite Gilliam film), perfectly mixing his own personal aesthetics in a completely mainstream package.

Great write-up, and I agree with the thesis at least. Tony has been a favorite of mine for a long time, and I liked that later in his career he began experimenting with style so extremely. He made some of the most visceral, frankly awesome films of recent times. I like that he seemed to do exactly what he wanted to, and it can't be forgotten that he was also a wonderful producer that encouraged a lot of great young talent. He made movies in the way so few people make them anymore. Not films, not blockbuster, not tentpoles: movies.

I'll always be proud to own a copy of Domino that I had Richard Kelly autograph.

I watched 'The fan' on TV yesterday. I had not seen it and I loved it. It rekindled my appreciation for Robert DeNiro. His rendition of the character is masterly. Great actor in a great thriller.

He was always my least favorite working director. Now I feel bad I talked so much smack. I just couldn't connect to his voice.


It's a shame the way he left us. The death of a loved one is always difficult to understand and accept and I can only imagine how much worse his family and friends are feeling considering the circumstances.

No need for guilt. There is no law saying you have to like the guy's films just because he died. I was a big fan of the second half of Scott's career. It doesn't mean I would write a glowing essay on the films of (random example) Len Wiseman if he were to suddenly die next week. And I certainly didn't undergo a magical conversion towards the films of Chris Farley when he died back in December 1997.

for me after true romance, its gotta be man on fire. love that flick