How 2001 was a film game-changer V: Lord of the Rings and Harry Potter influence a decade of blockbusters.

This is the final entry in a handful of essays that will be dealing with the various trends that were kicked off during the 2001 calendar year, and how they still resonate today.

Yesterday (the 19th) marked the tenth anniversary of the US theatrical release of The Lord of the Rings: Fellowship of the Ring.  It was just over a month after the US theatrical release of Harry Potter and the Sorcerer's Stone, which had debuted with a record-breaking $92 million opening weekend.  Debuting with a December-record $72 million five-day haul, The Fellowship of the Ring parlayed superb reviews and splendid word of mouth to break a number of Christmas and New Year's season records and show off some of the best legs this side of Titanic and The Sixth Sense. These two films, which closed out the year, would directly or indirectly pave the way for the next full decade of would-be blockbuster filmmaking.  At last, we had reached a point where basically anything was possibly onscreen if you had enough money and (ideally) enough talent.  The culmination of every trend discussed in the prior essays (the gutting of the R-rating, the explosion in opening weekend box office potential, the emergence of overseas box office dominance, the mainstreaming of 'family entertainment' etc) was personified in the massive success of these two big-budget fantasy pictures.  Whether based on a novel, a comic book, or a theme park ride, big-budget fantasy spectaculars were about to become the dominant tentpole of choice.


I'm not going to spend paragraph after paragraph discussing why Lord of the Rings and Harry Potter resonated with audiences (IE - why they were both so damn good), both because I've done so on several occasions and because if you don't believe it now, this essay isn't going to change your mind.  But the two noted blockbuster films and their respective massive successes had a number of effects, for better or worse.  They normalized the $300 million domestic-earner, they basically sent every studio scrambling to find their next fantasy franchise, and they led to what I like to call 'the trilogy trend'.  Obviously this applies to the Lord of the Rings trilogy more than the eight-part Harry Potter series, but what followed in 'blockbuster-land' was an incessant need to turn every big-scale picture not just into a series of continuing sequels, but an interlocked trilogy.  These days, it is almost a surprise when a big-budget fantasy picture (such as The Sorcerer's Apprentice) actually ends with a definitive finale that doesn't leave a major loose end dangling.

Ironically, despite arguably kicking off what could have been a trend in fantasy-lit adaptations, hardly a single would-be copycat flourished in the ten years since.  With the exception of Twilight (which is less a pure fantasy and more of a gothic romantic drama) and the already established The Chronicles of Narnia, pretty much every would-be fantasy franchise died on the vine.  In such a fashion, Lord of the Rings and Harry Potter were similar to Tim Burton's Batman, which kicked off ten years of one financially-disappointing would-be comic book franchise after another (Dick Tracy, The Rocketeer, The Shadow, The Phantom, Spawn, etc).  What the two films did spawn was more important than copycats.  They spawn an idea, that a massively successful franchise could reap not just hundreds-of-millions of dollars at the global box office, but billions. 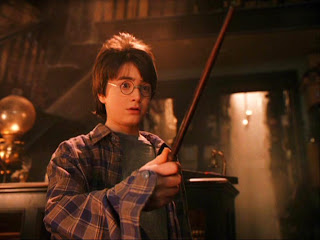 And, and this is equally important, they helped normalize the idea (along with Shrek, which also came out in 2001) that mainstream fantasy pictures were now the 'family film' of choice.  No longer were kids going to specific 'kids flicks', but rather they were tagging along with their parents or older siblings to PG-rated cartoons like Shrek and PG-13-rated (and often uber-violent) fantasies like The Two Towers, Transformers, or Pirates of the Caribbean: Curse of the Black Pearl.  The four-quadrant blockbuster, the 'one film to serve them all!' was normalized.  There was no need to make films for young kids, older kids, and adults.  You could simply make one film that would appeal to all ages, be they appropriate for the youngest, and they would all flock to them in increasingly record numbers.  The end result was sadly that studios abandoned not just films specifically for the youngest kids but films specifically for adults as well.  Through no real fault of their own, Harry Potter and the Sorcerer's Stone and Fellowship of the Ring were in just the position to capitalize on a year's worth of major developments and their respective sheer quality put them in the position to rack up massive profits and show the studios the path to financial success for the next ten years.

I've long theorized that there is a sea change, in the kind of blockbuster movies that Hollywood makes, every twelve years.  In 1977 we had Star Wars, in 1989 we had Batman, and in 2001 we had Harry Potter and Lord of the Rings (if I can cheat the timeline a little, I would argue that 1967 ushered in Bonnie and Clyde and the 1970s 'new wave').  It stands to reason that something is coming down the pike that will bring about a massive change in the kind of films that Hollywood makes for mass audiences.  What are my theories about what it might be?  Well, let me embody the spirit of the films of 2011 by ending this series with a gosh-darned 'xuánniàn'...

Would Avatar count as the sea change where everyone wants to shove 3D everywhere?

First of all, I think the random and wanton use of 3D is pretty much at an end by the next year or so. Second of all, while studios may be using 3D, they are not rushing to make movies 'like Avatar' (insanely expensive but wholly-original films that have social/political relevance). They chose to 'cash in' on Avatar by go full-3D just as they decided to capitalize on Inception by remaking Total Recall.