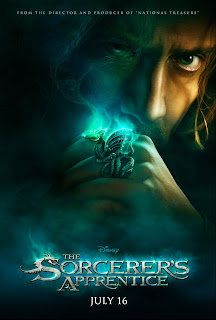 For what it's worth; The Sorcerer's Apprentice is a lot closer to Pirates of the Caribbean: Curse of the Black Pearl than The Haunted Mansion. Like the two above examples, the film takes a small portion of Disney culture and makes a movie out of it. But while The Haunted Mansion attempted to graft an Eddie Murphy family-comedy template into a standard haunted house comedy that contained various portions of the famous Disneyland ride, Pirates of the Caribbean took bits and pieces of their respective theme park attraction and then created an entirely original world and a completely original picture. Director Jon Turteltaub tries the same trick this time around, taking a brief cartoon from Fantasia and using it as a jumping off point to create original characters and an original narrative. While the film tells a plainly generic story, the picture works because of, shockingly enough, the witty writing and knowing performances.

A token amount of plot - A thousand years ago, the legendary Merlin was murdered by former apprentice Maxim Horvath (Alfred Molina), while Balthazar Blake (Nicolas Cage) Balthazar Blake (Nicolas Cage) watched in horror. Blake trapped Horvath and the evil Morgana (Alice Kringe) in inescapable jars, but at the cost of the soul of Blake's fellow sorcerer and true love, Veronia (Monica Bellucci). Since that time, Blake has traveled the world searching for the next true heir of Merlin, as only he can truly destroy Morgana once and for all. Little does college physics nerd Dave Stutler (Jay Baruchul) realize that he has a destiny to become a true sorcerer and protect our world from magic beyond our comprehension.

All of this is completely absurd, but the film treats this not with Campellian importance or with winking-camp, but rather with a matter-of-fact acceptance. The actors deal with their world-saving (or world-killing) business as if it were just a normal pain-in-the-butt profession. And the dialogue is full of genuine wit and moments where the characters just talk to each other. The interplay between Cage and Baruchul is genuinely engaging and always amusing. They certainly don't become friends in any traditional sense, and they don't even particularly like each other for most of the running time, but they simply accept that they need each other to fulfill their respective destinies. The tone is low-key comedic throughout, and there are several laugh-out-loud lines (including a rare Star Wars joke that actually scores). Also helping things is a genuine attempt to ground the sorcery in actual scientific terms, altough the film falters slightly by stating that Dave's mastery of physics is some kind of genetic result of his magical destiny, rather than his genuine scientific interest and/or work ethic. Still, for the youngest audience members, the film's 'science is cool' message will come through loud and clear.

Ironically, despite the $150 million worth of special effects, it is the character relationships that makes this movie work as well as it does. The mentor/student relationship between Cage and Baruchul is counter-balanced by the evil Horvath recruiting the egotistical Drake Stone (Toby Kobbell), a wizard who actually moonlights as a famous stage illusionist. It's an underdeveloped idea (why would Stone want to destroy a world where he enjoys such fortune and glory?), but Kobbell makes a surprisingly winning henchman. The romantic subplot between Barachul and Theresa Palmer is more effective than expected. While Palmer does basically play the 'token love interest', she is shown to have a life of her own outside of the various adventures she gets caught up in. And while she does spend a moment or two in peril (the first such moment is played for laughs), the screenplay refuses to let her be frazzled by it, and she plays a key proactive role in the climax. But the romance itself works because the two characters are allowed to actually converse with each other. While they have known each other since the fourth grade, they have both pretty much forgotten each other until a chance present-day reunion ten years later, which adds a token realism to their new-found friendship.

Alas, that $150 million budget does intrude on our fun from time to time, especially in the action-packed, but character-lite finale (most of the big trailer moments are dispensed with in the first act and the last ten minutes). Yes, we're impressed by the giant metal eagles come to life, the fire-breathing dragons wreaking havoc in Chinatown, and the various magical bolts and fireballs that make up the wizarding weapons, but they add little to the film other than lights and noise. Monica Bellucci is absolutely wasted as a lost-love of Blake possessed by the evil Morgana, and Morgana herself (Alice Kringe) barely shows up long enough to be noticed. The action climax relies less on established character relationships and more on pointless razzle dazzle. The finale is in fact so busy that the film forgets to give Alfred Molina's chief villain a real final scene to play. It's ironic that Disney felt inclined to spend so much money on the very elements that drag the film down.

Still, The Sorcerer's Apprentice is an engaging and satisfying all-ages fantasy romp. It has wonderfully sly performances by a game cast, aided immensely by a genuinely funny script by (take a deep breath) Lawrence Konner, Mark Rosenthal, Matt Lopez, Doug Miro, and Carlo Bernard. It is the plentiful moments of quippy character interaction between Nicolas Cage, Jay Baruchul, Alfred Molina, Theresa Palmer, and Tobey Kobbell, not the giant fireballs and metallic eagles, which makes this film worth seeing. The cast is strong, the dialogue is genuinely funny, and the picture has worthwhile character arcs for at least a few of the major players. The $150 million version of The Sorcerer's Apprentice rates a solid B. I can only imagine how much better the $75 million version could have been.

Grade: B
Posted by Scott Mendelson at 1:40 PM