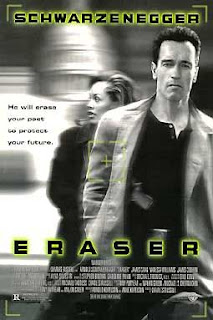 Around halfway through Eraser, there is a startling twist. The film actually falls upon... an actual scheme to be thwarted. Yes, Arnie has more to do than just kill people. That's right, he actually has to stop an arms-deal before some really mean-looking rifles get sold to the Russian-Mafia. Before this, Arnie (playing a Witness Protection Marshal, assigned to protect Vanessa Williams, who has uncovered that her company is planning to sell weapons to bad guys), basically runs about, and shoots and stabs bad guys. Of course, few go to Schwarzenegger epics for it's multi-layered plots, and the film works because Schwarzenegger, James Caan (playing a fellow agent/mentor), and Chuck Russell (director of The Mask) understand this.

When, while being ambushed by evil fiends, who wish to slay the pure and true Vanessa Williams in her place of slumber, William's ex-boyfriend walks in the house just in time to get blasted across the room by some "neato gun"(which shoots green electric bolts of aluminum at the speed of light, or something like that), we laugh and sigh in recognition; yes, that is just what happens in these movies. When Arnie, while being pursued in one of them “abandoned flame factories”, notices that his shotgun is broken, he tosses it to the stalking bad guy, who stares at it just long enough to be mistaken for our hero, who of course, was seen by a sniper to be toting a shotgun. We sigh, again in recognition, as the poor villain is blasted away by another one of those cool "neato guns". Why did the henchman stand and stare at the gun? Because, he is a bad guy in an action film, thus, he is stupid.

And, of course, no Arnold epic would be complete without scenes of Arnold getting impaled (a BIG nail, a BIG shard of glass) and shot through his arms and legs, and then, moments later having all signs of the wounds vanishing without a trace (who else besides Arnold, Harrison Ford, or Sly Stallone, could get shot in the arm, and then use that same arm to pull a damsel in distress to safety). Besides all the "fun-dumb" stuff, there are the usual Arnold staples. There is one cool stunt, involving Arnold throwing a parachute out a plane door, and then flying out the plane to catch it. There are lots of would-be one-liners/catch-phrases (my fave: after shooting an alligator in a zoo: "You're luggage."). Most importantly, there are the usual thirty-some bad guys dead in 111 min.

Overall, Eraser is big, expensive, dumb fun. The acting is exactly what we'd expect. Arnie plays a superman, James Caan plays James Caan per usual, and Vanessa Williams's part is basically to run, scream, look nervous, and look good doing all of the above. The stunts are impressive, as are the shoot-outs. Although the action does get a little gory at times (did we really need long close-ups of Arnie pulling nails and glass out of his body?), generally, the tone is light. While not nearly as good as True Lies (the best shoot-em up ever made), Eraser is much better than Last Action Hero, which is enough for me. Eraser is a throw back to the pre Total Recall era, when everyone Arnold Schwarzenneger film wasn't expected revolutionize action cinema. This isn't transformative, it's just a rock-solid action adventure picture.

Posted by Scott Mendelson at 1:03 PM No comments: Links to this post 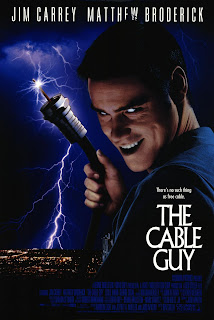 The Cable Guy will get attention for three things: for being the film that Jim Carrey first got $20 million for, the film that gave Carrey the chance to stretch, and for being the rubber-faced star's first box-office disappointment. The surprising thing is that it is a very good movie. It's Carrey's best to date and Broderick's best performance since The Freshman (a little seen masterpiece with Marlon Brando). Warts and all, it frightening character study and often uncomfortable experience. It is also arguably Jim Carrey's first film that could actually be considered art.

The Plot: When he's not watching television, Chip Douglas (Jim Carrey) works as a cable guy as a way to meet potential friends. His latest target is Steven (Matthew Broderick), a man living alone after he was turned down for marriage by his girlfriend (Leslie Mann). At first, he seems friendly but strange, taking Steven to a huge satellite dish (where he believes the entire world's cable comes from), or to Medieval Times, where Steven and Chip joust in the center ring (watch for Janeane Garfalo in a great bit as a waitress at the restaurant). But, after awhile, Steven doesn't need Chip anymore (his girlfriend has come back). Chip is deeply hurt by this and sets out to ruin Steven's life. If he can’t be Steve’s friend, then he’ll make sure that Steve never has another friend again...

Matthew Broderick is the perfect Jim Carrey foil. His calm, quiet, sane acting style blends perfectly with Carrey's anything goes method. The rest of the cast does its job well, but the movie is simply a showcase for Matt and Jim. But Chip is a truly pathetic character; a desperately, lonely man who, because he grew up in front of the television (he learned the facts of life from The Facts of Life), cannot communicate in any normal fashion. Everything Chip Douglas knows, he learned from television. Every piece of advice he gives was from the tube, every joke he heard; from the tube, in essence, he IS television (no wonder his favorite restaurant is Medieval Times, its phony atmosphere is just like something that you'd see on TV). In the end, Chip's lack of knowledge of the real world has doomed him to live alone forever.

Of course, this film is supposed to be a black comedy. It is funny at times. During the first hour, Carrey's antics are silly, as usual (his poor singing of "Somebody to Love", during a karaoke party, is amusing). Even during the final 25 minutes, when Carrey starts to go over the edge, there is always a sense of spoof in the madness. Indeed, the entire final sequence, a battle of Carrey vs. Broderick atop the giant satellite dish, is an over-the-top homage to suspense films; complete with a monsoon worth of rain. I am particularly fond of the moment where Carrey mentions that real life doesn't have good suspense music; after which he starts humming the same tune on the soundtrack, or when he holds Mann hostage with... a staple gun. Best of all is a very funny subplot about a murder trial on the tube with former child sitcom star Stan Sweet (Ben Stiller) accused of murdering Sam Sweet (Ben Stiller), after their sitcom was canceled and they joined a religious cult. (Stan claimed repeatedly on the 911 call that Asians killed his brother; a none-too-subtle swipe at the Susan Smith case).

Broderick once again proves he is a master at effective under acting, and Carrey proves he can play both good and evil. While the film is very funny, it was the creepy elements that entertained me. I’ll remember Chip Douglas much longer than I’ll remember Stanley Ipkiss or Ace Ventura. In essence, The Cable Guy is Jim Carrey’s equivalent to John Wayne’s The Searchers and Humphrey Bogart’s In a Lonely Place. Like those two classics, the star of the moment allows his iconic larger than life image to be placed in the real world, where the attributes that defined them in less realistic environments render them sad and terrible people. In The Maltese Falcon, the Bogart tough guy was one to be admired. In In a Lonely Place, he is to be feared, despised, and pitied. In essence, Chip Douglas is the character of Ace Ventura placed in reality. And it isn’t funny at all.

Grade: B+
Posted by Scott Mendelson at 12:01 PM No comments: Links to this post