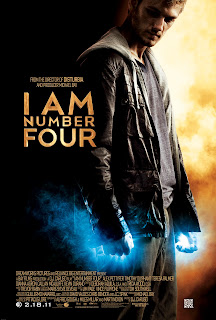 I Am Number Four is a film that seems to want to be better than it is, but feels hamstrung by the hopelessly generic narrative at its core. Based on a novel by James Frey and Jobie Hughes, the film basically tells a variation on the Rosewell/Smallville/Twilight formula, with all of the reverence that seemingly goes hand-in-hand with such soulful teen outcast stories. But director D.J. Caruso refrains from playing around with the formula for most of the picture, either too lazy or too afraid to put a unique spin on the contrivance at play. After all, Catherine Hardwicke inserted a knowing snark and self-mocking humor into the first Twilight picture, and was fired from the franchise for her troubles. Up until the last act, I Am Number Four is all-too content to merely 'go with the flow'.

A token amount of plot: Nine refugees from the annihilated alien world Lorien have found their way to Earth. Hot on their tail is the murderous species that wiped them out The first three have already been killed, leaving 'John Smith' (Alex Pettyfer) as the next target. On the run with only his protector (Timothy Olyphant) to trust, 'Smith' hides out in a small Ohio town and quickly makes friends with the local outcast (Callan McAuliffe), enemies with the school bully (Jake Abel), and a romantic connection with the local quirky photographer (Dianna Agron). As John finds himself becoming more emotionally invested in his newest refuge, he must decide between fleeing his new love or facing down the enemy that is relentlessly pursuing him.

As you can tell from the plot summary, the storyline is arguably as generic as humanly possible. Agron does what she can with an underwritten role (she has one of the warmer smiles of any actress in her age-range), and the script does give her moments of world-weary intelligence, but in the end her character is merely 'the girl', and the film leaves her absolutely stranded during the action finale. Yes, it's great that she doesn't become a hostage in the climax, but she literally could have been removed from the entire end of the movie without being missed. Our would-be alien savior isn't exactly a well-written character either, as Alex Pettyfer has little to do other than brood and whine about his refugee status to a relatively uncaring Olyphant. And since most of his powers are of the 'make CGI appear out of my hands' variety, he doesn't even get to do much ass-kicking when the time comes.

For much of the first two-thirds of the picture, the only moments of amusement come from the maliciousness of lead-baddie Kevin Durand and a genuinely amusing sequence where Pettyfer is invited for an impromptu family dinner with Agron's parents. Mom (Judith Hoag from Teenage Mutant Ninja Turtles) and dad (Cooper Thorton) are refreshingly written as a genuinely entertaining and loving family unit, and the film briefly lifts itself out of its by-the-numbers stupor when they are doing their best to harmlessly embarrass their daughter. Like the somewhat similar Twilight franchise, the film is at its best when it focuses away from the earnest-but-dull love story that is supposed to captivate our interest.

The film does finally come to life during the third with the introduction of Teresa Palmer as the bad-ass 'number six', who rides to the rescue and precedes to shame the rest of the morose brooders. At this point, right at the end, the film becomes the kind of whacked-out extravaganza it should have been from the beginning. We get bad guys laying waste to the local high school, some gruesome (implied) violence, giant monsters doing battle with our heroes and each other, and Palmer snarkily flying around while basically mocking and/or apologizing for the pretentious self-seriousness that proceeded her entrance. Unfortunately, her overpowering presence just highlights how weak the rest of the main gang is, and casts an even sorrier light on the core romance (IE - Why should Superman settle for Lois Lane when you can have Wonder Woman?).

Of course, the final thirty minutes or so do not redeem a relatively bland and uninspiring picture, but it does end the film in a place where a sequel might actually be worth watching. Had the rest of I Am Number Four had the self-acknowledging cheekiness of its last couple reels, we would have had something worth recommending. Unfortunately, the proceeding 70 minutes are just not good or entertaining enough to give it a pass based on the triumphant ending. The underwritten leads are stranded for most of the film while the more colorful supporting characters (Palmer, Durand, etc) dominate the proceedings. Ironically for a film that is technically about and aimed at teenagers, it's the grownups who eventually need to school these youngins' in proper genre fare.

Of all the reviews I read so far, yours is by far the best! You put down everything I thought about it, and how! I don't actually aim to be a film critic, but I hope I can review stuff so well one day!