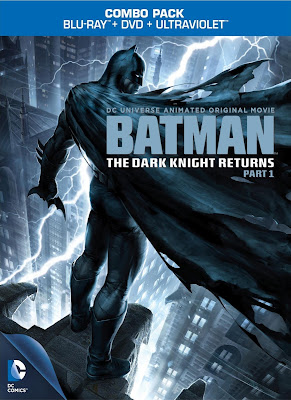 I don't know if an animated adaptation of Frank Miller's groundbreaking satire was entirely necessary.  There is little ground in this 1986 graphic novel that hasn't been covered in other mediums or other comic book stories in some form or another, be it The Dark Knight Rises or the Batman: The Animated Series episode "Legends of the Dark Knight".  At heart, this project seems predicated merely on the idea of 'well, we might as well adapt it because we've adapted Batman: Year One.  But this new film, which covers the first two chapters of the four part story, is a genuine improvement over the prior Frank Miller adaptation.  It is less beholden to the source material and willing to make small changes for the sake of the film as a stand-alone entertainment.  The script is 90% faithful to the original, and the changes have an unusual effect of making the story feel less like an Elseworld (which it of course was) and more like a somewhat plausible 'What If?' final Batman story.

As for the plot, I'm guessing 99.5% of you reading this have already read the graphic novel or at least are aware of its basic idea.  In short, Batman has been retired for ten years, arguably due to the death of Jason Todd while in the line of duty as Robin (something that was written two years before it happened in the actual "Death in the Family" storyline).  But the emergence of a heartless and vicious street gang known as the Mutants propel Bruce Wayne, now in his fifties, back into action.  The big hook of the story back in the day was its the sheer darkness and cynical narrative.  While I've long argued that the real 'return of the Dark Knight' occurred in 1969 when Denny O'Neil; and Neil Adams returned the Caped Crusader to his roots, there is little doubt that Miller's story took it even further.  And while I've long disputed Miller's quote that "I gave Batman his balls back.", Miller does get credit in this story and Batman: Year One for making Commissioner Jim Gordon into a worthwhile supporting character.

Watching this story, and re-reading the source material, one is struck at how much of the most grotesque violence is either completely offscreen or merely referred to in past tense via news reports ("This just in, The Mutants have murdered Santa Claus and have kidnapped the Easter Bunny!").  Thus, with a few (very small) narrative changes that occur in this film (for example, Batman no longer guns down a mutant with a machine gun during a rescue), The Dark Knight Returns actually functions as a plausible end-time for any number of established Batman universes (although probably not the Adam West 60s television show).

The biggest change is the removal of the interior monologue that peppers the original book.  It's a welcome change, as Batman: Year One was basically readers' theater, although the loss of the narration does cost us some of Batman's more empathetic moments (for example, his genuine concern for Harvey Dent is lost in translation).  Ironically, one of the biggest problems with The Dark Knight Rises (that Batman basically has to build himself up, only to get knocked down and build himself up *again*) shows up here as well, albeit in a truncated and thus less problematic fashion.  Watching this picture reminds us of how little Nolan and company milked the proverbial return of the Batman for any kind of city-wide excitement or joy.

While the vocals are rock-solid if unmemorable (not a bad thing per se, as we don't spend our time playing 'guess the voice' and we're never taken out of the story), the most important thing is that this picture *moves*.  It is far more cinematic than Batman: Year One and feels more like an actual animated motion picture as opposed to a glorified motion comic.  And as with all groundbreaking satire viewed decades after the fact, one cannot help that the sometimes gruesome violence and graphic bloodshed no longer feels overtly sensational compared to the comics that followed in its stead.  I've long complained that a generation of comic readers and comic writers took Miller's hardcore Batman as gospel rather than exaggeration, something Miller himself brilliantly satirized in his All Star Batman & Robin (which gave rise to the classic catchphrase "I'm the god-damn Batman!") and watching this film twenty-six years later only proves that reality, both in terms of its content and its political subtexts, caught up with satire all too successfully.

The Dark Knight Returns part I delivers exactly what it promises and little more.  It does indeed bring the Frank Miller comic to animated life with as much faithfulness as can be expected.  Writer Bob Goodman and director Jay Oliva take pains to make sure the film works as a stand-alone piece of entertainment and aren't afraid to make small changes when they are required.  The most effective change comes right at the end, where a blink-and-you-miss it first act moment is moved to the end for a rousing cliffhanger.  If I prefer the first half of this film to the second half, it is only because I prefer books 01 and 03 to chapters 02 and 04.  The highest compliment I can pay this film is that it justifies itself, and that I can't wait for the first half of The Dark Knight Returns part II. 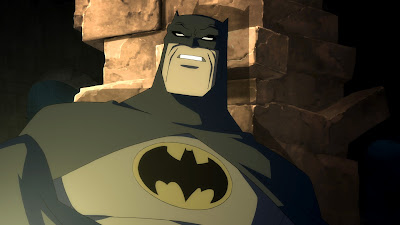 The film looks and sounds great per usual, but the extras are surprisingly skimpy.  Aside from the usual previews, sneak-peaks (where we see just who is playing a major character from the next part of the story), animated episodes (Batman: The Animated Series episodes "Two Face" parts 1 and 2), we get just three features, only two of which are worthwhile.  The first is a 30 page chunk of The Dark Knight Returns in digital comic form.  There is also a thoughtful and intelligent 13-minute featurette which is obstinately about the character of Carrie (IE - the female Robin) which in turn becomes a discussion about the role of female characters, for better or worse, in mainstream comics.  The big bonus feature is a 39-minute documentary about the life and times of Batman creator Bob Kane.  While I could once again whine that Bill Finger doesn't get enough credit, save for references during the first five minutes, this is an educational, entertaining, and touching ode to Mr. Kane.  Be it an explanation of how Bob Kane actually managed to not get ripped off by DC Comics in the early days to the spirited recollections of Stan Lee mourning the lost opportunity to compare Tim Burton's Batman with Sam Raimi's Spider-Man, this is a must-watch for fans.

So, the movie is frankly better than I expected and the audio/visual presentation is top-notch per usual.  As for the slim extras, there are fifty-minutes of decent material and I can only hope that they are waiting for the second chapter to really discuss the iconic original text in all of its complicated glory.  This one comes out September 25th on all of the usual formats, although nearly all of the above extras are only on the Blu Ray.  Use your judgment, but I'd recommend a purchase, or at least a rental on the chance that Warner Bros. does a gimmick reissue for both versions down the line.
Posted by Scott Mendelson at 8:29 AM

Is Ronald Reagan in it?

Nope, but I don't think he shows up until the second half of the story, which comes out early 2013. It still seems to take place in the 1980s, as Gordon still references living through World War II.

I was over at a co-worker's house from DISH and got my first glimpse of The Dark Knight Returns, and it looks like an awesome comic book film. I did read the Miller's work in the past, and from what I saw, this looks like a worthy on screen adaptation. I can't wait to start watching it myself in the comfort of my own home. I'm a huge Batman fan, so I added it to my Blockbuster@Home queue. When I started using Blockbuster I found that it was a much better value than any other rental service because of what options you get for the money.