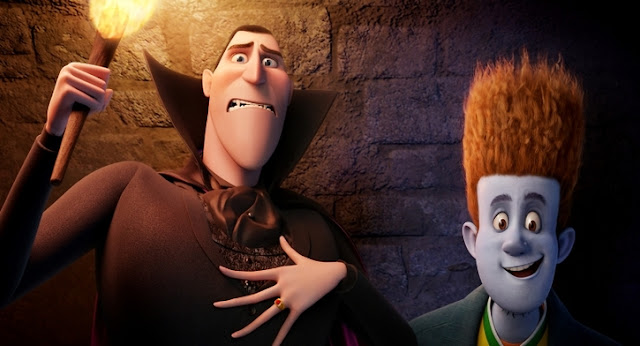 As always, for historical trivia and additional context on the week's new release, John Gosling spells it out HERE.
While the whole 'measure the cumulative weekend box office' trend is usually stupid if not dangerous, I must admit that this is indeed an 'everybody wins' weekend.  Sony had the top two films, with one setting a record and the other merely opening in line with realistic expectations.  Hotel Transylvania scored a whopping $43 million this weekend, which at the very least crushes the previous September record, the $36 million debut of Sweet Home Alabama back in 2002.  The Genndy Tartakovsky (Dexter’s Laboratory, Samurai Jack, those snazzy Star Wars: The Clone Wars shorts)-helmed pic had a rather large 3,8x weekend multiplier, going from an $11 million Friday to a $19 million Saturday.  In other words, it performed how a non-frontloaded non-sequel animated film is supposed to perform.  Among animated films that aren't sequels/spin-offs and weren't release by either Dreamworks or Disney/Pixar, this opening actually ranks rather high.  If you count the two Dr. Seuess adaptations (The Lorax with $70 million and Horton Hears a Who with $45 million), Hotel Transylvania is the fifth-biggest non-sequel/spin-off animated opening not released by the two animation titans.  If you only count wholly original properties, then it trails only Despicable Me ($56 million) and the first Ice Age ($46 million) and comes in just ahead of Warner Bros' Happy Feet ($41 million).
If you count it as an Adam Sandler vehicle (and it was arguably sold as one), then this is Sandler's second-largest debut, behind The Longest Yard ($47 million) and just ahead of the $42.2 million opening of Anger Management.  Among those older than 12, the picture played 60% female and 30% under 25. 76% came from families and among the under 12 set it played 52% female and 75% under 10 years old.  The film cost Sony between $85 and $100 million, still almost a bargain as far as mainstream animation goes.  It opened higher than every 2011 animated film save for Cars 2 and Kung Fu Panda 2 and but 2012 has done a better job of spreading out their animated fare (we of course remember the great glut of Spring 2011).  The last time Sony hit the animation jackpot was around this time 2009, when Cloudy With the Chance of Meatballs opened with $30 million and went on to earn $124 million domestic and $243 million worldwide.  Not even counting the larger presence of 3D auditoriums worldwide three years later, a similar path would give the new film $177 million domestic and $349 million worldwide.  Point being, this is a big win for all involved, even if Frankenweenie steals its thunder next weekend. 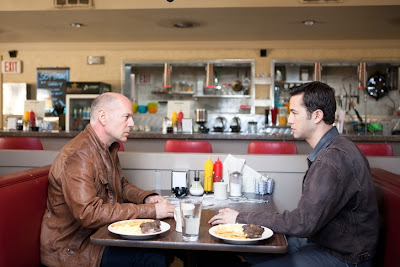 Also coming from Sony (courtesy of Tri Star) was Looper (review), which earned $21.2 million.  The well-reviewed picture had a strong 3.0x weekend multiplier.  The Bruce Willis/Joseph Gordon-Levitt/Emily Blunt time travel thriller played 59% male and 70% over-25.  The number is right in Bruce Willis's normal wheelhouse while it's easily the biggest debut for Gordon Levitt that doesn't involve Chris Nolan and/or a blink-and-you miss it appearance as a mostly masked Cobra Commander.  The $60 million picture was a rare example of geek/online interest actually translating to general audiences, as geek-friendly bombs like Dredd (-64% this weekend for a $2.8 million weekend and $10 million cume) and Scott Pilgrim Vs. the World are more common.  It earned a general B from Cinemascore and a B+ from males.  The big question now is whether or not the film will have legs.  Normally I'd say yes, with a multiplier of at least 3x the weekend, but there is a lot of adult genre fare over the next couple months, starting next weekend with Taken 2 and following up with Argo, Seven Psychopaths, Cloud Atlas, and Alex Cross further down the month.  Still, this is a good weekend for Sony, even as Resident Evil: Retribution continues to fall fast here, taking in $3 million and ending weekend three with $38 million.  Fortunately it's going gangbusters overseas, which was kind of the point. 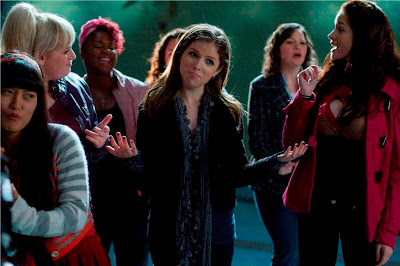 The surprise success story of the weekend was Universal's platform release for the Anna Kendrick/Rebel Wilson comedy Pitch Perfect.  Sold as 'Bring It On meets Glee', Universal opened this surprisingly well-reviewed picture (I passed on numerous press screenings because I listed to the one fellow critic who didn't like it... whoops) on 335 screens, a real risk in this frontloaded era.  But a deluge of preview screenings and strong buzz powered this one to a stunning $5.2 million gross and a $15,000 per-screen average.  The $17 million film played 76% female and earned an A+ from women under 25.  The picture goes wide next weekend and expect it to succeed in ways that sadly Whip It could not.  Frankly, I can't recall a film making that much on that few screens since Paranormal Activity earned $7 million on 200 screens just over three years ago.  Come what may, the film's performance is yet another promising sign, along with the blockbuster success of Mission: Impossible: Ghost Protocol, towards the eventual end of the 'opening weekend is everything' mentality.  Fairing less well in wide release was Won't Back Down.  Sold as an inspirational 'let's fix our public schools' melodrama, word got out that it was actually right-wing propaganda that blamed teachers unions for everything and tried to sell charter schools as the answer.  I'm not sure whether a Viola Davis/Maggie Gyleenthal social issues drama would have been a blockbuster without the controversy, but it probably didn't help.  Anyway, the film earned $2.7 million so it's pretty much finished before it can begin.
Not much holdover news, but Perks of Being a Wallflower successfully expanded this weekend, earning $1.1 million on 102 screens.  It earned $11,000 per-screen and an A from Cinemascore.  It played 70% female and 56% over 25.  The Summit release continues to earn solid buzz and goes wide next weekend.  The Bourne Legacy won't break $120 million here, but it has earned $224 million worldwide, surpassing the $214 million gross of The Bourne Identity.  Arbitrage is sticking around, having passed $5 million this weekend.  Still, a wide release for this purely commercial film would have easily netted a $10 million debut just a few years ago.  The three major wide releases from last weekend all had 35%-42% drops, with Trouble With the Curve, End of Watch, and House at the End of the Street have now grossed (respectively) $23 million, $26 million, and $22 million.  The Master is proving to be a for-arthouse fans/film geeks only affair, with $10 million after seventeen days.  Still, it got made and went wide, which is the real victory.  Finally, Robot & Frank topped $3 million this weekend.  I'm telling you this because you really should see Robot & Frank.

Join us next weekend when Liam Neeson saves his family yet again in Taken 2 while Tim Burton remakes his own stop-motion short film from 30 years ago with Frankenweenie.
Scott Mendelson
Posted by Scott Mendelson at 9:26 AM