Shouldn't once be enough? Are movies like (allegedly) The Master that *require* multiple viewings playing fair? 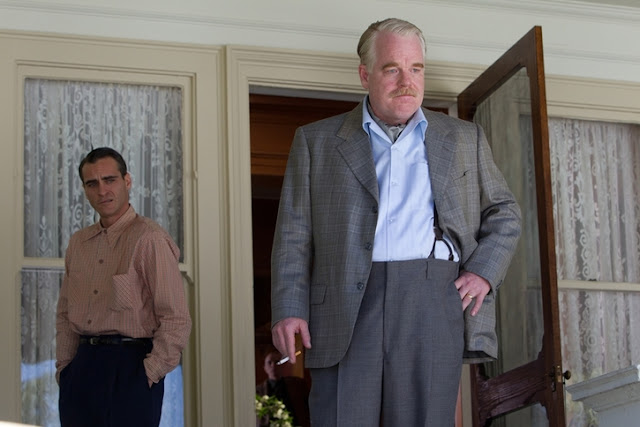 Having had to miss the press screenings that I was invited to for family and work-related reasons, I will likely be checking out Paul Thomas Anderson's The Master at tonight's 7:15pm Landmark show (I already bought a ticket to the sold-out show, but it depends on when my wife gets home from work tonight and what the traffic's like).  Truth be told, I probably would have waited until next weekend when the film went wide if not for A) I want to see this thing in 70mm and B) there are approximately 700 new films opening next weekend.  As I've said before, when one plays in the critical circles, you can feel like the last person on Earth to see a movie merely by waiting until opening night.  I may or may not offer a review of the picture this weekend, depending on my schedule and whether or not I have anything new to offer to the critical conversation.  More importantly, I can only hope that I get enough out of the film from only seeing it once.  Much of the punditry I've read over the last month has stated that the film can't be fully appreciated in a single viewing.  The question I'm asking this morning is whether that is a fair standard for a film to be held to?  Point being, even in an era when it's easier than ever to rewatch movies, be it in theaters or home-video formats, what responsibility should a filmmaker have to make sure his or her film can be appreciated and digested on a single viewing?  And perhaps more importantly, should "Oh you need to see it twice!" be a fair defense if a film doesn't quite work the first time around?

I throw out this question without having an answer.  But it is motivated by the fact that, since having a family and taking on adult responsibilities, I find it sometimes challenging to see the films I want to see in theaters *once* let alone multiple times.  Even when said pictures come to DVD, I find myself preferring to catch up on stuff I missed, be it movies or television series that I had meant to watch, rather than rewatch something that I had only recently seen.  Confession: I have not seen a film twice in theaters since May 2008, when I took my dad to see Indiana Jones and the Kingdom of the Crystal Skull while he was in town for a few days.  Before that it was seeing Live Free or Die Hard with my in-laws as an afternoon social engagement.  It's a matter of time and priorities.  There are recent films I've seen more than once in DVD or Blu Ray, but they are somewhat few and far between.  And frankly it's more likely to be popcorn entertainment like Captain America or Quantum of Solace than There Will Be Blood.  I presumed that my appreciation for Inception (a prime candidate for the 'you need to see it twice!' defense) would grow when I finally saw it for a second time on Blu Ray, but I actually found it a little less engaging.

On the other hand, having come to terms with what was *not* in Harry Potter and the Deathly Hallows part II, I was better able to appreciate how good the actual film itself truly was.  In all of these years, I've only reversed opinions twice to any notable degree.  An initial viewing of Unbreakable left me a little cold, more appreciative of the skill than overwhelmed by the result.  But the second viewing, with all of its secrets unearthed, was an absolute blast and turned it into one of my favorite films of the prior decade.  The Brad Pitt/Harrison Ford IRA drama The Devil's Own didn't quite wow me as expected, but a home video viewing months later allowed me to truly appreciate the subtle character work and mournful overtones in a still underrated little gem.  There have been films that have bumped around the quality meter over the years.  The nitpicks of The Dark Knight don't bother me as much and I didn't truly appreciate Finding Nemo until I could view it in the context of a decade's worth of Pixar films past and future (while not my favorite, I now firmly believe that Finding Nemo is Pixar's best film, objectively speaking).  Without stepping on Brandon Peters's toes, I too recently rewatched the 007 films over the last year or so and have come to realize that the Sean Connery films aren't *that* great while the Roger Moore films aren't anywhere near as bad as their reputation.

But the question is whether films, be they great or terrible, should out-and-out demand multiple viewings before writing a worthwhile critical analysis or even forming an education opinion about them?  I'm not talking about movies so good you can't wait to see them again (Cabin In the Woods in just under a week...!), but rather dense and ambitious films that theoretically require a second viewing.  Do those films really require a second viewing or is that just a way for critics to either explain any their initial discontent with something they expected to love or a way for certain critics to attempt to elevate their opinion about the fray?  "I've seen it three times now, so here's what I think about it...!".  I no longer have the luxury of immediate repeat viewings.  That's ok, I'd prefer to see more movies that fewer movies multiple times, which is a pretty striking change in priorities if you look at my DVD collection.  I'd argue that while some films should have new pleasures that come with a second viewing, that they shouldn't explicitly require multiple viewings to enjoy or digest.  But I sincerely hope that my single viewing of The Master is rewarding enough to not demand a second viewing.  Because for me and others in my boat, once isn't just enough, but it's usually all I get.

Auteurs do not care
If you can't see it again.
If it works, it works.

My favorite films, and Anderson's rank among those, are fulfilling the first time out, but carry the weight to make repeat viewings worthwhile.


To be honest, I am a little bit unclear as to whether your question is regarding the filmmaker's intentions, or the critical community's defense mechanisms.


My opinion is that there is no such thing as "fair" as far as a filmmaker's intentions go. I take a risk when buying a ticket. If it turns out the filmmaker does not pay off what I expect for the price of a ticket, then I learned my lesson about that filmmaker. I guess I would hate to have a world without the potential of movies that work like great puzzle pieces.


As far as critics are concerned, "I've seen it five times" is fine, as long as they tell us how they experienced it the first time.