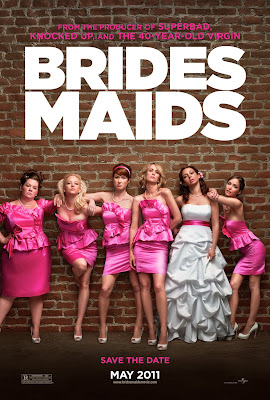 The highest compliment I can pay to Paul Feig's Bridesmaids is that it is a triumph regardless of its alleged social importance.  I'm not going to get into the hand-wringing about its importance as a feminist statement or 'proof that women can be funny' (does ANYONE in the film industry watch TV?) because I'm not going to insult those who wrote and directed this picture.  It is merely a very sharp and observant comedy that happens to contain a primarily female cast of comedians and actresses.  It is arguably the best Apatow-produced picture so far, easily the best comedy of the year and one of the best films of the year, and a genuinely thoughtful and moving bit of comic cinema.

A token amount of plot: Annie (Kristen Wiig) is falling apart at the seams.  Undone by the economic failure of the her bake shop, she is stuck in a dead-end sales job, romantically single, and miserably unhappy at the lot life has dealt her.  So when her best friend Lillian (Maya Rudolph) announces her engagement and asks Annie to be her maid of honor, it is less a moment of celebration than an acknowledgement of her own personal failures.  The fear that she is losing her best friend due the march of progress is only worsened by the presence of the seemingly-perfect Helen (Rose Byrne), who uses her seemingly unlimited wealth to give Lillian the kind of pre-wedding festivities that Annie could never muster.  But Annie's attempts to hold onto her title as Lillian's 'best friend' only make the situation worse.  Comedy, sometimes painful and awkward, but comedy nonetheless, does ensue.

First and foremost, the film is indeed quite funny.  While most of the press has focused on the bawdier and/or vulgar bits, its greatest strength lies in its verbal humor and genuinely solid dialogue (the film is written by Wiig and Annie Mumolo).  In fact, some of the more overtly vulgar and/or slapstick moments feel shoe-horned in, either by those who wanted something to put in a red-band trailer or by those who wanted to make some kind of 'see, women can do gross-out humor too!' statement (which is not to say said bits don't merit laughs...).  But the film is strongest when it focuses on its relatable characters and their plausible circumstances.  Kristen Wiig carries the picture and it is a testament to her underused skills as an actress (as opposed to an over-the-top sketch performer) that she makes Annie instantly sympathetic despite her obvious character flaws.  As the film opens, Annie has been so shat on by the cruelty of others and the whims of fate that she has ceased being a particularly nice person herself.  Wiig nonetheless instantly invests us in Annie's plight without begging for our sympathy.  It's a dynamite star turn that, if Bridesmaids were a 'serious prestige drama', would merit widespread talk of an Oscar nomination.

The rest of the cast is on hand for support, comic and otherwise.  Maya Rudolph basically plays the straight woman, arguably the McGuffin of the picture per-se, as Wiig and Byrne battle for the role of Lillian's very best friend.  Rose Byrne blessedly refuses to make Helen into a villain, as she is basically the kind of person that is so used to running things that it doesn't even occur to her that she's stepping on Annie's toes.  Helen's third act arc feels a bit dropped it, but it gives her a couple more shades to play and does little harm.  Ellie Kemper and Wendi McLendon-Covey get the least exposure, as the film lets them mainly interact with each other (McLendon-Covey is a stressed and bored wife/mother, while Kemper is a newly married would-be innocent).  Melissa McCarthy gets much of the scene-stealing yucks and will probably get the biggest boost from the film.  She gets the coveted John Belushi role (albeit with more wisdom) and runs with it.  Jill Clayburgh shines in her brief moments as Wiig's mother, and it's a hell of a curtain call for the recently deceased legend.

The film works as a genuinely compelling character study, as well as a thoughtful meditation on the whole 'best friends stay close forever' myth that, quite frankly, seems to be the stock-in-trade of many female-driven comedies.  Annie and Lillian's relationship, and the honesty in which its portrayed, most resembles the JD/Turk friendship over the eight years of Scrubs (I don't count Scrubs: the Goliath Chronicles), as they went from best friends and roommates to close colleagues to old friends who saw each other on holidays and special occasions.  In terms of her relationship with Lillian, she is not so much fighting for the role of best friend as she is fighting against the various ways that life changes our friendships.  And while the film is not primarily about romance (a trait that usually only applies of late to female-driven films that star young teenagers, re- Mean Girls, Akeelah and the Bee, and Sisterhood of the Traveling Pants), the budding relationship between Annie and Chris O'Dowd's Rhodes is surprisingly sweet and honest.

Bridesmaids is a genuinely terrific film that works on all levels.  It's funny, emotionally engaging, and genuinely insightful.  Kristen Wiig comes into her own as a genuine movie star, showing that the dramatic chops she showed in Whip It were no fluke.  The film excels by treating its characters as seriously as its jokes.  It refuses to soften its main character while refusing to villainize others.  It is an all-around triumph that frankly ennobles its genre.  Bridesmaids is a genuinely hilarious comedy, a fine character study, a terrific chick flick, and a great film.

Love this film. And it's so much more than a chick flick. Is The Hangover a dick flick? Or An R rated Comedy? I think Bridesmaids is by far one of the funniest films in the last decade. Funnier than The Hangover due in large part to the honesty of the relationships portrayed on screen, and a stellar screenplay with truthful dialogue all the way through. I plan on seeing it again :)

I had long ago tired of the male-driven Judd Apatow brand of profane humor mixed with seemingly insincere sentimentality so "Bridesmaids" is a terrific anti-dote for the that style of humor that has been so prevalent for the past six years. The movie is funny and almost poignant in a way that is more saddening than sentimental. Wiig is very good in the film, and I agree that her performance is equals parts comedic and dramatic. Her character has believable, real-world problems, and that alone is more groundbreaking in a Hollywood comedy than any feminist perspective being taken.

It's a tough decision. I've occasionally argued against using the term 'chick flick', as I wondered whether it was merely a term used to disguise female-driven films that used their label to excuse their lack of quality. But a good 'chick flick' is still a good flick. The Hangover is also a very funny 'dick flick' (I like that...), albeit one that succeeds for entirely different reasons than Bridesmaids (The Hangover scores as a well-written and tightly plotted mystery, while Bridesmaids is more a dramatic and emotionally-charged character study).

I don't doubt the sincerity of Apatow's previous films, although I liked some of them better than others (offhand, Super Bad is dynamite, Walk Hard is a terrific ZAZ-type satire, Forgetting Sarah Marshal is charming and thoughtful, Knocked Up works purely for the Leslie Mann/Paul Rudd relationship, and Funny People is a noble failure). I've never bought into the whole 'Apatow writes sexist female characters' riff, as all of his major characters are allowed to be flawed and somewhat three-dimensional (again, I offer Mann in Knocked Up). If you want examples of two 'Apatow-ish' films that one-upped Judd himself, check out Role Models and I Love You, Man (yes, Paul Rudd indeed elevates this kind of material). Both are bawdy, but sweet, intelligent, and character driven, where everyone is sympathetic and there are no villains.

I think you mixed up Ellie and Wendi.

I don't know what you're talking a... LOOK MONSTER! It looks okay to me! (seriously, thank you for catching that)