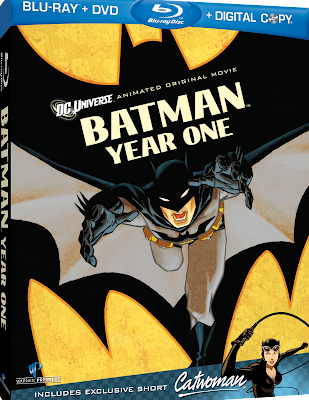 Batman: Year One
2011
64 minutes
rated PG-13
Available for download on October 11th, available to purchase on October 18th from WHV

The ideas and concepts first found in Frank Miller's Batman: Year One have been so pilfered through and copied over the last 25 years that it feels a little strange to see this work adapted for film without any narrative alterations.  It feels like less of a stand-alone movie and more of a time-capsule of sorts, a touchstone to one of the more important comic books of its generation.  What works in the book still works in the movie, although this rigidly faithful adaptation exposes the problems of adapting a relatively literate comic book into an action picture.  The film is so visually and narratively faithful that it often resembles a high-end motion comic.  For those who have never read the original story, the film works as a rock-solid Batman origin story which remains one of the better Jim Gordon stories.  And for those who have always wanted to see this tale translated to film (animated or live-action), you'll get what you paid for.  Batman: Year One is a faithful adaptation of Frank Miller's four-part series, but its slavish devotion threatens to render it not particularly necessary.

For the four of you who don't know, Batman: Year One concerns the first year of Batman's crime-fighting existence, who coincides with the first year that Jim Gordon spent as a cop in Gotham.  The emphasis is on political corruption and the rot that graft and crime has turned Gotham into.  There are no super villains just yet, as Batman's attention is focused on common street criminals and the corrupt politicians and police department that allows them to fester.  Much of the story consists of the running internal monologues of both Bruce Wayne (Ben McKenzie) and Jim Gordon (Bryan Cranston).  James Gordon is the true star of the story, as his dilemma towards being tasked to capture a vigilante who is more honest and helpful than the cops themselves takes center stage.  I've long argued against the lie that Frank Miller single-handedly saved Batman from decades of camp, but few can deny that he more-or-less invented the modern Jim Gordon as we've known him for 25-years since.  While the vocal work is fine, too much of the ongoing thought bubbles are kept in the onscreen translation, even when it ends up providing exposition for actions we see onscreen or character development we can clearly see for ourselves.

Looking at the picture objectively, much of the film is basically Jim Gordon or Batman thinking to themselves.  Despite their starring roles, I'd doubt that Batman or Gordon have more then twenty lines of actual spoken dialogue combined.  That is something that doesn't stand out as much on a page, as the internal and external dialogue tend to blend together into a fine stew.  But similar to the live-action adaptation of Frank Miller's Sin City (which, to be fair, this is far superior to), this version loses points for relying too much on the internal expository voice over that was vital to the page, but less so for the actual motion picture.  Still, the action scenes are beautifully animated and are generally delivered in long, fluid 'takes'.  The animation overall is pretty appealing, with a sparse level of detail that will remind some of Batman: the Animated Series.

Regardless of its flaws as a stand-alone movie, this remains a painstakingly faithful adaptation of one of the most popular Batman stories every written.  As such it retains the compelling narrative and potent characterization that made it a classic.  If that is what you crave, then you will most likely walk away quite satisfied.  But in the end, it is less a movie to exist of its own accord than a proverbial time capsule for its source material.

The Extras:
There aren't as many dots on the back of the package as on recent DCAU films, but the emphasis here is on quality over quantity.  Aside from the usual digital copy and standard-definition version of the second disc, the extras are a solid mix of fun and insight.  We have a crew commentary, where Alan Burnett, Sam Liu, Mike Carlin, and Andrea Romano discuss their artistic decisions and their fond memories of this perennial classic.  We get a 26-minute documentary entitled "Heart of Vengeance: Returning Batman to His Roots", which explains just that.  To its great credit, the featurette explicitly credits Julie Schwartz, Dennis O'Neil, and Neal Adams with returning the Darknight Detective back to his pulpy origins.  While Frank Miller's influence takes up much of the running time, the piece does not sell the oft-repeated lie that Frank Miller's The Dark Knight Returns single-handedly saved Batman from the camp period (1944-1969, but popularized by the Batman TV show in the late 1960s).

There is a forty-minute piece Conversations With DC Comics: Featuring the 201 Batman Creative Team.  As expected, this is a chit-chat delves into how the current creative team (I don't know how current, I have not been keeping up with the whole New 52 thing) feels about the Batman character, what their childhood memories are regarding the comics, and how Frank Miller's two major works influenced the title in mostly positive ways.  We also have digital comic of the first chapter of the actual Batman: Year One comic book.  There is also the standard previews for prior DCAU movies and a ten-minute sneak peak at the next one.  In this case, the old Justice League voice cast  reunites to do a loose adaptation of the Justice League comic story "Tower of Babel".  Unfortunately, Phil Lamarr's Jon Stewart was subbed out for Nathan Fillon's Hal Jordan while Superman: the Animated Series's Tim Daly replaces George Newbern who, ya know, actually did the voice of Superman for the actual Justice League cartoon.  Aside from that, it looks like a terrific little movie with one of the better JLA stories behind it.

We have two bonus cartoons from Batman: the Animated Series, both featuring Catwoman.  "Catwalk" is easily the best Catwoman episode of the series, which sadly isn't saying much, while "Cult of the Cat" is one of the weirder episodes.  I would have added or substituted "You Scratch My Back" (which features the whole Bat-family tussling with Catwoman), but that's just me.   The last and arguably biggest extra on the disc is a 15-minute short cartoon starring Catwoman.  Written by Paul Dini, the piece is undeniably exciting and occasionally funny (the opening moments of hardened gunmen furiously trying to gun down a kitty cat is hilarious), but the opening act puts so much adolescent emphasis on suggestive tits-and-ass that I actually was embarrassed to be watching it with my wife (it doesn't exactly make us comic fans look very evolved).

The movie is pretty good, and the extras are a solid bunch, while the disc looks and sounds great.  So yes, this is definitely worth a purchase if you're a fan, and a rental for those who merely like solid crime stories or comic book adventures.
Posted by Scott Mendelson at 3:00 PM

Sad to hear that its not more of a cohesive movie but I'll still be picking it up.

Also its "Fillion" not 'Fillian', for shame Scott, might have to lose a bit of geek cred for that.

Good points about this being honest to the source material. I felt it is more recommended for days when you just wish to catch Batman in a pure classical format, noire and all. The focus on Gordon is really the strength of this book and the film gives him enough space and attention. Some really nice touches and cuts make this a tight watch, I would love to revisit it some day.