What Real Steel does right in the realm of blockbuster filmmaking... 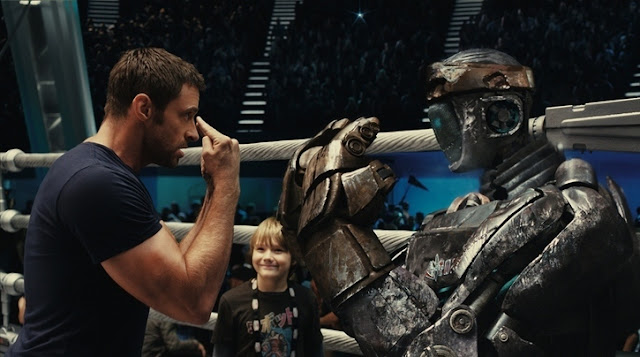 Real Steel is not a great movie.  It's barely a good one, and as I've joke elsewhere, it's basically so shamelessly recycled from other movies that it qualifies as environmentally-friendly.  But it does do one thing quite right, one thing that makes it stand out and serves as a token reminder when it comes to making these big-budget genre pictures.  There has been much debate about the film's budget.  Rival executives claim it cost $140 million, while director Shawn Levy claims it cost just over $80 million.  Now that I've seen the film, I can confirm that I am more likely to believe Levy himself.  I don't mean that as an insult, quite the contrary.  Despite the fact that it takes place in the world of robot-boxing, it is a (relatively effective) human drama first and a robot-smashing spectacle second.  If the film did end up costing $140 million, than something went horribly wrong during production.  I say that because the movie feels and looks cheap, and I mean that in a good way.

The focus of the movie is not on the various fighting machines, but rather on the relationship between Charlie (Hugh Jackman) and his long-lost son (Dakota Goyo).  The robots are merely there merely because that is the world that Charlie lives in.  We generally only see the robots when it is relevant to the plot.  They don't have personalities, they don't have character arcs, they exist purely as tools of the specific trade.  The film contains (I think...) five robot fight scenes during its two-hour run time.  With the exception of the climactic fight scene, none of them last more than five minutes.  So in a 115 minute film (not counting credits), you have just MAYBE 20-25 minutes given over to what might be considered the main attraction.  The rest of the film is actually a scrappy father/son drama, arguably ripped off from Over the Top but unarguably superior to that Sly Stallone arm-wrestling picture.  The movie is not wall-to-wall robot action, which does two things.  First of all, it allows the movie to exist as a movie first and a spectacle second, giving time not only to the leads but to supporting characters who get a scene or two of their own (although I wish character-actor God James Reborn had more to do).  It operates primarily as a father/son melodrama that happens to take place in the world of robot-boxing, rather than a film about robot boxing.

Secondly, because the film isn't wall-to-wall robots, it's also not wall-to-wall special effects bleeding out of every corner of the screen.  Other than the fighting machines, the movie pretty much takes place in the real world with real locations and real sets across America.  Thus, of course, since the robot action is limited, the movie can scrape by on a budget that doesn't demand $500 million worldwide before it can be profitable.  In an era when Disney 'compromising' by insisting that Gore Verbinski's The Lone Ranger cost 'just' $200 million, it is behind refreshing to see a seemingly major genre picture that doesn't cost hundreds-of-millions and doesn't really need to.  Real Steel is not a great picture.  It's painfully by-the-book and loses major points for barely even acknowledging the death of the family matriarch, which kick-starts the plot in the first place (it's another example of 'the invisible dead mother').  But it works as a satisfying B-movie that feels like a B-movie in a positive sense.  It only trots out the robots when its required, and the human drama is well-acted enough (Jackman is as good as he usually is) that we care about whether the ending, for human and robot, is a happy one.

By putting story and character first, Shawn Levy made Real Steel both cheaper and arguably better than it otherwise would have been.  And for that, it deserves notice and should be held up as a model for how to make a blockbuster without busting the bank.