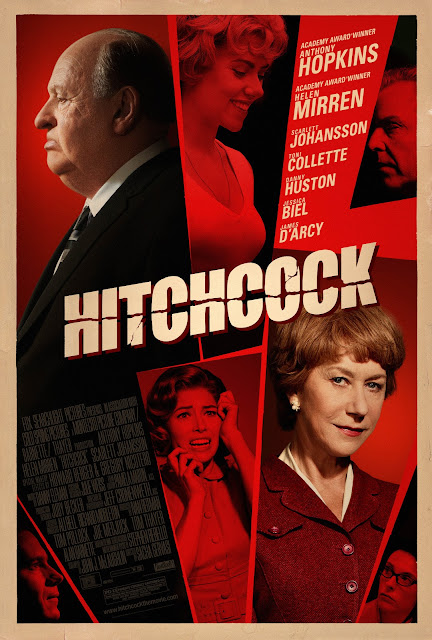 It is telling that the opening frames of Sacha Gervasi's Hitchcock don't even give us the usual 'based on a true story' text as its allegedly non-fiction story begins.  It's the only honest moment of the entire picture, which is so gloriously full of shit that it can't bear to even pretend that the story it's presenting is remotely truthful.  Technically based on Stephen Rebello's 1990 book, Alfred Hitchcock and the Making of Psycho, the film alters history, dilutes the contributions of talented individuals, commits outright libel against others, while basically ignoring its central subject (the, um, making of Psycho) in favor of a contrived would-be romantic conflict between Alfred Hitchcock (Anthony Hopkins) and Alma Reville (Helen Mirren).  Worse yet, the story is told in broad, on-the-nose strokes that resembles the kind of writing found in bad childrens' cartoons and the picture revolves around hindsight-superiority that renders it potently obnoxious.  It plays less as an adult drama and more like a Hitchcock biography blandly written for first-graders.

According to the film, Psycho basically made itself while Hitchcock fretted about whether or not Reville was cheating on him with Whitfield Cook (Danny Houston), who in real life was a friend and trusted collaborator (he helped adapt Strangers On A Train).  Without going into details, Cook's arc qualifies as arguably the worst example of cinematic libel since Cinderella Man turned Max Baer into Clubber Lang.  The film posits the making of a piece of low-budget pulp fiction by the world's most famous director as a 'triumph of the underdog' story while giving us so little detail about the film itself that we are given not a single bit of wisdom as to *why* Psycho connected with audiences on such a massive scale.  The film reduces talented artists like screenwriter Joseph Stefano (Ralph Macchio) and Anthony Perkins himself (James D'Arcy) into punchlines and fodder for cheap jokes all for the sake of making Psycho seem like the singular work of Hitchcock himself at the expense of all the other people who made it possible.  Not that we get much of a look at the genius of Hitchcock himself, since we all-but never see him actually making artistic decisions or actually *directing* (we see no footage of Psycho nor do we even see the Bates motel). We are constantly told what a creative genius Hitchcock is yet we see almost no evidence of this onscreen.

Instead the film posits that Psycho was basically a way for Hitch to explore his own would-be dark side.  This includes a bizarre framing device where Hitchcock has imaginary conversations with serial murderer Ed Gein (played by Michael Wincott).  Gein loosely inspired Robert Bloch's original book, and the film presumes that Hitchcock was fascinated and/or obsessed with Gein on a psychological level.  In truth, Hitchcock knew little of Gein and enjoyed the book purely for its pulpy qualities and the infamous shower murder.  I'm a fan of Wincott and was thrilled to see him snagging a major role again, but the Gein material is both flatly absurd and a waste of time that could have been better spent, I dunno, dealing with the making of Psycho.  The creative arc of the picture is basically how an allegedly terrifying and grotesque book was read by Hitchcock and Hitchcock alone, how a film based on that book was created mostly offscreen, and that said film touched people on a cultural level for reasons left completely unexplained in the film itself.  Hitchcock credits basically the entire success of Psycho to the infamous shower scene (shown here as a way for Hitch to let off personal frustration), which would arguably negate Hitchcock's entire creative genius since said sequence came straight from the original book.

More disconcerting than the absence of any artistic examination is the way it twists its story in order to craft a rather generic and frankly condescending look at the marriage between Hitchcock and Reville.  The potential infidelity between Reville and Cook feels absolutely fabricated even if it may have roots in history.  Worse yet, since we know that no infidelity will occur and we see all too well that Reville deserves an opportunity to stretch her creative wings, the film concludes Cook's arc by making him out to be a villain.  It's a glorious bit of black-and-white condescension, seemingly unwilling to speak at an adult level about unfulfilled artistic ambitions and the need for those standing behind famous people to step out into their own spotlight.  The film surely considers Reville as someone worthy of success, even if we never see her making any artistic choices of note (again, much alleged artistic genius occurs completely off screen .  Yet Reville only achieves a token amount of respect when it is granted to her by her husband and even then only when she has been privately humiliated by someone she trusted which then sends her back onto the proverbial 'right side'.  And for a film rooted in the allegedly inspiring love story between Hitch and Reville, the film's finale teases what amounts to the next great struggle in their relationship, one that negates the film's pandering conclusion that Hitchcock's obsessions with his blond bombshells was annoying but ultimately harmless.

While there is fun in watching a number of famous people play dress up, John J. McLaughlin's screenplay is basically pitched to young children.  Oh sure it's about grown ups and technically deals in grown-up subject matter (adultery, sexual frustration, murder, etc.), but the dialogue is written on a level of a bad 1980s Saturday morning cartoon.  Names of famous actors of the day and Hitchcock's prior films are dropped at random so as to make the film feel more inside baseball than it actually is.  Anthony Perkins's homosexuality is basically played for laughs.  The entire romantic plot unfolds in a G-rated fashion that doesn't dare offend the audience or offer any remotely challenging ideas (like perhaps Reville was entitled to her professional flirtation at least as much as Hitchcock was 'entitled' to flirt with his actresses).  Since so little is *shown*, all of the film's themes and arcs are expressed in hilariously on-the-nose dialogue that spells out even what is obvious to the viewer (At the climax, Mirren literally utters "This could be the greatest success of your career!").  The whole film feels pandering, telling a story of arguably very smart people and making it palatable for very stupid people.

The film's dumbing down extends to its treatment of pretty much every other character in the narrative, who all fail to see the inherent brilliance of Psycho and fail to see its financial and artistic potential.  Toni Collette plays Peggy Robertson, in reality the woman who brought the book to Hitchcock's attention, as doubtful of the project and comically disturbed by the subject matter (because of course girls can't handle icky stuff, right?).  The various bosses at Paramount (represented by Richard Portnow) and the censorship board (represented by Kurtwood Smith) are viewed as foolishly doubting toms, and the film invites us to laugh at their wrongheadedness and take pleasure in our hindsight brilliance.  The entire enterprise feels like that early moment in Titanic when we are supposed to mock Billy Zane because he didn't have the foresight to presume Picasso's eventual status as a famous artist. Yet since we see no more of the Master of Suspense's creative process than Portnow and Smith, we frankly have no reason to question their reservations save for the fact that we know the broad outline of how Psycho was eventually received.  Unfortunately, 'broad outline' is all we get here.  Only Michael Stuhlbarg, as Hitch's agent, comes off as somewhat human (he knows the project is a risk, but he knows a happy Hitchcock is better in the long run than a bored and miserable one).

In the end, Hitchcock is two things that I rather despise: It pointlessly rewrites history to give us conformist, pandering character arcs for the sake of 'playing to the masses' even as the truth is far more entertaining than this bland fiction.  It also takes what should be an adult film and plays it to the level of young children, with on-the-nose dialogue, black-and-white morality, simplistic themes and concepts, and a refusal to treat its audience like thinking grown ups.  It does a disservice to Alfred Hitchcock himself and especially to those whose contributions made Psycho into the cultural touchstone than it is.  By basically telling a blandly fictionalized version of non-fiction characters, one that holds up Hitchcock's genius to the point of libeling all others, while showing almost no evidence of that genius, it insults the Master of Suspense and all those around him.  By refusing to simply pitch its story to at least audiences old enough to drive a car or vote, it insults discerning moviegoers everywhere.

It wasn't intended to be a documentary. It was intended to intertwine various elements of Hitchcock's background & relationship with his wife that led to the making of Psycho. I thought that the movie did this well.