A rediscovered joy: Why Twilight Saga: Breaking Dawn part 2 was one of the best movie-going experiences in years... 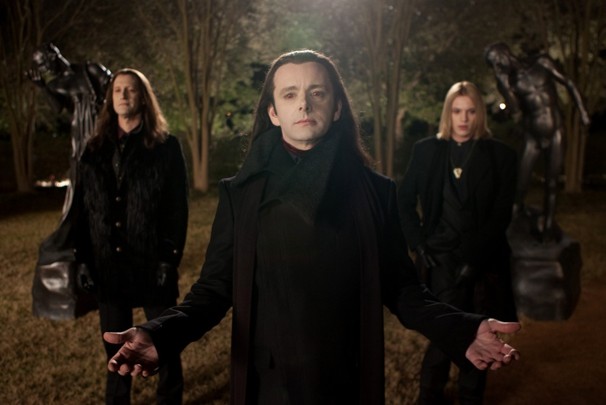 It's probably my favorite movie-going moment of 2012. There is a scene towards the end of the final Twilight Saga picture (vague spoilers...) where two sets of enemies meet on a snow covered hill, both prepared to do battle if necessary. At one point, one of those on the side of the Cullens charges towards the head of the evil Volturi clan (Michael Sheen) as the fiendish leader stands his ground. Without going into spoiler details, the two foes meet and briefly skirmish in mid-air, before both sides crash to the ground. One of them stands tall and smirks as we realize that (highlight to reveal) Aro is holding the detached head of a major character in his hands. At which point, the audience absolutely exploded with horror and tittering shock, blowing the walls off the auditorium with a deafening shriek and following it with nervous giggling (this was *not* how it happened in the book and the audience now knew all bets were off). At which point, I smiled even wider, impressed both by the apparent chutzpah on display and the audience's reaction, and said to myself "This* is why I go to the movies!".

I didn't realize it at the time, but I haven't been to an advance-night or midnight screening of a major movie like this in well over five years.  Sure I caught a Tuesday at-7pm showing of The Girl With the Dragon Tattoo last year, but that's not the kind of movie that merits something akin to glorious audience participation (and it wasn't exactly crowded).  Since my daughter was born, I've relegated myself to either press screenings, mid-day matinees, or late-evening showings.  Yes seeing a film in advance of its opening is still enjoyable, but even the most excited press screening simply cannot compare to the thick excitement that comes with being in a packed audience with the first group of paying moviegoers to sample the next chapter of their favorite franchise.  I've talked a lot about the thrill of the midnight showing, more-so after the Colorado theater shooting back in July, but I didn't realize how much I missed this kind of audience for this kind of movie.  Say what you will about Breaking Dawn part 2 itself, but the audience ensured that I was having a blast even when the movie was somewhat dragging.  Even the trailers got boisterous reactions, as there was rapturous applause for Les Miserables and a thunderous roar of approval for the blink-and-you-miss it teaser for The Hunger Games: Chasing Fire.

But the real fun began when the feature presentation began.  Right from the get-go, the credits offered a roll-call of the cast which allowed audiences to applaud their favorites (I cheered loudly for Billy Burke, because someone had to).  Every joke hit (especially Michael Sheen's insane giggle), every action beat got the appropriate approval, and every narrative misstep got the correct response (if you've seen the movie you know when the theater erupted in boos).  It was the closest thing one can get an actual Rocky Horror Picture Show experience in a normal cinematic engagement.  Heck I'd argue it's better than that since the audience participation isn't rigorously rehearsed and choreographed.  The sheer amount of cackles and sometimes snarky laughter certainly offers evidence to the idea that even the die-hard Twi-hards don't take this stuff as religious gospel (let's just say the audience knew it was being pandered to when Lautner stripped down to his underwear).  By the time the film ended with yet another role call, this time for every single actor who had appeared in any of the five films (I cheered for Graham Greene and Christian Serratos, because someone had to), I realized that I was even more excited for my kids (either one) to grow old enough to participate in this kind of moviegoing.  I see films in a theater all of the time, but this was truly 'going to the movies' in its purest form.

Obviously not every film befits this kind of environment.  Killing Them Softly or Lincoln, for example, was seen exactly as they should be seen, in a darkened theater with other serious film goers.  And an overzealous reaction can sometimes harm a film, as I'm quite glad I didn't see the somber and deeply cynical Rambo in an audience of young men hooting and hollering at the climactic bloodshed, ignorant of the fact that we weren't supposed to be cheering the slaughter.  And not every film is going to have a jam-packed advance-night screening even if said earlier showtime is offered.  I've had my share of near-empty midnight or advance-night showings in my youth, which obviously kills much of the fun. But for films that can be classified as 'fan-bait', there is no better way to see them than with a room full of excited and energized fans.  And there are few franchises that had a more energized fan base than The Twilight Saga.  I cannot completely recommend Breaking Dawn 2 to those who aren't already fans of the franchise.  But I can absolutely give a rave review to that Thursday night-at 10pm audience.

For providing me with a superb taste of a specific kind of movie going  I thank ye Twilight Saga audience.  The Twilight Saga: Breaking Dawn part 2 was the most fun I've had at the movies all year...

All the things you said about the reactions of the twi-hards during the movie, were all the same here in Asia..... like, "That's not in the book" and the "audience absolutely exploded with horror and tittering shock, blowing the walls off the auditorium with a deafening shriek and following it with nervous giggling" :)