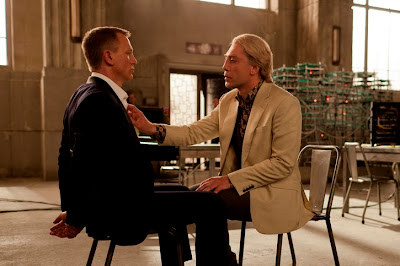 If you're among the lucky ones who have a nearby IMAX theater, today is the opening day for Skyfall.  As such, here is the official place for readers who want to gab about the film, spoilers-and-all, to their heart's content.  I may have a spoiler piece on Monday or Tuesday while I'm hoping Brandon Peters gets a chance to see the film this week and deliver a review, but that's depending on his schedule.  But for the meantime, have at it below, folks.  If you've seen it, what did you think?  Did it live up to the hype?  Did it work for you as well if not better than it worked for me?  While you're hopefully gabbing below, check out this well-written piece that serves as somewhat of a rebuttal to my review.  I'm actually going to probably see the film again a week from Friday, as my wife couldn't make the press screening (making it the first film since Indiana Jones and the Kingdom of the Crystal Skull that I've seen twice in a theater).  But I'm rambling and it's your turn to ramble.  I'm off to write my Lincoln review for tomorrow.

I keep forgetting it hasn't even come out in the States yet. I will miss Judi Dench from now on :(. But I think Ralph Fiennes will make a great M. Some friends have said they thought the 2nd half dragged on a bit, but personally I thought the whole Scottish bit was an amazing tribute to the previous Bond's especially on the 50th anniversary. Loved it.

Scott, you're review is pretty spot on about Skyfall, even if I did greatly enjoy the film. Essentially, they took three out of the four Brosnan films, put it in a bowl, mixed A LOT of Christopher Nolan herbs and spices, and Skyfall came out of the oven.

Even with all of that, I do like the fact that this is the third and final piece to the "Bond Begins" arc they've been building. This is why the final scene between Bond, Moneypenny, and the new M feels completely earned. He and the franchise are fully Bond.

Still, can't argue with the criticism that the film feels like a repeat of other films in the franchise but considering the writers of this film wrote all of Brosnan's films, I can kind of see how that would happen.

I'm willing to bet the producers saw the same thing and that's the reason John Logan is writing the next two by himself.

I wish that the death of Severine had more of an impact on Bond - his line about it being a waste of good scotch felt offensive, considering the role that he had played in her demise.

I FINALLY saw Skyfall ... been seeing Bond movies in the theater for 25 years now ... where did the time go?

And while I thoroughly enjoyed the winks to the past ("Oh go ahead eject me, see if I care?") I also felt a bit of deja vu with "Die Another Day"'s homages on what was then Bond's 40th Anniversary.


And maybe Scott or Brandon can correct me if I'm wrong - but I feel this is the first Bond film to feature significant and multiple action pieces in and around London. Past films have had one set piece (Brosnan's boat chase on the Thames, for instance) but the action then shifted elsewhere. Maybe I'm wrong - but it felt as if London played a much larger role in this film than prior entries. Too bad the Queen didn't want to make a cameo in this film, as she did with the Olympics. :)

The first Bond films I saw in the theater were Dalton's two entries (I was 12 and 14 at the time), and I was excited to the point of satisfaction with "Goldeneye". Following each of Brosnan's next entries I always felt a bit let down. I remembering muttering to myself following "Tomorrow Never Dies", "Well, hopefully it makes a lot of money so they'll make another one in a couple of years."

Following "Casino Royale" and yes, "Quantum of Solace" I felt satisfied and thrilled. They were James Bond movies that got my heart racing, added depth to the character in small ways, and paid respect to me as a lifelong fan of James Bond.

It's all the emotion I felt today at the conclusion of "Skyfall".

And while I agree with Scott's review, and with the Nolan-esque moments (I too thought "Joker" about the villainn, and I thought "this tunnel is to Jame's as the well is to Bruce"), this movie had enough magic to still make me feel like a kid seeing Oddjob fling his hat and take of the head of the statue.