Review: Johnny English Reborn (2011) is mostly uninspired, but it's painless and harmless with at least one great scene. 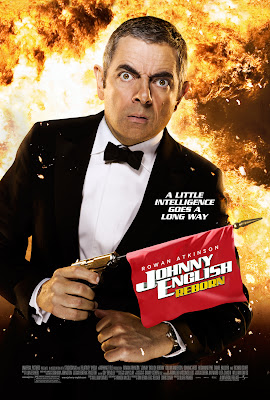 It's obviously a bit of a left-handed compliment to refer to a film as 'not torture' or 'relatively watchable', but sometimes there are no better adjectives.  Johnny English Reborn is a slight film, a generally by-the-numbers spy spoof greenlit primarily because the first film grossed $160 million worldwide back in 2003 (most of that from overseas markets).  The first Johnny English was notable mostly for John Malkovich hamming it up as the villain, in a performance that contained an atrociously funny French accent and a nugget of trivia for those who've seen Being John Malkovich (hint - his character steals the Crown Jewels).  Revisiting it, it is remarkable how much its narrative (bumbling paper-pusher gets to be a real agent when the other secret operatives are massacred offscreen) was stolen for the Steve Carrell/Anne Hathaway Get Smart adaptation five years later.  So, nine years later, we now have Johnny English Reborn.

While it is not what anyone would call 'a good movie', it has a humble charm and a light and unpretentious air about it.  As spy spoofs go, it's not as ambitious but far less insufferable than either of the Austin Powers sequels, but lacks the cleverness of Undercover Brother.  Rowan Atkinson is the whole show here, and while he is game and occasionally funny, the film desperately needs a couple more comedic players.  Gillian Anderson is sadly given nothing to do as MI-7 leader Pegasus, while 31-year old Rosamund Pike (who was actually a Bond villain in Die Another Day back in 2002) is tasked with playing the love interest to 56-year old Atkinson.  No one, not the two female leads nor Dominic West as the revered Ambrose nor even English's young sidekick played by Daniel Kaluuya gets any real comic opportunities.  Even poor Richard Schiff makes a blink-and-you-miss it cameo in a role pretty identical to the one he played on Burn Notice a few years back.  Pik Sen Lim scores a few chuckles purely by playing a ruthless assassin with expected aplomb.  As noted, the first film has the hamming efforts of Mr. Malkovich, and this film desperately needs a villain of equal stature or presence.

Since it is purely a vehicle for Atkinson, it is somewhat revealing that he still knows how to deliver his shtick.  The former Mr. Bean is now 56 years old, but rather than ignore this factoid (what is mandatory retirement age at the real MI-5 anyway?), the film openly acknowledges it in the film's one great sequence.  The film's first major set piece is a gloriously clever foot chase involving Johnny English tracking down a murderous operative. Without going into details, the bad guy uses every action cliche in the book to evade capture while Johnny barely breaks a sweat.  It's a genuinely inventive and witty scene, and it surely makes the film worth a sample when it arrives on DVD or Netflix Streaming.  Still, aside from that great gag set and a handful of amusing bits (one of which involving a seemingly doomed cat), the film alternates between running on fumes and recycling jokes that the first film stole from The Naked Gun 2 1/2 in the first place.

As noted above, Johnny English Reborn is a not an ugly or evil film.  It is rated PG and is perfectly appropriate for younger audiences while giving them enough danger and violence to create actual suspense.  There are surely better films of this ilk (the Peter Sellers Pink Panther films for starters), but it's also rarely boring and just amusing enough to merit a viewing if one is so inclined.  As it stands, it earns most of its points for its general inoffensiveness and its occasionally winning moments of physical comedy.  But one can only imagine how much more this film (or this series really) could have been if Atkinson wasn't the only thing worth watching.