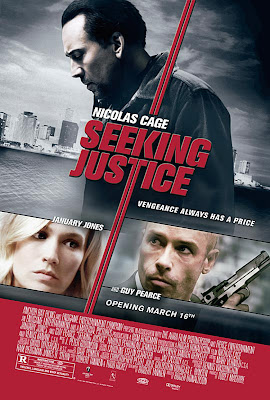 The strangest thing about Nicolas Cage's Seeking Justice is how painfully old-fashioned it feels.  It is a B-movie through-and-through, yet it resembles the sort of thing that arguably would have been an A-picture just 10 years ago.  It has someone who is technically a major movie star, an up-and-coming television star as the token love interest, a prestigious 'slumming' thespian as the villain who indeed gives more credibility to the picture than it deserves, and it has just enough character actors filling in the gaps to keep us almost entertained.  Moreover, even its plot and moral philosophy feels out-of-step with today's pressing issues.  Seeking Justice literally feels like a movie that was shot and edited in 1995 and magically sent into the future for our enjoyment today.  Of course, how much enjoyment you will might get from a creaky old relic is open to debate, but it if Hobo With a Shotgun was a homage-via-recreation of 1970s grindhouse, then Seeking Justice does the same trick for the 1990s crime thriller.

The plot, simply enough, concerns buttoned-down and aggressively 'normal' Nicolas Cage as a teacher whose wife (January Jones) suffers a violent sexual assault.  Obviously grief-stricken, he is all-too susceptible to the offer of a mysterious man (Guy Pearce) with a simple offer.  'We know who did this and we can kill him for you, but you'll owe us a favor later.'  Two candy bars out of the vending machine later, the deal is made and one rapist gets a bullet in the face.  Sometime later, Pearce returns with a demand that Cage make good on his offer of assistance.  See, Guy Pearce belongs to an organization that operates as sort of a Pay It Forward for murderous vigilantes.  They whacked the guy who raped Cage's wife, so now he has to kill some other would-be criminal scum.  He initially refuses of course, but instead of saying 'Okay fine, just don't tell anyone about us', they make various implied threats against him and his oblivious (of course) wife.  Violence, peril, light action, and shocking discoveries technically ensue.

The film is helmed by Roger Donaldson (who has directed far better thrillers like No Way Out and The Bank Job), so there is a certainly old-school competence and professionalism, and the film indeed plays like a polished studio production that perhaps was intended to be a mainstream theatrical release at some point.  What's odd isn't the film's route formula or pointed predictably, but rather the low-key nature of its thrills and chills.  Again, in the 1990s the mere presence of major stunts and periodic gun fights would have been enough for a 'thriller'.  But the 'all-spectacle all-the-time' era has rendered this sort of genre exercise almost quaint.  I'm not saying this would be a 'good' movie in its day.  Cage is so dead-set on being 'just a regular guy' that he's both boring and annoying, while January Jones has nothing to do other than be imperiled and look stupidly hot.  The would-be twists are painfully obvious much of the film's middle hour consists of Cage randomly looking for evidence that will eventually mostly drop into his lap.

Still, what's most 'charming' about the film is the fact that it still exists in the early-90s era where street crime was the top fear of most citizens. Back then, you could get away with speeches about the city being filled with scum preying on the innocent and someone having to do what the cops won't and etc, etc, etc.  In today's climate, I'd imagine that more people are less worried about being mugged than they are about being in an economic situation where they contemplate mugging someone.  Even the Nolan Batman films deal with crime not as an abstract situation of hardened criminals targeting the innocent but rather a symptom of systematic high-level corruption and economic inequality.  I'm not sure its appropriate to say that the film evokes nostalgia for being afraid of random violence, but the picture's societal attitudes are far more in line with the likes of An Eye For An Eye than the more realistic vigilante film like Death Sentence (where taking the law into your own hands can have some really awful consequences).

Seeking Justice promises exactly what its poster and trailer promises, no more and perhaps only a little bit less (I was hoping for a few more twists outside of the norm).  It hearkens back to an earlier, happier time, when movie stars and a dash of violent thrills were enough to be considered a major film.  It takes us back to a bygone era when we were more afraid of being shot by a random bank robber than being robbed by the bank itself.