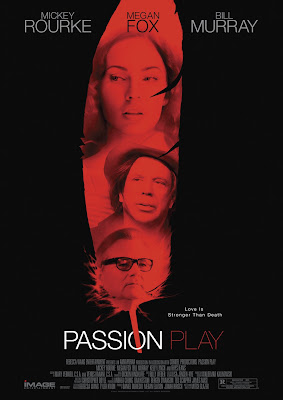 Passion Play is a film that asks you to watch its lead character make one terrible decision after another and sympathize with him anyway. From the first frame of the film until the last, Nate (Mickey Rourke) exhibits atrocious judgment and a painful selfish streak, yet we are supposed to be on his side for the entirety of the picture. The opening scene of the picture has him about to be shot dead in a desert for sleeping with the wife of a known mob boss. As Passion Play unfolds, one can't help but wonder if everyone involved would have been better off if Nate had just taken two in the head.

A token amount of plot: Having miraculously escaped a gangland execution, former jazz great Nate has found temporary refuge in a rundown carnival. He almost immediately takes a fancy to the mysterious Lily (Megan Fox), a young orphan girl who can inexplicably sprout wings. Lily sees Nate as her chance to escape the cruel fate of being ogled from within a small box, while Nate sees Lily as his chance to buy his life from the vicious Happy Shannon (Bill Murray). But as Lily and Nate grow closer, Nate wonders if he can actually go through with his selfish betrayal, but what will be the cost if he does not?

First of all, Megan Fox will be turning 25 in about ten days. Mickey Rourke will be 59 years old in September. That's a 34-year age difference between our alleged romantic leads. And I don't know if you've noticed this, but Mickey Rourke isn't exactly a pinnacle of physical attractiveness at this point. Hell, Megan Fox was born the very year Rourke hit the prime of his sex symbol status in 9 1/2 Weeks. The idea even a lost soul such as Lily would fall for the beaten-down, self-destructive, and not-particularly charming guy like Nate stretches the realm of plausibility.

That he, quite frankly, looks like he should be doing battle with Dick Tracy is the final straw of breaking the suspension of disbelief. I know May/December romances are a cliche in filmdom, but there is usually some parity in the attractiveness of the respective couple. Jim Carrey may be 20 years old than Zooey Deschanel in Yes Men, but Carrey still looks like he's in his mid-30s and Deschanel doesn't exactly look like a teenager. But Megan Fox looks just as young as she did playing a high school student in the first Transformers picture, and Mickey Rourke looks just as rundown as he did in The Wrestler.

Even if you could buy the absurd physical mismatch of the pairing in question, the film still collapses under the weight of Nate's terrible decision making skills. For much of the second act, we know full well that he's planning to betray Lily to Happy Shannon, yet we are supposed to be invested in their budding romance. Once the cards are laid on the table, we're supposed to feel sorry for poor Nate when Lily makes her choice, especially knowing that she only made that choice to save Nate's skin. The entire third act of the film involves Nate basically pleading with Lily to take him back while she (justifiably) tells him to get lost. This is one of those films where the allegedly happy ending doesn't really feel all that happy, when you consider the longterm consequences.

Unfortunately, the film isn't even terribly effective as an acting treat. Rourke stumbles and mumbles his way through this lead role, bringing no more charisma or star power than he did in his glorified cameos in The Expendables or Iron Man 2. Regardless of his prior worth as a leading man in the 1980s, it appears that Rourke is simply a victim of the happy accident that is The Wrestler, a star vehicle so tailor-made for him that all he had to do was show up for work and hit his marks. Megan Fox is an interesting casting choice for a young woman doomed to have people ogle her as her only source of income, since that seems to be the actress's dilemma at the moment.

Still, while she is animated and expressive throughout (she sells the long patches of silent emotion), her verbal performance leaves much to be desired. Of course, writer/director Mitch Glazer very nearly fumbles a Bill Murray performance, so this may be yet another case of Fox being hamstrung by a filmmaker whose flat, plodding direction brings the film down on everyones' head (re - Jennifer's Body). Bill Murray steals the picture by default, and his knowing, painfully honest and cool-headed gangster stands out in a world of laughably idealistic buffoons. Kelly Lynch (the director's wife) and Rhys Ifans briefly appear, and Bud Court is wasted in a mere cameo.

With a painfully absurd story, an obnoxiously unsympathetic lead character, and a hilariously unlikely romance that is supposed to capture our hearts, Passion Play is a genuinely bad picture. There really isn't that much more to say about it, but it just doesn't work. For those who care, you do see plenty of breasts in this picture. Unfortunately, it's Mickey Rourke who goes topless.