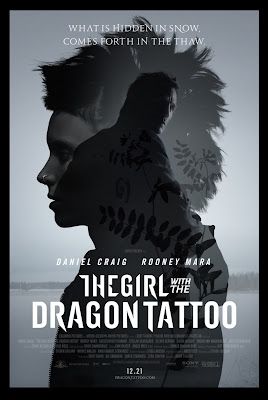 The Girl With the Dragon Tattoo feels like a James Patterson novel drained of all color and pulpiness while given a somber air of alleged gravity and importance.  That is not entirely an insult, as I enjoy trashy crime fiction and the kind of thrillers Paramount used to put out with regularity in the late 1990s.  So if I tell you that this film plays like a drawn-out, overly pretentious, and ice-cold extended episode of Criminal Minds, that's not quite the insult you might make it out to be.  I rather enjoy Criminal Minds and its James Patterson meets Justice League construction.  But how I wish that this film, which is less suspenseful and (by virtue of its toned down violence) less sensational then the Swedish original, embraced its pulpy roots just a bit more.  Come what may, if I may paraphrase Ty Burr, asking David Fincher to direct this material is like asking Picasso to paint a fence.  What it earns in earnestness, it loses in pure entertainment value and outright quality.

For much of the running time, it is a rather dull thriller in which a relatively dull reporter (Daniel Craig) attempts to solve a mystery with absolutely no urgency.  The would-be investigation mostly comprises of Mr. Craig (admittedly more charming than usual due to not having to play a pure alpha male) conducting painfully dry interviews with generally uninteresting people which generally yield no real information and provide little insight into the cast of characters.  And, without going into details, the major reveal is made painfully obvious pretty much right from the get-go (and a second major reveal is strongly hinted at pretty early on), which makes the majority of the first 2/3 into a bit of a chore when the focus is on cracking the case.  As for the 'breakout character', Lisbeth Salander (Rooney Mara) is barely in the film for the first half, and her scenes are so disconnected from the main narrative that her arc feels like a separate (and arguably superior) film altogether.  Yes, Salander and Craig's Blomkvist eventually do cross paths, and the movie is better for it when they do, but the first half of the picture is basically a very boring and conventional mystery occasionally interrupted by a far more interesting character study.

As for the title character, if the film is worth seeing, it is worth seeing for Mara's fantastic performance.  Purists may carp, but I actually preferred her more introverted and somewhat vulnerable take on Salander to Rapace's perfectly fine, but comparatively stoic turn.  Whether or not Salander is indeed the empowering feminist icon that she has been made out to be is something I will leave to a later essay, and how much my preference is due to the fact that I was attracted to Rooney in a way I wasn't to Rapace is something I'll possibly examine on another day.  But in a purely objective sense, Mara's Salander is a scarred, damaged young woman who is slowly working her way through various (unspoken in this film) childhood traumas that have left her as a willing figure of isolation.  It's a wonderfully physical and often subtle turn, with the eyes doing much of the work.  Like Michelle Pfeiffer's turn as Selina Kyle in Batman Returns, Salander is not so much a hardcore bad-ass so much as a hurt soul who uses outward toughness as a defense mechanism.  And, to the film's credit, the picture never tries to sell the idea that ALL victims of the kind of abuse that Lisbeth suffered end up coping in as Lisbeth did.  Despite my distaste for the Swedish film sequels, their respective emphasis on Salander make their theoretical US adaptations more appealing, as I do want to see more of this variation on Lisbeth Salander.

But aside from the colorful supporting character who occasionally takes the spotlight, what we have is a relatively rudimentary thriller that fails to thrill or really excite for most of its running time (there is a fine and chilling sequence in the third act, but describing it would be a spoiler so you'll have to take my word for it).  Even the source material's infamously sensationalized violence is mostly toned down, which leaves the viewer in the uncomfortable position of thinking "Gee, that rape scene wasn't THAT graphic and hard to watch!".  Oddly enough, while the second sexual assault scene is every bit as dramatic and discomforting as it should be (although its explicitness is no worse than something like The General's Daughter), it is a later retribution moment that will actually have audiences squirming due to the use of sound effects.  But again, these sequences occur in the first half of the film and they are largely disconnected from the main narrative in a fashion that makes them feel borderline exploitative.

If this were the first film to ever delve into misogynistic sex crimes, the ability for the uber-rich to act out their darkest sexual fantasies, and/or the coping mechanisms of victims of childhood sexual trauma, then the film would perhaps justify its air of pretentiousness.  But it is just one of countless movies, to say nothing of thousands of television episodes to deal with these subjects, often in a more entertaining fashion.  Judged purely as a genre exercise, The Girl With the Dragon Tattoo is a mediocre thriller that fails to even achieve the token suspense generated by its Swedish predecessor.  Shorn of most of its extreme violence, it lacks even that bit of noteworthiness that prestigious ilk.

Aside from the technical proficiency on display (it sure is a gorgeous looking fence...), only Rooney Mara's terrific turn as Lisbeth Salander merits recommendation.  While I would argue against the idea that her character represents any kind of pioneering feminist icon, it is not the Lisbeth's (or Mara's) fault that the compelling and engaging supporting character has been lionized to such a degree.  She is terrific and her character provides most of what little entertainment value the film has to offer.  The rest of the package is sadly lacking, with a core mystery that is both painfully easy to solve and relatively unengaging to follow along.  It is a thriller without thrills, a mystery with few tangible clues, and a drama with too few characters who earn our engagement.  The girl with the dragon tattoo is wonderful.  The Girl With the Dragon Tattoo is not.

I guess I have to disagree with your critique about it being bad that the character arcs don't interact during the first third of the movie. That's really how the book plays out as well. The first third (maybe half) is introducing us to Bloomkvist as, really the main character, then giving us glimpses and teases of Salander. And, ultimately, showing us why she is the way she is and why she is the more interesting of the two.

I understand that movies don't need to (and usually don't) follow the books, but I like that this one did, or attempted too. I think keeping them separate for a good portion of the movie lets us realize the personalities and histories of the characters in a more personal and revealing way.

I do completely agree that the violence was toned down from what I expected it to be and think it did the film, book, and Salander's character an injustice.

Either way, I always appreciate your reviews and essays, please keep them coming.

"That's really how the book plays out as well."

But the book is also awful.