David Denby damn-well should have honored his agreement, but his excuse is 100% accurate and should start a conversation about 'awards-bait' scheduling. 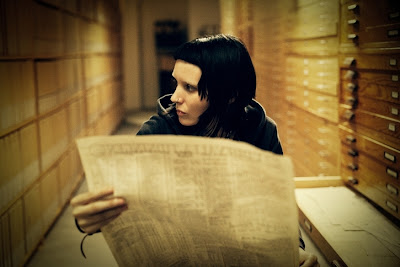 As most of you know, the blogosphere caught on fire yesterday when it was reported that David Denby, film critic for The New Yorker, would be running a review of Sony's The Girl With the Dragon Tattoo in today's issue of the magazine, which would publish eight days ahead of the official December 13th embargo.  Long story short, the New York Film Critics Circle were shown the film early and ahead of everyone else after they arbitrarily decided to move up their voting dates for their annual awards, mostly in order to be FIRST in the parade of year-end awards.  Despite promising to respect the embargo, Denby has gone ahead and published the first review.  I won't link to it, but (slight digression) I will say that it's almost as short as this paragraph and he might-as-well have been reviewing the eight-minute trailer.  Sony executive Scott Rudin directly confronted Mr. Denby, which started a back-and-forth email thread which climaxed with Denby being banned from future Sony screenings for the immediate (?) future.  Good.

Even if he disagreed with the NYFCC decision to move up their voting, he still reaped the benefits of seeing the anticipated David Fincher remake ahead of everyone else, and said screening was precipitated on an agreement about when the review could and could not run.  But, it is worth pointing out that Denby is absolutely right when it comes to his 'excuse'.  In his first email reply to Scott Rudin (found at The Playlist), Denby states "The system is destructive: Grown-ups are ignored for much of the year, cast out like downsized workers, and then given eight good movies all at once in the last five weeks of the year."  And of course, if you read my somewhat whiny rant about prestige pictures a couple weeks ago, you know I too find this to be a huge problem.  Imagine what a wonderful year for movies it would be, what every year would be, if the studios actually spread out their 'year-end Oscar bait'.  Imagine enjoying The Girl With the Dragon Tattoo in the same President's Day slot where The Silence of the Lambs flourished back in 1991.  Imagine viewing Extremely Loud and Incredibly Close in the same mid-summer period where Tom Hanks shined with Forrest Gump, Saving Private Ryan, and The Road to Perdition.  The theoretical sadness over yet-another year gone by without a new James Bond film would be a bit less sad if we could have enjoyed Tinker, Tailor, Soldier, Spy (ie - a 'real' espionage film) in the pre-Thanksgiving slot where it was originally slated to open, and where many a James Bond film has debuted since 1995.  Imagine a year where the two-dozen allegedly terrific films that are held back until the end of year were actually dispersed at a rate of two-to-four a month, rather than all jammed into the last six weeks of the year.

I get that the Academy allegedly has a short attention span.  And I get that the first two months of the new year often exist as a cinematic dead zone which allows the year-end 'best-of' pictures to flourish in wide release.  But it is frankly the studios' job, which is made ever easier with DVD screeners and various streaming outlets, to remind the critics and the various awards groups about the great films that came out prior to October or November.  Imagine if something that once seemed a shoe-in for Oscar love (Take Shelter) is now considered a long-shot primarily because it came out way back in September.  The problem with the industry isn't that 'movies stink!'.  Heck, this year was surprisingly solid thanks to the uncommonly high quality of the various popcorn entertainments (Rango, Kung Fu Panda 2, Bridesmaids, Captain America, The Muppets, etc).  The problem is that the studios hold all of their allegedly quality product until the last possible minute, making the rest of the year feel like a barren dessert and the actual task of seeing the year's great films feel like a chore, a marathon session of screenings and screenings that threaten to bleed the fun and excitement out of seeing the sort of product that theoretically ennobles moviemaking.

I disagree with what David Denby did, and the message it sends about arbitrary rule-breaking.  I worry that, as is often the case, studios will respond to infractions from a major publication by lashing out at the blogs and the online critics.  David Denby and his colleagues recieved special treatment based on an agreement, which in turn was based on a childish decision ("We want to vote FIRST so we have to see your movie NOW!"), which was then arbitrarily violated on a whim.  But, the reason he cited for his infraction, while not justifying the offense, should lead to a conversation about how studios schedule their allegedly superior product.  I'd rather be able to sample the best films of the year on a year-in/year-out basis, rather than just right before the year is on the way out.  I'm sure I'm not alone on that one.