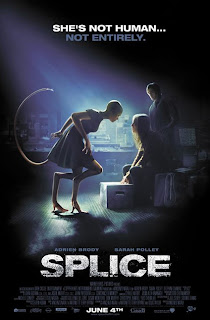 In a sea of pretenders, Splice is the real thing. It is a genuine thriller, rooted in a small cast of developed characters and thoroughly engaged in its moral quagmire. It is frighteningly plausible and deliciously humorous. It is less concerned with scaring you out of your seat than in slowly creeping you out. It is a true original, a buttoned-down variation of the classic 'science has gone too far' story, but rooted in realism and sympathetic characters. It works because it takes the time to make us give a damn, and we give a damn because it works.

A token amount of plot - Scientists Clive Nicoli and Elsa Kast (Adrien Brody and Sarah Polley) have just made a genuine genetic breakthrough, basically splicing genes together to make a completely original life-form. Alas, the corporate heads would rather see a practical and profitable use for the protein that made this work possible, so further research is officially put on hold. But Dr. Kast decides to try one last (unauthorized) genetic experiment, this time with a touch of human DNA. What they get is a human/animal hybrid that looks and acts far more human than anything ever created in a laboratory. Dr. Nicoli wants to kill the creation before the illegal experiment is discovered, but Elsa has allowed to the creature to play on her maternal instincts. After all, the creation is aging faster than any normal human, so it would theoretically die naturally in a brief period of time. What's the worst that can go wrong?

The film is quite small-scale and uncommonly intimate, doing much with just several speaking parts and a few key settings. If not for a token amount of special effects work, the film could easily be a stage play. But what the picture lacks in spectacle, it makes up for with the basics - smart writing and terrific acting. Sarah Polley again brings a dignity and credibility to a genre picture, as she did in the superior Dawn of the Dead remake back in 2004 (she generally sticks to art-house cinema, when she's not directing masterpieces such as Away From Her). Adrien Brody shines as the occasionally character-ish actor relishes playing a relatively reasonable and level-headed man of science. Everyone in this film is intelligent, and much of the tension comes from the fact that, after the 'point of no return', they basically do what any reasonable person would do in reaction to the circumstances in question. Abigail Chu and Delphine Chanéac portray the proverbial 'test-tube baby' Dern at various stages of her life.

As with a top-notch Stephen King novel, the slow-building horror of Splice comes not from shock and surprise, but by the dawning realization that we pretty-much know where the story is headed but are powerless to avert the outcome. Every character is sympathetic, and the parent-child relationship that is formed between the two scientists and their creation quickly reaches disturbing heights of authenticity. The parables are there (the question of when and how life begins, the struggles of raising a developmentally-challenging child, etc), and the film takes these ideas every bit as seriously as the science and the horror elements.

Splice is a completely absorbing, occasionally moving, and uncommonly engaging horror drama. It is a sharply-observed portrait, and it puts the basics of quality storytelling ahead of razzle-dazzle (there is a bare-minimum of special effects and violence). It's also quirky and smart, and it takes its morality and science as seriously as it takes its chills. And, as a bonus, it contains one scene around halfway in that is the single-biggest (intentional) laugh-out-loud moment I've had at the movies in a long time. In a genre beset by remakes and rip-offs, Splice is a genuinely original horror picture. In a summer beset by underwhelming mega-movies and downright-terrible tent-pole epics, Splice delivers the small-scale goods with style and grace. In an insanely mediocre summer movie season, Splice is the sanest choice.

Looks pretty cool and Vincenzo Natali's Cube is one of my favorites so I'll be sure to check this out.

Alas, you won't have to buy tickets in advance. It made only $7 million this weekend.