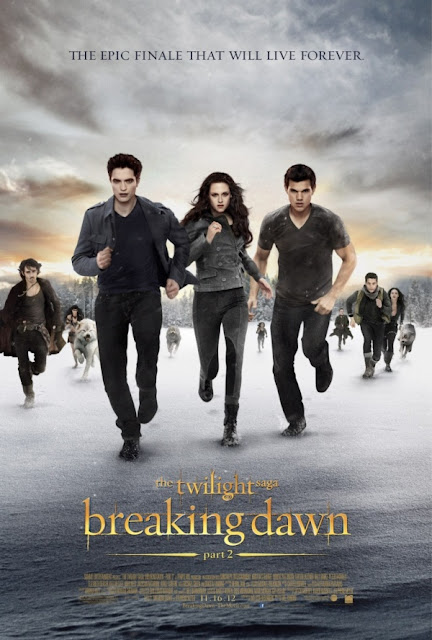 As a would-be series finale, the biggest problem with Breaking Dawn part 2 is that  it really doesn't feel like the end of anything, nor does it feel like a natural stopping point.  This is not a finale in the vein of Harry Potter and the Deathly Hallows part II, where the series-long conflict is brought to a definitive end and the characters end in places from which they can not go back.  Nor is it akin to Back to the Future III, which attempts to bring its narrative full-circle and finish the specific story that it has been telling while leaving the door open for more adventures down the line.  The Twilight Saga: Breaking Dawn part 2 basically plays like just another chapter in the lives of its main characters, one that qualifies as the end purely because the author of the original novels, Stephenie Myer, decided to stop.  The story does continue the adventures of Bella, Jacob, and the Cullen vampire clan, offering a completely new conflict at the end of its first act purely to actually have a conflict at all.  Obviously this is a source material problem, but don't expect the 'this is the end!' goosebumps that you got during the opening reels of Return of the King.  As merely a Twilight film, it's not half-bad.  If only by default, it's the best Twilight sequel and comes the closest to the irreverent shaggy dog charm of Catherine Hardwicke's original installment.


I'm sure I don't need to explain the plot, but the core 'problem' involves a miscommunication between the Cullen clan and the Volturi concerning Bella and Edward's half human/half vampire offspring Renesmee who was born at the climax of the last film.  Long story short, Michael Sheen, Dakota Fanning, and the rest of the draconian governmental society think that Edward and his family turned a child into a vampire, which is a big no-no in the community (since kid vampires never mature and still possess incredibly strength).  So off the Volturi march to theoretically wipe out the Cullens for this transgression, which leads to a painfully plodding middle portion where Edward, Bella, and company drive around the world seeking 'witnesses' who can testify that Renesmee is a natural born hybrid.  It's all quite dull and amounts to little other than offering a skewed version of the whole 'raise your army' device.  This all ends on a snowy field with one of the very best action scenes of the year and perhaps one of the best super-powered smack-downs in cinematic history.

That's not a joke.  Whatever complaints you might have about the lack of set pieces in this series, director Bill Condon throws his chips down for the end game, delivering a stunningly violent (lots of beheading) and brilliantly choreographed (jumping, flying, ground-smashing, death plunges, etc.) mass battle scene that stands as one of the best of its kind.  And since there are enough recognizable characters on both sides of the battle field, it almost never becomes 'random vampire or wolf versus random vampire'.  I can't recommend the film for those disinclined to enjoy this series based on its climax alone, but it's worth the price of admission if you had an inkling of interest in seeing this. The rest of the film offers more modest pleasures.  Its 105 minute running-time (minus end credits and final curtain call) is surprisingly funny and engaging for the first 30 minutes, a stunningly dull slog for the middle 50 minutes, and downright fantastic in its final 25 minutes or so.  There is plenty of offhand weirdness and absurdities on display, although there is no need to run down a list (let's just say the reason Jacob is totally over Bella requires a double-take).  I wish the whole series had less fat, this one included, but those who like their Twilight utterly crazy will get their money's worth here.

The rest of the film is basically the usual Twilight stuff.  Kristen Stewart feels genuinely liberated in the opening reels, as she becomes a full-blown bad-ass vampire (her reaction to Jacob's 'imprinting' is hilarious and arguably appropriate).  Anyone concerned about this franchise's complicated sexual morality should note A) how much sexier the more aggressive vampire-Bella is versus the mopey human version and B) how much Edward enjoys the new and improved Bella ('my wife just took down a wild animal in the woods... that's hot').  I sincerely wish that Billy Burke had been given more to do than play the fool, although he gets some big laughs after he learns a portion of 'the truth'.  Pattinson and Lautner continue to have a joshing chemistry and the actors clearly enjoy trading wisecracks that aren't tinged by romantic jealousy anymore.  One thing this finale does do right is give pretty much all of the major characters a 'big scene' or two, such as the genuinely touching moment where Edward thanks his 'father' (Peter Facinelli looking like a botox-enhanced Cary Elwes) for including him in his vampire family.

When the picture is focusing on the core relationships, both among its lead characters (who again are freed by not constantly engaging in romantic arguments) and its quirky supporting cast, it works as a comic soap opera.  The film nearly dies in the mid-section, which offers to little of interest that Bella basically narrates the entire story as we go along.  But once the Volturi arrive (complete with Michael Sheen's hilarious villainous giggle), the film takes off again and delivers a relatively satisfying finish.  Again, that battle scene alone is stunning, although the way it concludes will surely leave a bad taste in some viewers' mouths, as I would argue its unsatisfying finish will lessen the film's replay value down the line.  Look, this is the fifth Twilight film.  It's not so much better than what came before as to convert new fans, but it is certainly far better than at least New Moon and Breaking Dawn part I and it's a little better than Eclipse (I guess this series is the opposite of Star Trek).  Matching the unassuming charm of the first Twilight, back when this series wasn't the end-all for its fanbase, isn't a plausible expectation.

But for those who do enjoy this franchise's bizarre charms, this fifth entry is pretty entertaining and fun, with moments of character quirk and action brilliance tossed in.  I like that this series existed amid the comic book spectacles and boy-friendly fantasy spectacles.  I like that the series so captivated certain female audiences and operated as a sort of gateway drug into the world of genre geekery.  Whatever issues one might have about the character of Bella and the choices she made, the series ends with its lead female as a super-powered vampire who has mega-strength and the ability to protect those around her from harm.  No matter how she got there, Bella ends her journey relatively empowered, which may qualify as irony.  But the biggest empowerment of all is how the series put female moviegoers in a place to demand mass-market genre fare geared toward them and their fantasies rather than those of the boys/men in their lives.  I wish the series were better written and better acted (especially by much of its supporting cast), but I've had a good time on this goofy little journey.  I'm not sure I'll miss Bella, Edward, or Jacob, but I'm glad I got to visit.