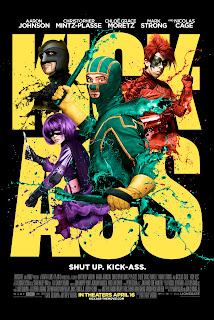 Matthew Vaughn's Kick-Ass is a film constantly at war with itself. It seemingly attempts to be a realistic story about what would happen if people decided to become masked avengers in a real big city, but it quickly gives way to implausibility and over-the-top action that would be more at home in an 80's John Woo picture. It wants you to take its story and its characters seriously enough to care about them, but it's afraid to risk alienating those who thrive on cynical detachment. It is colorful, often well-acted by a spirited cast, and it contains a few terrific action sequences as well as several moments of surprising dramatic heft. As a movie that exists purely to entertain, it gets the job done. But in terms of presenting a more plausible super hero saga, it's no more realistic than Punisher: War Zone, and it in fact suffers from some of the same issues regarding real-world consequences vs. harmless fantasy.

Dave Lizewski (Aaron Johnson) is basically a normal American teenager. He is not popular, but he is not any kind of outcast. He simply roams the halls of high school relatively invisible to all but his close friends. One day, he asks his comic-book geek buddies why no one ever actually tried to be a real-life superhero? They laugh at him, but since he has nothing better to do, he buys a wetsuit and ventures out into the night to fight crime. The initial excursion ends in disaster, but his travails eventually attract citywide attention. Soon, not only has Dave (calling himself 'Kick-Ass') brought the attention of the city's major mob boss (Mark Strong) and the girl of his dreams (Lyndsy Fonseca), but also the watchful eyes of a competing superhero team, the murderous father/daughter duo known as 'Big Daddy' and 'Hit Girl' (Nicolas Cage and Chloe Moretz). Needless to say, things are about to get very complicated very quickly.

The core problem with this adaptation of the Mark Miller mini-series (which I have not read) is that the protagonist is a relatively passive character. Lizewski is basically your everyday comic-reading nerd, and he actually does relatively little of note for most of the story. Aaron Johnson (who also played the young orphan sidekick in Shanghai Knights) is surprisingly strong, but he basically has to play low-key nerd for most of the first half (it doesn't help that he's stuck with a stale 'she likes me because she thinks I'm gay' subplot either). The character does better when the stakes are raised towards the end of the second act. Johnson has a genuine screen presence that has slightly more gravitas than the character probably should. Saddled with unnecessary voice over that once again explains what we can see for ourselves, the film grinds to a halt whenever Johnson is not interacting with the more extreme characters in this universe (where it not for this film, he'd make a fantastic Parker in Marc Webb's Spider-Man reboot). So while director Matthew Vaughn deserves kudos for not letting his scene-stealing supporting characters take over the movie, said decision leaves a giant hole in the film for much of the first two acts.

However, the film shines whenever the spotlight is cast on the other denizens. Mark Strong makes a compelling and almost sympathetic villain even while the film never attempts to sugar-coat Frank D'Amico's murderous ways. Also doing solid work is Christopher Mintz-Plasse, who basically plays it straight as a mob boss's son torn between wanting to be a part of his dad's world and being honest about what that would entail (Yancy Butler has a nearly-wordless cameo as Frank's wife). That this father/son duo actually seems to love each other does wonders for the story. Lyndsy Fonseca tries her hardest to be more than just 'the girl', and she arguably makes the character more compelling than she likely was on the page. Clark Duke and Evan Peters basically exist to have someone for David to talk to. Only Garret M. Brown and Xander Berkeley are wasted as, respectively, David's father and a corrupt cop.

Nicolas Cage and Chloe Moretz make their best efforts to steal the picture as the father/daughter vigilante duo Big Daddy and Hit Girl. Much has been written about the morality and/or exploitation factor of having an eleven-year old girl running around in a tight-fitting superhero costume while swearing and slaughtering people wholesale. While her initial action scene is a bit too cute (she literally looks at the camera with a Sarah Silverman-ish 'aren't I shocking?' glance after every kill), the film quickly acknowledges that she is a case study in rotten parenting and family tragedy. As ex-cop Damon Macready, Nicolas Cage plays a loving and affectionate father who is none-the-less consumed with avenging his wife's death at the expense of even trying to actually raise his daughter (Omari Hardwick has a few solid moments as Cage's former partner). When in costume, Big Daddy dresses like Batman, and Cage does a genuinely witty Adam West impression that serves as a stark contrast to his homicidal crime-fighting. Chloe Moretz as young Mindy Macready never seems fully comfortable in the guise of Hit Girl, and that actually helps make the character more than just a brainless, crowd-pleasing killing machine. The character may make the young boys hoot and holler, but Vaughn is careful to make Cindy Macready into a real human being beneath the cape and purple wig.

While the film looks gorgeous and is rarely less than engaging, there is a constant struggle throughout regarding tone and substance. On one hand, Matthew Vaughn seems to want to make a genre deconstruction, albeit one closer in tone to Scream or Kiss Kiss Bang Bang than Unbreakable or Hancock. So there are token nods to the cliches of comic books and comic book films, as well as token 'real-world' reactions to the idea of a man putting on tights and beating up thugs. The film also occasionally has something to say regarding vigilantism springing out of societal indifference and/or fear to confront the various crimes occurring right outside their window (its all Vaughn can do not to make an explicit Kitty Genovese reference). The film works best when it takes its story seriously and allows the characters to react in recognizably human ways to the somewhat absurd circumstances.

But the real-world implications are tossed out the window at random intervals for the sake of adolescent male fantasy and/or crowd-pleasing action spectacle for the comic book geek crowd. So, in the midst of this 'real-world comic book adventure', we have a young child who can slice and dice a dozen men while her feet barely touch the ground. We have a villain who can murder innocent bystanders in broad daylight with no consequences. We have teen superheroes driving around in a car that theoretically came from Wayne Enterprises or Stark Industries. We have an action climax that is so over-the-top goofy that it would almost be out of place in a Roger Moore James Bond adventure. It's an awkward combination as we're never entirely sure how seriously to take the various acts of shocking violence or general drama at play.

Kick-Ass may not quite succeed as an honest deconstruction and as a mediation on social responsibility, but it works as engaging and occasionally intelligent entertainment. The action scenes are well-staged and cleanly edited and the picture is visually scrumptious. The acting is better than you'd expect and the film does have moments of dramatic heft and occasional insight. It may not really serve a purpose in the pantheon of superhero pictures beyond its R-rated content, but that doesn't automatically make it a bad film. Just don't go in thinking it's going to be anywhere near as amazing as the 'fanboy' crowd has told you. Kick-Ass is a solid B-movie, which was probably the idea before the geeks started drooling.

Grade: B
Posted by Scott Mendelson at 8:26 AM