Review: Lucky McGee and Jack Ketchum's The Woman (2011) is thoughtful and insightful, but more entertaining to talk about than to watch. 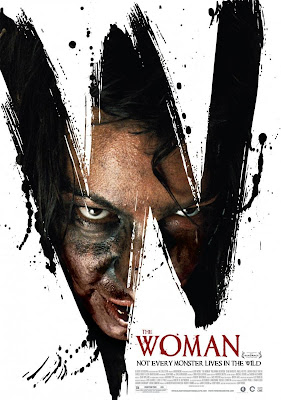 Lucky McGee's The Woman, based on a novel written by McGee and novelist Jack Ketchum, is at once a probing bit of social commentary and a relatively dry horror picture.  It is easy to respect and admire due to its thesis, while it must be acknowledged that it gets where it wants to go pretty quickly and spends much of the rest of the film biding time.  The picture does build tension through silence, and its performances are spot-on throughout.  But its intentions are not subtle and McGee and company plays their hand by the end of the first act.  As a thoughtful and pointed examination of how the patriarchy operates as a tool for gender domination, as well as a look at how society plays 'Pygmalion' to women as a whole, it is worth a look and worthy of merit.  But it works better as a thesis statement than as a piece of genre entertainment.

A token amount of plot.  The film (and novel) is technically a sequel to Offspring. Without going into spoiler-y details for that earlier picture (which I seem to have liked more than most), this film concerns a stereotypical American family whose patriarch captures what is apparently the last remaining member of a violent and 'uncivilized' backwoods clan that has roamed the Northeast Coast for decades prior.  Capturing this young woman (Pollyanna McIntosh) and locking her in his basement, local lawyer Chris Cleek (Sean Bridges) basically attempts to 're-civilize' this apparent savage.  As the 'indoctrination' process proceeds, the Cleek family attempts to make some sense of their father's experiment and different family members react in different ways.  Needless to say, this don't end on an entirely happy note for at least a couple of these people.

The film, at its core, is basically contrasting the forced indoctrination of this 'untamed savage' with the same fear and violence-based methods that he uses to control his wife and daughters.  McGee and Ketchum also comment on the sort of nationwide (planet-wide?) forced-education that affects females, which teaches (nay forces?) women to act in certain ways and dress in certain ways in order to gain the acceptance of those around them.  At the core of the movie is the idea that the point of this widespread process (through enforced gender roles fed through mass media and political discourse) is intended to render women suited for the sexual appetites of men, with no other real need or purpose in civilized society.  In the film, and (implicitly) in modern life, sex is used as a tool of control, but is also the intended end-game in much of how we (as a society) teach women how to behave.

So while the film has a lot on its mind, as well as a thesis statement that I wholly agree with (without endorsing of course), it isn't quite as engaging as a film.  Once the picture establishes its basic plot, it's a somewhat long slog to the admittedly gripping finale (which is where most of the film's violence occurs).  The film does work as a disconcerting character drama, but those expecting a traditional horror film and/or more than a few moments of genuine tension may be disappointed.  The narrative through-line ends up resembling a variation on Jack Ketchum's earlier novel/film The Girl Next Door.  I do not wish the fault the picture for not fitting in a specific genre box, but there is a certain repetitiousness nature to the middle hour of the film.

In the end, The Woman is a film that is arguably more fun to talk about than it is to actually watch.  Playing like a horror film-variation on Alfred Hitchcock's Vertigo (how society trains women to meet certain standards of behavior) and Zack Snyder's Sucker Punch (how society views women as primarily objects to be exploited sexually), Lucky McGee's picture is uncommonly smart and arguably bold in how bluntly he states his criticisms.   Like Snyder, McGee takes a risk in aiming at least some of his ire at the the very people who would enjoy his pictures.  If the film isn't as successful as entertainment as it is as a discussion piece, it can be recommended purely on account of its obvious intelligence.  It may not be a great horror movie, but The Woman is a pretty good film and a wonderful piece of social discourse.

Grade: B
Posted by Scott Mendelson at 2:25 PM