Review: Miss Bala (2012) is a jolting and relentless bit of nasty business. 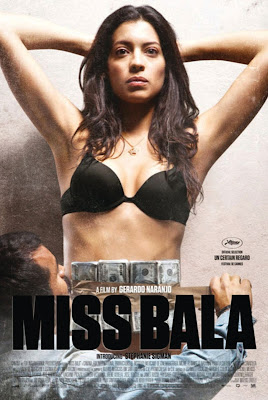 Gerardo Naranjo's bracing and relatively uncompromising Miss Bala operates on two levels.  On the surface, it is a harrowing descent into a slice of hell, seen through the eyes on a single unwitting participant.  Its genre elements kick into gear at around the fifteen-minute mark and never let up until the sobering conclusion.  As a propulsive exercise, it exists as the kind of 'you are there' experience that would put most 'found-footage' horror films to shame.  But it also exists as a brutal reminder of the absurdity of the ongoing drug war and the deplorable circumstances that exist for women in all-too many countries, as well as the lack of options for escaping said circumstances.  It does not really need the onscreen text that more-or-less spells out its message just as the credits roll.  The film itself operates as a powerful social statement, on top of being a pretty solid thriller.

Since the majority of the film is based in constant tension, woe-be-it for me to divulge anything that occurs past the first reel.  Simply put, the film stars Stephanie Sigman as Laura Guerrero, a young woman in Baja, Mexico who sees participation in a beauty pageant as a gateway out of her poverty-stricken existence.  Following the initial admittance process, she and her friend Suzu decide to celebrate at a local somewhat seedy nightclub.  Soon enough, random chance leaves her a witness to a massacre when drug gangs break into the club and gun down a dozen or so party goers.  Laura escapes from the carnage and makes her way home, only to attempt to track down Suzu, who went missing amid the chaos.  It's at this point that things truly go south, and thus at this point I shall stop discussing the plot.

Once the proverbial shit hits the proverbial fan, the picture roars along at an unchecked pace.  But while it's tempting to call it a roller-coaster ride, it's actually something more unnerving.  It's a roller coaster set completely in the dark, with no signs of what will happen next or just what's waiting behind the next corner.  Sigman is in nearly every frame, and her hypnotic performance helps the film avoid turning into a kind of exploitation picture.  The tension sets in as we realize that there really is little that Laura can do or say to affect the outcome other than keep her head just below water and hope for the best.  In a city where corruption is standard, a young woman (especially a young woman) trapped in this maze of horrors is left with no one to turn to even if she does manage to break free.

The picture does threaten to grow slightly monotonous towards the end of the second act, as it comes close to becoming a case of 'okay, what terrible thing is going to happen to Laura and/or what awful thing is she going to have to do next?'.  But the film builds to a genuinely compelling climax, and the final moments aren't so much bracing or head-snapping so much as bitter and sad.  In the end it does work as a pure thriller, albeit not the 'fun' kind.  It also operates as a powerful piece of commentary, explicitly critiquing a system that slaughters tens-of-thousands of Mexicans every year so that Americans (among others) theoretically have a harder time buying drugs.  For people who are already in the grip of poverty, for a gender that often takes disenfranchisement for granted, heaping a genocidal drug war on top of it would be almost comical if the results weren't so catastrophic.

Miss Bala may be a pure stylistic genre exercise at its core, but its thrills and skill is all the more potent for actually having something important to say.