Review: No cheap pop-culture knock-off, 21 Jump Street (2012) is a surprisingly winning character comedy that travels its own inspired path. 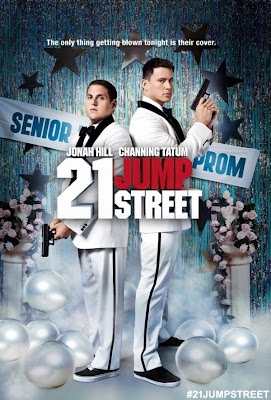 By all rights, this film should be a disaster.  On paper, a comedic reboot of a half-forgotten gritty 1980s crime drama that even its breakout star decried as fascist is the epitome of lazy pop-culture recycling.  But by God, this is a real movie, a genuinely clever and often inspired comedy rooted in character and with a token amount of real intelligence.  Like Pirates of the Caribbean: Curse of the Black Pearl, 21 Jump Street uses its property as a mere jumping off point in order to do its own thing and tell its own tale. Written by Michael Bacall and Jonah Hill, directed by Phil Lord and Chris Miller, it's almost good enough to actually ennoble the current trend of random 1980s/1990s remakes, reboots, and reinventions.

Like the television show that aired from 1987 to 1991 (yes, I watched it as a wee lad), the basic set-up is the existence of a division of the local police force that exists to send young looking police officers undercover as high school students to deal with youth-related crime.  Schmidt (Jonah Hill) and Jenko (Channing Tatum) were not friends in high school, as Schmidt was the prototypical luckless nerd while Jenko was the arch-typical popular dumb jock.  But when they meet up several years later on the first day at the local police academy, they realize they need each other skill set.  The nerd tutors the jock while the jock gets the nerd in physical shape, and they both quickly become friends.  After their first arrest is botched due to a legal technicality, they are both assigned to the 'Jump Street' division.  Seven years after graduating the 12th grade, they will now be sent back into the fray in order to find the dealers and suppliers of a hyper-lethal new drug.  But seven years is a long time, and the two friends again find themselves on opposite sides of the social spectrum, but in the most unlikely of ways.

Arguably the core idea behind 21 Jump Street is the wish-fulfillment fantasy of a would-be loser getting to relieve high school again with the knowledge and 'wisdom' that comes once you become an actual adult.  Although it's somewhat of a coincidence that Schmidt immediately falls in with the popular kids, one of whom (David Franco earning laughs as a politically-correct drug dealer) actually has a connection to the investigation, the film establishes a world where the popular kids are the smart/preppy athletes while the 'losers' are the dumb jocks and the socially-introverted science geeks.  I don't know how revolutionary this is (that pretty much summed up my high school way back in 1999, although everyone mostly got along with everybody else), but this apparent role-reversal allows Schmidt to revel in social acceptance while the former 'big man on campus' Jenko has to deal with being a social pariah.  It works as comedy even if it doesn't seem all that amazing. Since the film is tightly focused on our two heroes, their reaction to it is enough.

Putting aside the film's social implications, it works splendidly as a character-driven farce as well as a potent commentary on the very kind of 'branding' that allowed it to exist in the first place (the explanation for why the long-defunct police program has been reopened may be my favorite joke in the film).  The picture has its share of action sequences, but all of them are rooted in character commentary and they are each peppered with enough satirical bent (for example, the duo keeps expecting vehicle crashes to lead to explosions which never arrive) that they both earn laughs and make the film oddly more realistic than more conventional action comedies.  More importantly, the heroes are so genuinely sympathetic that the action beats have an extra measure of genuine suspense (IE - we care less about whether they catch the bad guys and more about whether they conclude the action in time to make it to an important school function).  Tatum and Hill are both in peak form here, giving real comedic performances that never pause for the joke, never mug for the camera, and never wink at the reality of the situation.  While I'm sure there was plenty of improv, there are only a few moments where it feels like the actors are pausing to 'do a bit'.

Where the film falters just a bit, aside from some action beats that linger too long, is in finding room for its potent supporting cast.  While it may not be a shock to hear that an occasionally vulgar male-bonding comedy shortchanges its female characters, the film is so explicitly lacking in traditional homophobia and misogyny (I think I heard the word 'bitch' uttered once) that it sticks out when Brie Larson (as Hill's would-be love interest) is straight-jacketed during the finale and Elle Kemper (as Jenko's slightly lecherous chemistry teacher) basically disappears after her first scene.  The film has an uncommon respect for its various female characters, it just feels like most of their best bits ended up on the cutting room floor (Dakota Johnson, as a fellow 'Jump Street-er', seems to have an entire subplot missing).  But also sadly underused are Ice Cube, Nick Offerman, and Jake M. Johnson among others, all of whom get a great moment in the first act before pretty much vanishing for the rest of the picture.  It's obvious that the project attracted a lot of talent who came aboard for a day or two for a easy paycheck or a personal favor, but it's a shame that so many incredibly funny actors are left with so little to do.

Having said that, one shouldn't spend too much time complaining about what isn't in the film, when the finished product works so well in its own right.  21 Jump Street is genuinely laugh-out-loud funny, while it takes the time to establish relatable and sympathetic characters.  Despite the R-rating and the profanity and occasional violence to justify it, this is a truly warm and openly sweet movie about two unlikely friends and how their on-the-job crisis affects their relationship.  That it happens to be based on an 80s TV series is completely beside the point.  It treats all of its characters with respect and thus earns ours (it earns huge points for never suggesting that two guys being friends is somehow 'gay' in a derogatory sense), while basing its comedy in real human interaction rather than crowd-pleasing cruelty.  It may not have the tight and laser-focused plotting of The Hangover (which was almost more effective as a genuine mystery thriller than as a comedy), but it is probably the most enjoyable R-rated bro-centric comedy since Role Models.  Warts and all, 21 Jump Street is a great movie and almost a great film.  It's so purely entertaining and hilarious that you won't even feel bad if you have to watch it again when it arrives on Blu Ray in a 30 minutes-longer 'extended cut'.

hmmm...sounds like it could be funny. but then they borrow the title 21 Jump Street, which wasn't traditionally funny...