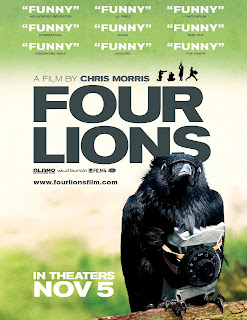 At the beginning of 2009, the online magazine Slate did a comprehensive series basically asking the question "Why haven't we been attacked by terrorists again since 9/11?". It was a series of eight essays running down eight specific theories, ranging on the scale of 'worry a little' to 'worry a lot'. At the head of the 'worry a lot' scale was the idea that it was merely a matter of time before we took another 9/11-size hit on American soil. On the polar opposite was the idea that well, terrorists has a whole are not very bright. Sure, 19 hijackers got past several layers of security and took over planes with common box cutters (and then took advantage of the prevailing wisdom that hijackings usually ended with minimal bloodshed and eventual surrender), but that was more about American intelligence falling short than Al Qaeda being made up of master criminals. Chris Morris's Four Lions plays off this idea for its inherent comic potential. It works surprisingly well, because it dares to not obsess over the inherently daunting idea of laughing at those who wish to kill us.

The four main would-be jihadists are presented as recognizable human beings. Sure some (Barry) are dumber than others (Omar), but the only genuinely unique thing about them is that they are planning to set off explosives in downtown London. It would have been easy to go the Mel Brooks route, portraying these would-be terrorists as complete minstrel-show fools. But Morris takes the time to show them as relatively three-dimensional human beings. The ins-and-outs of planning their attack is merely presented as what these people happen to do with their day. Like many extremists, these bumbling terrorists latch onto martyrdom as a way to lash out for their personal failings. Ironically, the most 'normal' of the four, Omar, is the one most driven by an actual political and social agenda.

The dialogue is often laugh-out-loud amusing and the plot machinations quickly take on a bizarrely domestic nature. While the film has been compared to Dr. Strangelove, it most resembles a This Is Spinal Tap for extremist terrorists. Heck, the opening scene, involving a toy prop gun used for a recorded message, immediately brings to mind the epic fail that was Stonehenge. The film unfolds like, if you can bear with me for a moment, my favorite episode of The Powerpuff Girls, "Just Another Manic Mojo". Like that classic bit of American animation, much of the comedy comes from taking people that we view as comic book super-villains and presented them and their day-to-day evildoing as exceedingly mundane.

And while the film strains not to overtly judge the politics at play, it does unflinchingly examine the real consequences of attempting such a feat. In the end we sympathize with our would-be bombers obviously not out of a desire to see them succeed, but from a realization that they are getting in way over their heads and will hopefully be stopped before its too late for them or their targets. There is a bleak undertone during the whole film, and the film becomes oddly suspenseful as the seemingly inevitable plays itself out. But even during the somewhat tense finale, the picture remains a morbid farce, as a serious discussion about whether a Wookie (ie - Chewbacca from Star Wars) counts as a bear occurs under the grimmest of circumstances.

Four Lions is unique only in regards to its subject matter, and its greatest strength is that it dares to treat that subject matter as relatively run-of-the-mill. Chris Morris refuses to wink at the audience with an "I'm so daring!" condescension, but rather expects the audience to accept the film at face value or not at all. In the end, it is an oddly comforting picture, as it shows just how hard it is to commit a successful terrorist attack, and just how unqualified most who would attempt such a thing actually are. There is a weird kind of hope in witnessing the incompetence of your enemies.

Grade: B
Posted by Scott Mendelson at 1:50 PM

Four Lions is really a funny movie but it’s also an extremely tragic one. This really is a brilliant film that deserves to be seen!