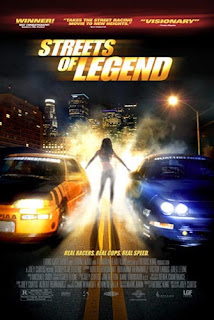 Streets of Legend is a rare breed of movie. It is special in ways that one rarely encounters. It is bad in so many ways it’s criminal. In fact, it IS criminal in one very obvious way. The press materials loudly trumpet that this very low budget tale of love and street racing was shot using hidden camera footage of actual street races. Yes, this epic tale consists of real footage of actual highly illegal street races, as stupid, insecure, or highly bored young males speed down (hopefully) deserted stretches of road at speeds topping 200 miles per hour. I say hopefully as that’s not always the case. I have a friend whose father’s best friend was killed by a collision with one of these idiots back in June, 2003. So to make this artistically vacant film, they in fact facilitated illegal street races putting you and I in greater peril. And the best part is, the film is so incomprehensibly shot and edited, that the footage looks completely fake. Putting aside my disdain for the featured sport, the question becomes, to paraphrase Rent, what’s the apropos way to review a movie, that’s also a crime?

The legality and morality of street racing aside, the film fails on every other conceivable level. The film is filled with first-time actors, and on the basis of this picture, they will still be ‘first time actors’ on their next film. The shot choices and editing resembles a poor freshman student film, with pointless shots of alleged symbolism. The film was shot on the very lowest quality digital video, so it looks like a snuff film shot on Betamax. The press materials boast that this is a 'character-driven' film, but each and every character is unlikable, paper-thin, and dumber than two boxes of rocks stuck together with silly putty. To wit, we have the lead character, Chato, a mean, possessive punk who yells at his mother, abuses his girlfriend, and cheats on said girlfriend with her best friend. Next we have Noza, the girl in contention. She loves Chato, but is furious when he gets caught cheating and gets sent back to jail for failing a drug test.

Derek is the main street racer in the cast, first seen getting upset after he gets a ticket for doing 140 on the highway. Derek’s best moment is his tearful lashing out at the unknown reckless driver who killed his mother. This speech comes after he nearly gets himself and Noza into a wreck because they were um… recklessly driving. The lovebirds first meet as she joins her friends to watch a street race, and they are immediately taken with each other. This might be romantic if, acting and writing aside, Noza didn’t look like she was 12 years old.

But trouble looms when Chato breaks out of the maximum-security prison. Does he break out using a complicated scheme involving full body tattoos of prison blueprints, deals made with the top mobster at the joint, years of architecture training, and a cunning scheme involving digging a tunnel in the old shed with the help of a guy who might be DB Cooper? Nope, but Prison Break's Michael Scofield will punch himself if he sees this film and realizes that all he had to do was kick a soccer ball into the forest, run after it and hop a small fence to glorious freedom. The end involves Chato returning to reclaim Noza, with Derek fighting for his new girlfriend. It is here that the film crosses the line from insulting and ridiculous to morally foul and offensive. It is not the actions per se, but one character’s reactions to said events that cause the film to stop being funny in its incompetence and leave a sour, bitter taste with its alleged worldview.

If it needs to be further said, this film is truly ghastly. It has no real production values, no acting skill, nothing worth looking at on the screen. It also has the added component of being achieved through wanton criminality, and having a vile and contemptuous worldview toward the underclass and toward women in particular. That this film was shown at Sundance is a mockery of quality underground film making. That it’s getting a theatrical release is a sick joke. This film is a blight on the art of film making and should be avoided at all costs.

Grade: F
Posted by Scott Mendelson at 11:19 PM No comments: Links to this post 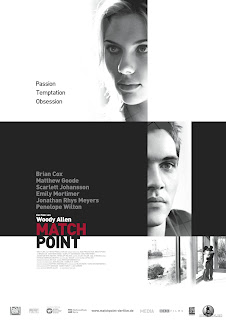 Match Point is being widely heralded as Woody Allen's best effort in many years, and that much is probably true. This critic is not the world's foremost expert on Allen, having seen only a dozen or so of his films. But, Allen's legacy aside, Match Point is a potent romantic drama, which eventually evolves into a brutally quiet thriller. Whether one is an Allen fan or not, Match Point is a terrific film.

The plot, to wit: Chris Wilton (Jonathan Rhys-Meyers). is a British tennis pro, formally a major contender, who takes a job teaching at an exclusive tennis club. He almost immediately hits it off with fellow opera-buff Tom Hewitt (Matthew Goode), who provides the gateway to a better financial and social status. With this new life come the attentions of Tom's sister Chloe (Emily Mortimer), the paternal devotion of father Alec Hewitt (the always welcome Brian Cox), and the
temptation of Tom's fiancee, Nola (Scarlett Johansson). Complications ensue.

That's all the plot one needs, as the film works best with less known about its outcome. The picture slowly envelops you in the life of Mr. Wilton just as surely as Wilton is ensnared in the new life of luxury, privilege and business success. The film ultimately comes down to a belief in luck versus skill, chance versus fate, and comfort and security vs. dangerous, unpredictable happiness.

As stated above, the film eventually develops into a terribly tense thriller of sorts. But it is not a conventional thriller of action, violence, and jolts, but a tense, low-key armrest grabber in the
Claude Chabrol vein, where sympathetic characters make questionable decisions and are constantly caught by their own foolishness. Whether any of this tension is relieved and in what manner will not be revealed here, but it should be noted that there are more moments of sympathetic edge-of-seat tension in this film than in any film released this year. Who would have thought that, between the two major Brian Cox films released this year, the Woody Allen drama would out-suspense Wes Craven's terrific Red Eye? And who would have thought that the normally sinister or methodical Brian Cox would play two completely virtuous and sympathetic fathers in a row?

It's merit as an unlikely suspense film aside; the picture is a visual and acting triumph. The London locations are obviously a new venue for Mr. Allen, and it provides an interesting view into modern British social privilege. Every actor involved is in peak form, and every major character gets several shadings to his or her persona. The two female leads are completely desirable in completely different ways, allowing viewers to sympathize over Chris's dilemma. Sure, Chloe is a bit needy and not terribly sensual, but she's sweet, intelligent, and occasionally playful. Oh, and she's played by Emily Mortimer, which means she's cute as can be, although the English accent is probably more of a draw for a Yank like me then for someone living in London in the first place. As the requisite femme-not so-fatale, Johansson plays Nola in a manner similar to a Daisy Buchanan. Her highly seductive opening scene is never matched, and there is a sense that she never really was that person from that moment, no matter how much others want her to be.

Of course, at the center of the drama is Chris Wilton, a burned out tennis pro who seemingly lives only for new challenges. While he is not a thrill seeker per se, his pursuit of challenge provides constant difficulty as he quickly loses interest in any goal achieved. For him, life is a continuous tennis match against a top seed, with only a little luck deciding the victor.

In this case, the victor is surely Woody Allen. By moving away from his comfortable New York locations, and trading in his quirky off-the-cuff comedy for almost Shakespearian black comedy, Mr. Allen has sacrificed none of his trademark themes and motives, and he has reaffirmed himself as one of the premiere filmmakers of this generation, last generation, and the generation to follow. Match Point is one of the very best films of the year.

Grade: A-
Posted by Scott Mendelson at 9:54 AM No comments: Links to this post