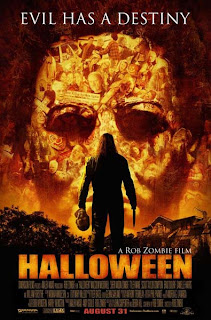 Rob Zombie's Halloween is among the most misguided, confused, and unfocused films I have ever seen. On its face, it is a remake of the classic 1978 John Carpenter slasher picture that kick started the modern day horror stalker/slasher picture that has provided steady product for the last 29 years since. But Zombie tries to have it both ways. He adds his own contrived spin to the Michael Myers mythology, while at the same time trying to appease the fans of the original by cramming in all of the original material as well, plus bits and pieces from Halloween 2 and Halloween: The Television Edit. As a Halloween picture, it is inferior to every other Halloween sequel. Regardless of its worth as a remake, it is a stunningly terrible, borderline offensive motion picture.

The plot: At the age of ten, young Michael Myers (Daeg Faerch) is already damaged goods. Living in a stereotypically redneck home, with the stereotypically redneck home life. After his sister ditches 'trick-r-treating' with Mike in order to have sex with her boyfriend, young Michael goes on a killing spree. Myers is immediately committed, where he is treated by a young Dr. Samuel Loomis (Malcolm McDowell, not coming anywhere close to the pathos that Donald Pleasence brought to even the sorriest sequel). Eventually, the film skips forward fifteen years, where Michael manages to escape from an asylum and return to the town of his original murder spree.

It's obvious that Zombie only cares about the overlong first act, where he parades around white-trash clichés in a ridiculous attempt to gain audience sympathy for Myers' murder spree (and convince us that growing up in a conventional abusive redneck household will turn you into a silent supernatural stalker of the night, as opposed to an Ed Gein or Ed Kempler-type serial murderer). The second act truncates the entire narrative of the original Halloween into 30-minutes of screen time. None of those in peril are developed and there is no suspense to speak of. The entire middle act is just one brutal, savage, and arbitrary execution after another. There is no set-up and no character development to allow us to care about any of the ill-fated targets.

With the original Halloween, John Carpenter was accused of ending the sexual revolution by equating premarital teenage sex with death (something he has jokingly apologized for). In Rob Zombie's version, there is often nothing onscreen for us to view except sex and death. For the entire second act, we see nothing but teenagers swearing at each other, having sex with each other, then being brutally knifed to death. But the violence is so cruel, and the victims such cardboard, that one gets the idea that Zombie is truly rooting for Myers, as to fulfill some nihilistic view of humanity that would probably be cool to an eleven year old boy. Most disturbing is the way that Zombie seems to lavish detail on the pain and suffering of the most morally upstanding characters, while giving quick deaths to the amoral characters on the chopping block.

Acting-wise, the cast does what they can. Malcolm McDowell gets to utter a few 'He's super-ultra evil!' speeches that Pleasence made so memorable, but he barely has enough screen time to craft a performance. The soul of the original, in fact the original series, was Pleasence's Captain Ahab-like Loomis. His sad, tragic descent from respected doctor to borderline insane monster-hunter gave the sequels a gravitas that they otherwise would have lacked. Even Halloween 6, filmed as Pleasance was dying, had a sorrowful power as Loomis had given up the ghost only to find he had nothing left to fill his remaining days (a parable of the once distinguished actor becoming trapped in the disrespected horror genre?). In this version, Loomis is reduced to that guy who you think will show up to save the day at the last minute. The rest of the cast members are onscreen for only a scene or two before their bloody demise, so none of them register in the slightest.

Halloween is 45-minutes of contrived back story, followed by 30-minutes of one completely context-less murder after another, followed by the obligatory climactic chase scene which generates zero suspense because the audience is given no reason to root for either party. It is perilously close to a snuff film, with absolutely nothing to say and no real reason to exist. Zombie's previous films were flawed, but they were interesting, warts and all. House Of 1000 Corpses was a throwback to the 1970s horror freak show genre, while The Devil's Rejects directly deconstructed many of the nasty staples that we claim to love about horror films. Halloween is none of these things. It's not scary. It's not fun. It's not smart. It's simply really violent. Savage violence for the sake of savage violence is worse than offensive, it's boring.

Grade: D+
Posted by Scott Mendelson at 11:02 AM No comments: Links to this post