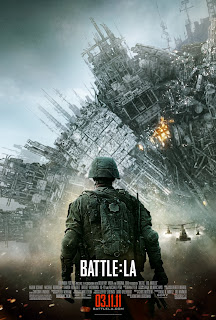 Rare is the movie that loses points for being too realistic. But Jonathan Liebesman's alien invasion picture feels less like an epic and more like a genuinely plausible war picture. This is not a bad thing, and the film is generally successful at showing what the military response to such a domestic threat might be. The film is basically Black Hawk Down, with the faceless marauders being from outer-space instead of militant indignant people. While the marketing promises scale, the film merely delivers claustrophobic survival with no real deeper meaning that would give the carnage any real weight. Liebesman gets the details seemingly right, but the end result is a war picture where the fact that the invaders are from 'up there' seems almost beside the point.

The plot is pretty simple. Alien forces have invaded the entire Earth, with complete annihilation on their would-be minds. Countless major cities have already fallen, and the film focuses on a single platoon sent into Los Angeles to search for survivors and transport them to safety. Joining the mission just before his retirement is SSgt. Michael Nantz (Aaron Eckhart), who is now forced to serve alongside those who still resent his decision making during the Iraq occupation, which led to several of his men being killed. That's basically it. The film wastes little time on setup or fleshing out the various servicemen who will be in harm's way, and the stakes are established pretty quickly. We get only the barest details on Nantz's fellow soldiers: one has a pregnant wife, one is about to get married, one has a brother who was killed under Nantz's command, etc. Like Black Hawk Down and Gettysburg, the film is entirely concerned with the planning and execution of armed conflict.

All of the acting is exactly as good as it needs to be. There are no real 'big scenes', which also means a genuine lack of melodrama. Along the way, we meet a handful of refugees and TSgt. Elena Santos (Michelle Rodriguez), a sole survivor from a decimated squad who may have information on how to better defend against the alien menace. But the core of the film is about the difficulty of merely getting from point A to point B without loss of life. This leaves the film a bit adrift in the second and third acts, as we are constantly told that 'once they get HERE', then they'll be safe', only to have the goal post moved yet again. The film is nearly two hours long, yet the set-up is dispensed with in the first twenty-minutes or so, leaving an extended middle act of episodic incident and an entire last act that is one false ending after another.

For most of the film, we see the invasion from the soldiers' point of view, seeing only what they would witness as they go from house to house to find safe transportation. The film does occasionally cheat, showing us wide shots of full-scale alien destruction, if only so the trailers would have something to advertise. While the majority of the film feels claustrophobic and rather contained, the finale does open up the scale quite a bit and delivers on the promised 'money shots'. But for most of the running time, Battle: Los Angeles comes frighteningly close to resembling one of those seemingly epic action/horror stories that takes place in a few cheap interior locations. Like any number of films that tries to look more expensive than they are, there is much that is merely suggested rather than shown, and you rarely get a feel for the large-scale nature of the operation until the finale. To be fair, the film does eventually get pretty big right in time for the end.

Having said all of that, the film has a certain apparent realism that gives it credibility. While (generally speaking) characters die in just about the order you would expect them to, there is a jolting offhand nature to the carnage. Perhaps because of a need to secure a PG-13, more than a few major characters die in relatively obtuse, nearly-offscreen fashions, leaving us to only realize who perished when we take a moment to notice who isn't standing (to be fair, that is probably how it goes in real combat as well...). While the film is indeed relatively light on blood and gore, it does not skimp on showing the lives lost in the carnage. Unlike, say, Cloverfield, there are dead bodies everywhere. And there is an extended scene where the soldiers capture a wounded creature and basically perform a live dissection in order to find a weak spot. It's a creepy moment, but it really has no pay-off in the later narrative.

In the end, Battle: Los Angeles is pretty successful at what it sets out to do, but the picture often fails to engage beyond surface level technical pleasures. Those wanting an alien invasion picture on the scale of Independence Day will be sorely disappointed, as the film truly focuses only on the carnage affecting Los Angeles as opposed to worldwide destruction. It lacks any deeper meaning and thus lacks relevance. Still, as a war picture that just happens to involve out-of-this-world enemies, it is relentlessly grim and frighteningly plausible, even as it lacks the emotion that its marketing offered up (again, blame the trailer music). It is not a bad picture but (and I may be the only critic who writes the following sentence), as a fan of Texas Chainsaw: The Beginning, I was expecting a little more.

No,no,no,no,no. Ridiculous, overwrought, zero suspense from the first frame AND horribly shot with nauseating shaky camera. Didn't think there could be a worse alien movie than Skyline, but I was wrong.

YYou judge the movie based off an assumption made while watching its trailer, then say it's no good because it's neither epic nor melodramatic. You are right it isn't epic, but war rarely is, melodrama has no place in it either. Please do not review a movie based off what you want it to be, but instead what it is. This movie was realistic in its depiction of war, I've seen enough independence days, or close encounters, this was not them.

I DID review the movie that it was, which is why I bent over-backwards to be fair about its strengths rather than write it off as garbage like most critics did. AS a grim claustrophobic war picture that happens to involve aliens, it is a merely okay movie that just barely earns its B-.