Remember when the Pirates of the Caribbean series was about an ensemble? On Stranger Tides gets a Jack Sparrow-only poster. 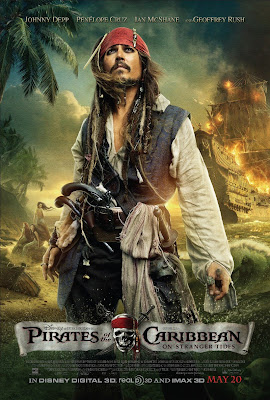 Looks like Disney is selling the only trump card it has. And, personal annoyances aside, I can't really blame them. They sold Tim Burton's Alice in Wonderland as "The Mad Hatter Movie" and made $1 billion worldwide. Still, it is a little depressing considering how the prior series posters remembered to highlight the actual main characters (Elizabeth Swann and Will Turner) alongside the scene-stealing supporting character that is Mr. Jack Sparrow. I'll gladly walk the plank if Rob Marshall actually makes his first-ever good film, but this feels more like a cash-grab with every additional piece of marketing. We'll see soon enough, on May 20th. Thanks to IGN for the 'get'.

I think a lot of people are more excited for this latest Pirates film BECAUSE the focus is on Jack Sparrow rather than Will and Elizabeth. They were hardly interesting protagonists to begin with

Whatever the writers of the first three films intended with Will and Elizabeth to Joe Public the lead character was and will always be Jack Sparrow. It was Depp that got the boost to superstardom after the first film's release and not Bloom and as Tom says if either the Bloom/Knightley characters had been interesting/well acted in the first place I could see your point Scott.

I'm actually thinking the real star here is whatever the hell Jack Sparrow is looking at. He's got a very peculiar look on his face -- one of content and awe. I'm guessing there's way more to this film than meets the eye.