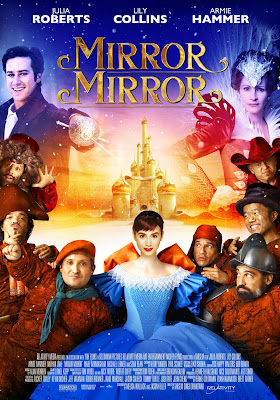 The good news is that Tarsem Singh's Mirror Mirror is nowhere near as obnoxiously zany and aggressively annoying as the trailers seem to suggest.  Frankly, the most eye-rolling moments of the marketing campaign aren't even in the movie, and I'd be hard-pressed to name more than a few pop-culture references over modern-anachronisms.  And the film is surprisingly nonchalant about gender, presenting a heroine and  female villain whose respective strengths and flaws have little to do with their gender.  But the film is strangely immobile throughout, feeling less like a cinematic experience than an overlong stage-play with expensive costumes and occasionally well-constructed sets.  Every scene goes on too long and every performer seems too tired to give it their all.  When the first trailer dropped, I derisively compared its apparent tone to the live-action Cat in the Hat.  As horrible as that film is, Mirror Mirror could have used some of its boundless energy.


The plot concerns the Snow White legend, more or less.  Orphaned by a mother who died in childbirth and a father who disappeared when she was just eight, Snow White (Lily Collins) lives with her 'wicked stepmother' in the royal castle.  The wicked stepmother (Julia Roberts) has made herself queen and squandered the kingdom's finances for lavish and selfish purposes.  On her eighteenth-birthday, Snow White finally musters the courage to venture outside the castle walls where she discovers that the queen has left her kingdom in disrepair.  The people are starving due to continued taxation and Ms. White vows to convince a visiting prince (Armie Hammer) to use his standing army to topple the queen and restore her own rightful and just place on the thrown.  Yes, there are 'dwarves' too, but they are this time represented as bandits who eventually decide to stop stealing for their own selfish desires and instead do it Robin Hood-style.

The film's politics are arguably open for interpretation.  If you're a Democrat, you'll see the Queen's lavish and selfish spending sprees and its resulting economic disaster as a metaphor for George W. Bush.  But the apparent evil of taxation is so emphasized that the Grover Norquists of the world will merely read it as a Libertarian parable (Ridley Scott's Robin Hood had the same issue, where its W. Bush metaphor was read as a pro-Tea Party rebellion picture).  Interpretations aside, the film suffers from a distinct lack of verve.  It has lush and gorgeous costumes, but most of the sets are relatively unimaginative and/or lacking in a variety of colors.  And while the acting is never-less-than-convincing, everyone seems to be playing it not for high camp or even high-energy, but as a muted and realistic period drama.  Lily Collins, Arnie Hammer, even Julia Roberts rarely rise above polite conversational volumes.  I'm all for low-key when it's appropriate, but this is a seemingly kid-friendly fairy-tale adventure where all of the players act like they just came off one of those five-hour energy shots two hours early. Of course how much of this is the fault of the actors and the director is open to debate, as the film is among one of the laziest editing jobs I've seen in a major feature in quite some time. Every scene plays too long and too slow, with the picture playing less like a cinematic feature than a poorly-blocked play. All of this has a cumulative effect of draining the energy and life out of the film.

This is a shame because the film does avoid certain pitfalls. While the trailers played up the whole age vs. beauty meme, Julia Roberts still looks gorgeous and her villainy or unattractiveness is never connected to her age or her gender. The prince prefers Snow White because she is kind and flirtatiously sweet, while Roberts's queen is patently rude, snide, and openly power-hungry to the point of mass cruelty. And the film never treats the idea of a strong/independent Snow White as a big deal, as Collins's passivity is clearly due to forced isolation rather than any gender expectations. Once she gains her freedom, empowerment (fueled by wanting to save her now-destitute subjects) comes naturally. While Collins is indeed a knock-out, the film never implies that Roberts is some haggard old crone unworthy of love and happiness. At the end of the day, the fact that the hero and the villain are both women is all-but-irrelevant to the arc of the story.

Still, what Mirror Mirror does right cannot counter-balance what amounts to a stunningly dull and near-lifeless presentation. The film fails as a visual treat, a lively family-friendly adventure, a comic romp, or any of its other apparent goals. The best I can say is that it contains nothing that will bother or upset even the youngest children, which is perhaps noteworthy in a time when everything live-action is PG-13 and even PG-rated animated features are often too intense for younger kids. But when the best I can offer is what it doesn't have or what mistakes it doesn't make, that's not saying much at all. The underrated and under-seen Ella Enchanted covered much of the same territory with far more aplomb, and I cannot recommend it highly enough as a substitute.  My four-year old daughter claims she liked Mirror Mirror, but I honestly think she didn't want to hurt my feelings. She didn't laugh once.  I'm sure she'll enjoy Ella Enchanted.

i figured it would be pretty lame. disappointing that tarsum seems to be falling short. i guess two movies in one year is a bit too much for this once reclusive director!
(by the way, the actor playing the prince is named Armie, not Arnie)

hmmm i actually really liked it, and i thought the cast carried it well. i think it played to a lot of different themes--like feminism and economic decline--without hitting us overt the head with them. colins could have used more life in her performance, but that's about it, to me. i thought it was cute, not earth-shattering, but cute

I loved it. the sets, the costumes, the seven dwarfs and their relationship with Snow. All the kids the audience seemed to love it. Maybe you should take your daughter's comments for face value than trying to project your own. :-D~

i loved the movie.Loved everything about it.It was funny and everybody loved it.People even stayed for the credits.