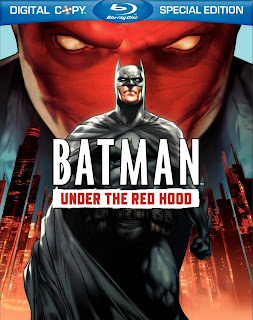 Batman: Under the Hood
2010
76 minutes
rated PG-13 (violent content and some drug references)
Available from Warner on DVD, Blu Ray, OnDemand, and iTunes on July 27th

When approaching a comic book arc, one must critique both the story being told and the manner in which it is presented. Judd Winick's "Under the Hood", which ran in Batman from February 2005 until April 2006 is a fast-paced, exciting, and wittily-written crime story that suffers from a single fatal flaw: its narrative basically undoes a good sixteen years of continuity purely on the whims of Mr. Winick's personal fandom. However, this DC Animated Universe feature does not have the burden of its comic book heritage. Since it is not connected to any particular continuity and has no bearing on future stories, it can stand on its own as a sharply plotted and entertaining little Batman story.

A token amount of plot - A new masked operator is in Gotham, taking control of the drug trade and slaughtering anyone who might stand in his way. Calling himself The Red Hood, this self-styled vigilante is attempting to control the underworld rather than endlessly battling it, believing that regulating the criminal element can at least minimize collateral damage. Needless to say, crime boss Black Mask is not amused, as he has only recently united most of the city's gangland, the first such kingpin to do so on twenty years. Batman and Nightwing (the first Robin) are on the case, and the Dark Knight quickly realizes that there is something all-too familiar about the methods of this murderous crime-fighter. What connection does The Red Hood have to Batman, and how is The Joker involved?

Freed from the ongoing storylines that intruded on the original comic arc, this stand-alone crime story is an exciting and relatively clever mystery. Judd Winick has adapted his own storyline, successfully trimming fat and creating an adventure that works for fans and casual viewers. To Winick and director Brandon Vitti's credit, they know full-well that most viewers will know exactly what's going on from the get-go, so the obvious identity of the Red Hood is confirmed halfway into the feature. And said reveal is far less infuriating in this theoretical one-off Elseworld feature than it was as a piece of cannon in the DC Universe. Compared to the original source material, it is about equal. Wade Williams is overbearingly angry as the Black Mask where as his rants on the page came off as knowingly sarcastic. Conversely the climax, a lengthy conversation/moral debate between the Red Hood, Batman, and The Joker, is a vocal powerhouse and is far more emotionally potent onscreen than it read on the page.

Occasional emotional turmoil aside (and it's not nearly as moving as the superlative Batman Beyond: Return of the Joker), the film is primarily a violent action thriller that puts an emphasis on gun play, fisticuffs, and explosions over character development. The fights and explosions come at a furious clip, and the filmmakers use their PG-13 to their advantage. Although slightly lower in body count than Chris Nolan's The Dark Knight or Tim Burton's Batman, this is actually a more graphic and bloody picture than any of the live-action Batman films. Still, you can tell that the producers were genuinely worried about snagging an R, as some of the major violence (such as the brutal onscreen murder of a major character in the opening moments) is edited in a somewhat obtuse manner. To be fair, The Dark Knight had this same issue as it too attempted to tell an R-rated story in the PG-13 format. But the action scenes are relatively impressive, with clean editing and robust fight 'choreography'. As with most of the DCAU features, there are one or two too many action beats, but it's not a fatal problem.

Acting-wise, the cast does a fair job with a number of iconic characters. John DiMaggio gives a fine read on The Joker, presenting a less manic, more logical persona than the wild-card variation that Mark Hamill made his own back in the 1990s (it's fascinating to listen to a Joker whose voice doesn't crack every fourth word). Jason Issacs has little of interest to do or say as Ra's Al Ghul, but he still lacks the gravitas that David Warner brought to the role once upon a time. Bruce Greenwood and Neil Patrick Harris make a fine Batman and Nightwing, even if they occasionally sound too similar to Kevin Conroy and Loren Lester. Jensen Ackles brings a suitable cocky menace to the title villain, but he too sounds a bit like a Will Friedle who played a protege of the elder Bruce Wayne in the futuristic Batman Beyond. Yes, it's not fair to constantly compare these fine vocal talents to their predecessors, but it should be noted that most of them do not particularly differentiate themselves from their Batman: The Animated Series counterparts. At least when you watched The Batman, you knew you were getting very different reads on these classic characters. Said similarities does not constitute a flaw in the performances or the film itself, merely a curiosity.

The plot is successfully fitted to operate as a stand-alone story, shorn of any crossovers or tie-ins that surrounded the original arc (no "War Games", no "Infinite Crisis"). The streamlining generally improves the story, with only a few hiccups along the way (Ra's Al Ghul feels guilt after The Joker commits one egregious murder while on his payroll, but no guilt for the reckless slaughter of countless innocent bystanders during the same operation). The mere 75-minute running time is again a detriment, as only a couple characters are allowed to react to the revelation that is the Red Hood's identity. Nightwing pretty much disappears halfway into the picture, and Jim Gordon gets a single line of dialogue in the third act. I didn't care much for Wade Williams's quick-to-anger take on Black Mask, but it is good for some comic relief. Like many of the prior DCAU movies that are not origin stories (think Superman/Batman: Public Enemies), the viewer must enter with a working knowledge of the DC Universe for the film to have any real emotional impact. But I can't imagine too many people buying this title who haven't at least glanced at the several stories referenced here.

Overall, Batman: Under the Hood is a brisk, exciting, and violent roller coaster that improves on the source material purely by existing as a stand-alone narrative. The film is emotionally cold until the climax, but it compensates with solid action, low-key voice work, and an engaging cast of heroes and villains. It works for fans of the characters, fans of the story, or just those who want to sample an animated Batman that's closer to the Chris Nolan world than the Superfriends universe. While not on par with Wonder Woman or The New Frontier, Batman: Under the Hood is superior to Superman/Batman Public Enemies, Crisis on Two Earths, and Batman: Gotham Knights.

The picture and sound are generally pretty solid, as is the norm with these animated features. The visuals are bold and colorful, and the 1080p transfer highlights the razor-sharp animation. The English 5.1 DTS HDMA is pretty flawless, aggressive, loud, and multi-directional when appropriate. And, of course, the dialogue is always easy to hear and understand (the feature also has a Spanish 5.1 mix). The feature comes with English SDH, Spanish, and French subtitles (I noticed at least one missing SDH sub, for an offscreen gunshot). As usual with the DCAU titles, there is a decent collection of extras. As usual, there are a sampling of bonus episodes from a relevant Bruce Timm cartoon. In this case you get four episodes of Batman: The Animated Series, and they are four of the better ones ("Robin's Reckoning" part 1 and 2, "Mad Love", and the all-time classic "The Laughing Fish"). You also get several previews for past DCAU features and a ten-minute sneak-peak at the next one. In this case, it's Superman/Batman Apocalypse. It's an adaptation of the 'Supergirl returns' arc from the Superman/Batman comic, but since DC has a ban on female superhero cartoons (Wonder Woman didn't sell enough DVDs or Blu Rays fast enough for the execs), the film is titled to focus on Superman's war with Darkseid.

Like the Crisis On Two Earths, this one comes with a ten-minute short cartoon showcasing a B-level character in the DC Universe. In this case, it's Jonah Hex. The short cartoon is fine, well-acted and artfully composed, but it lacks the artful charm of The Spectre. Finally we get two documentaries. The first, running 24 minutes, is "Robin: The Story of Dick Grayson", which details the history of the Robin character and Grayson's eventual evolution into Nightwing. The second, and a Blu Ray exclusive, is "Robin's Requiem: The Tale of Jason Todd". This 20-minute featurette deals with the second young man who wear the Robin suit, what happened to his character on the page, and the very-real public outcry that followed way back in 1988. Nothing on either of these documentaries will come as a shock to a Batman fan, but newbies will be quite educated and the effort is appreciated. Oh, and there is a standard-def digital copy as well, for those so inclined.

We have a pretty good movie, a decent audio/visual presentation, and a large batch of worthwhile extras. I wish this title had been on a BD-50, and that the feature had been 15-minutes longer, but this is easily the best DCAU film since Green Lantern: First Flight. Overall, this is a must-purchase for the hardcore fans and the completists, and a must-rent for those even casually curious.
Posted by Scott Mendelson at 8:40 PM

I agree with you entirely, but being such a Kevin Conroy fan I felt some of the voices were off kilter (especially Nightwing).