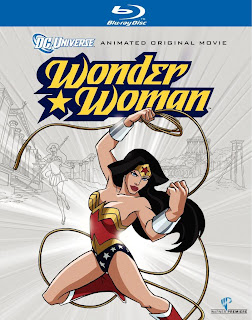 For at least the last twenty years, Warner Bros and DC Comics have struggled in vain to launch a live action feature for the female member of DC's holy trinity. While Superman and Batman have both come, gone, and returned, Wonder Woman has yet to find her way to the silver screen. Warner Bros can take their time. Meanwhile, fans and newbies alike can enjoy the animated feature of the legendary Amazon princess. Exciting, funny, violent as hell, and displaying an almost angry feminist streak, Wonder Woman succeeds so well as a definitive origin story that it almost renders the eventual live-action movie a moot point.

A token amount of plot - Born of clay as a gift from the Gods, Princess Diana spends her days training for battles that will never be fought, as she lives with her mother Hippolyta and her many Amazon sisters in the mysterious, peaceful island of Themyscira. Long shielded from the realm of man, the inhabitants of Themyscira are tested when American fighter pilot Steve Trevor inexplicably crashes into their world. Left without recourse, Princess Diana must deliver Steve Trevor safely back to America while simultaneously hunting down Ares, the God of War whose past rampage caused Queen Hippolyta to isolate her people.

While the plot is relatively routine, the film delivers in spades elsewhere. The animation is razor sharp, per the norm for the Bruce Timm gang. The drawings are slightly more angular than those found in Justice League, and the character models reflect a strong attempt to differentiate itself from the 1990s Timm cartoons. The all-star cast (including Virginia Madsen, Alfred Molina, Rosario Dawson, and Oliver Platt) never become bigger than their characters, and it is a testament to them that I didn't spend the whole film playing 'guess the voice actor'. The characters are vivid and sympathetic, and the dialogue is sharp and quippy. Even the villains are given shading. The emotional high point involves a dying declaration of a traitorous sister, as she plausibly explains why she turned on her fellow Amazons.

The many action scenes are both epic in scope and intimate in detail. Parents of very young children are forewarned - this one earns its PG-13. The film is filled with pervasive, painful, occasionally bloody violence (the first cut apparently earned an R). The opening and closing battles are a joy to behold, and they represent some of the finest action set pieces in the DC animated universe. And, as befits its nature as a true feminist film, the picture does not shy away from showing women viciously killing and brutally dying in battle (although co-writer Gail Simone resists the urge to have any Amazon warriors perish via refrigerator). But the film works as a character comedy as well, as the somewhat contrived Diana/Steve romantic subplot gives way to clever banter and genuinely witty repartee. Actors Keri Russell and Nathan Fillion have genuine chemistry, and that fabled 'lasso of truth' provides the thrust for a few terrific gags. While one could argue that Wonder Woman shouldn't need a male companion in her maiden voyage, the partnership lends itself to surprisingly substantive commentary regarding the role of gender in modern American society (including, at the very least, the thin line between chivalry and chauvinism).

As Diana travels New York City, she is shocked to see female children taught that they are less than their male counterparts, while female adults feign helplessness as a means of flirtation. Refreshingly, director Lauren Montgomery and writers Gail Simone and Michael Jelenic do not simply toss the Wonder Woman character in a story where her womanhood is irrelevant. The creators also refuse to pat themselves on the back for creating a film involving a female super hero. Instead, they present the idea of such a hero as normal and expected, blisteringly questioning why it should be noteworthy at all. This is not a perfect film. A first act dogfight goes on much too long, and the story is still a relatively conventional origin story. Furthermore, I still bemoan the inexplicable demand for a mere 75 minute run time, especially in a film that is aimed at older kids. But in every other way, Wonder Woman is a terrifically entertaining action picture, with fully drawn characters, clever dialogue, and a clear and specific point of view. And the final scene provides an absolutely perfect caper that will have fans and geeks grinning from ear to ear. Wonder Woman is not a masterpiece, but it is awfully wonderful.

The Blu Ray: The extras on this one, like all the DC universe original features, are worth the purchase by themselves. We have four bonus Justice League episodes, although 'Paradise Lost 1 and 2' are pretty bland, per much of Justice League's first season ('To Another Shore' and 'Hawk and Dove' are much better). There is a trivia-filled feature commentary, two full-length documentaries that I haven't had time to watch yet ('Wonder Woman - a Subversive Dream' and 'Wonder Woman: Daughter of Myth'), and a sneak peak at the next DC animated feature - Green Lantern.
Posted by Scott Mendelson at 10:18 PM