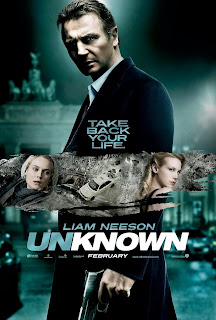 Jaume Collet-Serra's Unknown is an honest-to-goodness Hitchcockian thriller, a variation on the classic 'innocent man on the run' template. Like William Shakespeare, we discuss Alfred Hitchcock in hushed and overly reverent tones, forgetting that the man made pulpy entertainment for the masses. Hitchcock films, by-and-large, were crowd-pleasing pot-boilers that were intended to thrill, startle, and often amuse. In lesser hands, the filmography of Hitchcock could easily be discounted as a bunch of B-movies. I don't think even Jaume Collet-Serra would argue that his are comparably lesser hands, but the awkward and uneven picture shines brightest when he's willing to engage the audience as a merry prankster.

A token amount of plot: Dr. Martin Harris (Liam Neeson) has just awoken in his hospital bed in Berlin. In Germany to attend a bio-science conference, his taxi went off a bridge and he's been in a coma for four days. As he shambles out of bed to find his wife (January Jones), he is beyond startled to discover that no one at the conference recognizes him, including his wife. Even more perplexing, there is another man (Aidan Quinn) who claims to be Martin Harris, and he's doing a pretty convincing job of it. Oh dear...

The good news is that much of this is laid out pretty quickly. The bad news is that means the film has an awful lot of time to investigate red herrings and false leads before finally giving us the answers that we theoretically crave. Speaking of distractions, Neeson is immediately tailed by a couple of goons, which gives us an excuse for gratuitous fighting and a chase scene or two. These are the kind of ruthless bad guys who will instantly slaughter anyone who gets in their way, unless your face is on the poster, in which case they will incapacitate you first and procrastinate the actual murdering until you can escape. Without going into details, if you stop and think about how the various villains in this picture are eventually dispatched, you realize that they are among the least competent group of bad-guys this side of a 1980s Saturday morning cartoon.

I could complain about the uselessness of Diane Kruger as the cab-driver who was involved in the initial accident and now helps Neeson track down answers, but man-on-the-run thrillers almost always have gratuitous female companions. At least she protests a bit more when Neeson's involvement in her life results in the murder of a fellow cab-driver. The only other interesting characters of note are Bruno Ganz as a former spy turned private eye and Frank Langella as well, that would be telling... but you can probably guess that Langella does not play the helpful policeman who shows up in the nick of time with flowers and a puppy. Ganz and Langella actually have an extended scene together, and it is easily the highlight of the film. Jones does her usual ice-queen shtick, while Liam Neeson struggles to appear vulnerable despite being Liam Neeson. Look, Neeson is about twenty feet tall, is still built like a small tank, and has a scowl that could break glass. The very things that made him so effective as a force of nature in Taken makes him less credible as an innocent man on the run from scary forces outside of his control.

Point being, the film doesn't so much slowly unravel the puzzle as kill time before it's all laid out for you. Even with a few token action scenes, much of the middle act of the picture flirts with boredom. But the picture kicks to life in the final half-hour or so, when all is revealed and Jaume Collet-Serra remembers that he's the guy who made Orphan. Once Langella finally enters the picture, Unknown begins to indulge in a bit of batty business, including ludicrous plot revelations and cheerfully silly moments of preposterous violence. But of course, once we find out what's really going on (assuming you're lucky enough to have avoided the thrill-spilling trailer), you'll sit there and count the ways that the film actually functioned according to the Idiot Plot. But if you can turn off said brain, there is a token bit of amusement in the finale, including the funniest bit of violence since the stockholders meeting in Splice.

There is a difference between not taking a film seriously and being almost required to not become emotionally-invested in the narrative. Unknown blurs the line early and often, to its detriment. Still, the cast is game, and there are moments of notable suspense and objectively exciting action. Unknown is truly a Hitchcock film, but even Hitch made the occasional Marnie or I Confess. And he had to make The Man Who Knew Too Much twice to get it right.