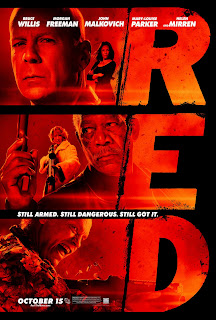 Red
2010
111 minutes
rated PG-13
by Scott Mendelson
There is something to be said for the simple pleasures of watching seasoned performers give weight and potency to relatively shallow material. Red is, on its own merits, a sloppy and thin piece of genre film-making, often lacking basic narrative coherency. It is tonally inconsistent and takes its time to truly establish itself. But it eventually delivers on what it promises: an action-comedy starring a bunch of 'serious' actors who are more than willing to goof off for our amusement.

A token amount of plot: Having retired from the CIA, Frank Moses (Bruce Willis) is struggling with the adjustment to normality. He lives in a lonely, barely furnished apartment, with his only enjoyment coming from his occasional flirtations with equally lonely receptionist Sarah (Marie-Louise Parker) at the office that handles his pension checks. Boredom comes to an abrupt end as black-suited mercenaries invade Frank's home with murder on their agenda. Frank escapes and immediately sets out to Sarah's house, correctly suspecting that she is also being targeted due to her flirtations with the former spy. Frank and Sarah take off on a road trip in order to find out who is trying to killing them and why.

As you can tell from the synopsis above, the film is more of a vehicle for Bruce Willis than a true ensemble picture promised in the trailers. While Morgan Freeman, John Malkovich, Helen Mirren, Ernest Borgnine, Brian Cox, and Richard Dreyfuss do show up at various intervals, they are purely around as supporting characters in the adventure. In fact, second-billed Morgan Freeman gets very little overall screen time, although his sorrowful conversations with Frank (about the irony of a covert spy living long enough to slowly die of liver cancer) are a highlight of the picture. The film has a subtext throughout dealing with the idea of once-great security assets being put out to pasture with little to show for their service and sacrifices, but Freeman's wistfulness is as heavy as it gets. The lonely, idling lives of these retirees are contrasted with agent William Cooper (Karl Urban), who manages to do dirty business for the CIA while still having a family.

The actual plot of Red comes together pretty logically at the end, but getting there requires several leaps of faith. Frankly, the film feels like chunks of exposition or narrative were left on the cutting room floor, especially as certain non-professionals seem to always know who to call to immediately get the right information to advance the story. It is refreshing, in a genre that often treats the press as an enemy, that the murder of a New York Times reporter is both the instigating act of the story and treated as a serious and tragic incident (the victim's mother even gets a scene of mourning). The film treads a thin line between taking its characters seriously (Frank has an act three moment where he implicitly threatens to murder innocent bystanders as a power play) and allowing us to enjoy the occasionally over-the-top action antics.

Acting-wise, this is basically a goof-off for most of the cast. Poor Karl Urban has to play the straight man as the modern-day version of Frank, tasked by the agency with bringing the apparently rogue agent down. It is to the film's credit that you eventually find yourself rooting for both sides, although the film struggles with maintaining Agent Cooper's dignity while allowing our heroes to repeatedly outwit him. John Malkovich goes full-blown ham this time around, playing a paranoid former agent who basically lives in a surveillance-proof bunker. It has been an unending delight to see Malkovich going full-Walken over the last few years, as his once-menacing persona has become instead a vehicle for knowing comedy. Brian Cox is a blast as a former Russian operative who has a history with a few team members, although he too frequently operates as a deus ex machina in the latter half of the film. Dreyfuss has only a couple major scenes, but he makes the most of them (it's certainly a better use of his time than Piranha 3D). Helen Mirren shows up relatively late in the game, but she dominates the movie from that point onward.

There is a refreshing amorality to the picture, as the seemingly righteous Agent Cooper is shown committing a homicide in the opening scenes, and Frank's third-act scheme involves something that's hard to root for even when the big conspiracy has been laid out. And the film never clarifies if all of the would-be enemy agents that are dispatched in the film are mercenaries, or whether some of them were government operatives who thought they were taking out rogue former agents. I wish Marie-Louise Parker had been given more to do than be frazzled and helpless, but she's far from the only female character in the film. And I wish that the film focused less on the relationship between Parker and Willis and more on the various colorful 'RED' spies (that's 'retired, and extremely dangerous'). But the film thankfully does not divulge all of the best action bits and comic payoffs in the trailer, so those who have seen both trailers still have plenty of surprises in store.

At its core, Red is a low-stakes, low-impact action comedy that would be weightless if not for the inherent gravitas of its exceptional cast. Of course, it is wrong to fault a film for working only due to the actors involved, since said actors are the main selling point of the picture. Warts and all, Red eventually delivers what it promises: great (older) actors delivering clever banter, engaging in action set-pieces, and chewing as much scenery as possible in an otherwise unexceptional spy comedy. Frank and the gang may be retired, but this is a team worth reassembling for a sequel.

Grade: B
Posted by Scott Mendelson at 9:42 AM