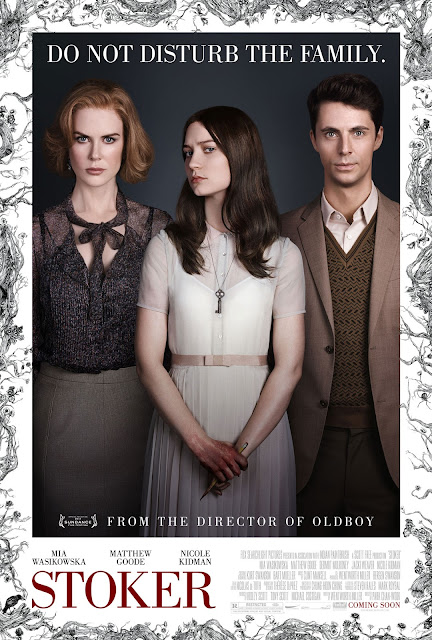 Park Chan-Wook's Stoker is a delicious hybrid of its influences, which mix into an engaging fable of its own.  Written by Wenworth Miller (yeah, the Prison Break guy), the picture doesn't reinvent any wheels but offers strong genre pleasures for those who like 'this kind of thing'.  To say it's well-acted is almost redundant when your film is toplined by Mia Wasikowska, Matthew Goode, and Nicole Kidman.  Stoker is stylish, thoughtful and wears its influences on its sleeve while stilling spinning its own web.  It is part Shadow of a Doubt, part Hamlet while finding new territory to explore in the somewhat well-worn road of 'a young girl's coming of age/sexual awakening'.  It is a slow but ultimately hypnotic tale that is told with a certain tastefulness that makes its moments of misbehavior all the more jolting.

The plot merely concerns a young girl, India (Wasikowska), coping with the sudden death of her father and the equally sudden arrival of her mysterious Uncle Charlie (Goode).  Already socially awkward and introverted, India finds herself initially ill-at-ease around Charlie, even as her bereaved mother (Kidman) finds herself flattered by the attentions of this dashing and handsome newcomer.  More than that I don't need to reveal, only to say that the screenplay goes in both expected and unexpected directions with equal ease.  Stoker takes place only within the confines of its sleepy isolated little town, with much of the film merely taking place in the rustic old family home.  There is an obvious claustrophobia to the proceedings, however obviously symbolic that may be to the proceedings.  The picture, the first such English language film from Chan-wook Park, says much with little dialogue, establishing tone and character with silent interaction.

Wasikowksa again proves to be among the more engaging performers of her generation, no small feat considering her competition these days.  This is a true star vehicle, the kind that you hope will still be there when she's too old to play a proverbial teenager. Nicole Kidman is fantastic per-usual, creating a character who holds our sympathy despite questionable decisions along the way.  Goode has the flashiest role, arguably the easiest as well, but he does exactly what is needed and no more.  The film's moments of violence are indeed jolting, partially due to their relative understatement and the relative absence of explicit gore (there is blood when required, but not overwhelming amounts).  There is at least one third act image, during a key flashback, that is just horrifying in its implications, and the picture is all the more potent for what it merely suggests at key junctures. Even when it finds itself traveling along familiar paths (such as India being harassed by her seemingly blind male schoolmates, with predictable consequences), the destination is intriguing and the revelations are worth the journey.

Stoker just plain works.  It is a genuinely tense and often absorbing slice of carnal life, establishing Wentworth Miller (with the help of Erin Cressida Wilson) as a screenwriter to watch out for over the next few years.  That Chan-wook Park could make a movie like this almost went without saying, but it is still a worthwhile American debut for those who want to keep him on our shores for awhile.  Obviously it plays with themes and ideas popularized by Alfred Hitchcock, but it also plays around with the templates established by Shakespeare as well.  In the end, Stoker is its own thing, a fine and entertaining bit of off-center popcorn fun.  It's a good bit of nasty business, and I mean that as a compliment.

Glad to hear that Park was on his game in this one. He's a once in a generation talent in Korea. I think Oldboy is matchless in its genre--which is one of many reasons why Spike Lee should think twice about remaking it? then again, Hollywood is into making pointless remakes of lots of great foreign films these days (i.e. Lat Den Ratte Komma In, Dragon Tattoo), so why not??