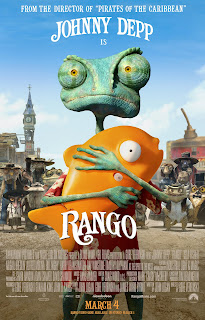 Rango is the very definition of an odd-duck. It is a gorgeously-animated little fable that works both as an homage to westerns (spaghetti or otherwise) and film noir, as well as a thoughtful and spiritual hero's journey. It may not be a prototypical talking animal cartoon, and it keeps its emotionalism in check for most of the running time, but the picture remains an aloof and endlessly imaginative piece of art cleverly disguised as throwaway pop-entertainment. As a piece of political fiction, it shows us yet again how warped our discourse has become. In this day and age, its seemingly common-sense story of the rich exploiting the poor very nearly counts as a partisan statement. Oh, and it's also pretty funny to boot.

The plot is yet another riff on the whole 'useless nobody gets mistaken for a hero and must rise to the occasion to save a downtrodden people'. In this case, the useless nobody is a play-acting chameleon house pet (Johnny Depp) who is flung from a car and left adrift on the side of the road. Fighting for mere survival, the helpless lizard eventually makes his way to the town of Dirt, which is on the verge of extinction due to a severe drought. Making the best of a bad situation, our unnamed house pet takes the name 'Rango' and bluffs his way into becoming the town sheriff. But now that he's the law of this dying town, can he discover just where all the water went in order to save the townspeople who have pinned their hopes on him alone?

Rango is arguably one of the most visually dynamic animated films ever created. The richly detailed visuals on display need no 3D enhancement to be truly eye-popping. This is the first animated film spearheaded by ILM, and it's a little shocking they haven't played in this sandbox before. With rich desert locales supervised by Roger Deakins and astonishingly detailed character designs, director Gore Verbinski also earns kudos for keeping the picture more or less within the realm of plausible physics, which gives the action scenes a genuine weight and authenticity. In this day and age, pretty much every major animated feature looks gorgeous, but this one stands alongside Legend of the Guardians as a full-on bit of visual nirvana.

The vocal cast is pretty much note-perfect throughout. Johnny Depp gives a genuine performance which stands as one of his better characters since Pirates of the Caribbean: Curse of the Black Pearl made his shtick mainstream back in 2003. While his terrified screaming sounds a bit much like Kermit the Frog, he does build a token amount of sympathy for the hapless would-be hero even when his actions merit scorn. The rest of the cast is basically doing character turns. Ned Beatty plays Mayor 'Not Noah Cross', and it's frankly always good to see (or hear) Ned Beatty onscreen. Ray Winstone and Bill Nighy provide suitable villainy and the rest of the cast (Isla Fisher, Alfred Molina, Abigail Breslin, Stephen Root, Harry Dean Stanton, etc) do their best to deliver the vocal goods without making the viewer play a constant game of 'who's that voice?'.

While Rango is basically an animated film about talking animals, it is arguably not for kids under six or seven. It is indeed refreshing to see a cartoon that actually earns its PG, but parents should know that the movie pulls no punches when it comes to intense action, genuine menace, and periodic violence (the film does have a body count). It will be interesting to see what, if any, reaction the film's overriding narrative receives from the general public. While a story involving the corrupt wealthy exploiting or victimizing working people for material gain would generally be considered an old-fashioned myth of right-vs-wrong, in today's Tea Party vs. Unions class warfare, the film may very well be seen as a piece of political dogma. But then, this is a Gore Verbinski picture. Verbinski turned the Pirates of the Caribbean sequels into a powerful criticism of the post-9/11 War on Terror and no one even noticed. On its face, Rango has no real political agenda. But its seemingly old-fashioned morality play may indeed be considered partisan in today's environment.

But political interpretations aside, Rango is an unqualified genuine artistic triumph. It succeeds as a loving homage to American cinema, as well as a potent piece of craft on its own. It is a visual delight and a rousing action picture that works whether you get the film references or not. It is not an overly emotional fable, so it will not tickle the heart in the manner of Toy Story 3 or How To Train Your Dragon. But it is a genuinely intelligent and nearly soulful bit of myth-making. It is easily the best film of 2011 thus far, and it's tough not declaring this year's Animated Film Oscar race pretty much finished.