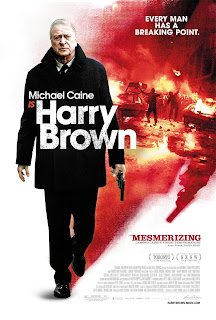 Harry Brown is, on the surface, a vigilante picture in the mold of Outlaws, Death Wish or The Brave One. It concerns an ordinary man fed up with rampant crime and unable or unwilling to trust the local authorities to stem the tide. But the film is really about social disconnect, and the trauma that can occur when no one feels connected to their peers. When no one feels any connection to those around them, it is only that much easier to victimize or ignore the plight of our neighbors. There is also a token nod to the futility of the 'war on drugs', and how much collateral damage it has created. But, for those who don't care about the 'deeper meanings', it also works as a violent action drama about Michael Caine taking the law into his own hands. Whichever suits your pleasure.

A token amount of plot: Like a lot of vigilante pictures, the opening act is so filled with wanton street crime and gruesome arbitrary bloodshed that one wonders how our hero even lived long enough to become victimized in the first place. Michael Caine plays Harry Brown, a retired Royal Marine who lives in a housing project for low-income citizens. A double-whammy of tragedy rocks his world, as his long suffering wife passes away on the same week (day?) that his best friend is murdered by young hooligans. When the sympathetic police detective (Emily Mortimer) informs Brown that conviction will be difficult, Brown takes it upon himself to wreak murderous vengeance.

What makes the picture more effective than a random Death Wish sequel is the quiet and simmering performance of Michael Caine. Caine has found a new potency now that he's playing characters that are having to face their own mortality. His work here, while different in tone and substance, is just as powerful as his star turn last year in I'm Not Here, where he played a bereaved former magician dying of Alzheimer's. Brown is horribly traumatized by what he did while in Marines, and the events in the first act of the picture causes him to at last unlock that brutality that he consciously buried after the war. Harry Brown's vigilante is a portrait of someone who truly has nothing left to lose, and there is an unstated idea that he does not intend to survive his pursuit of the gang that murdered his friend.

Everyone in the film is cut off from one-another. The police are distrusted by the community at large, the peaceful citizens live in fear from the hooligans, and the hooligans themselves feel no ties to their own neighborhoods, making it that much easier to attack and kill without empathy. The film's violence is swift, brutal, and bloody, with the slaughter of the guilty every bit as gruesome as the slaughter of innocents. This is not a film that promotes vigilantism, but neither does it explicitly 'tisk-tisk' the idea of fed-up locals fighting back on their own. Harry Brown is not a crowd-pleasing wish-fulfillment fantasy, but a sad and sobering drama where vigilantism is seen as the inevitable result of the failure of society to police itself.