Review: Flight (2012) is generic and conventional would-be character study that never takes off. 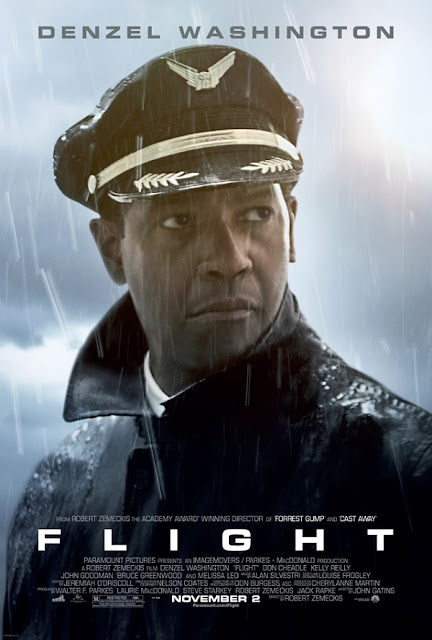 That Robert Zemeckis's Flight does not resemble the film that is being advertised (trailer) it not in itself a crime.  Marketing is often a game of misdirection and, considering Zemeckis's reputation for spoiler-filled trailers, it's a little ironic that his return to live-action film making is advertised is such a bait-and-switch fashion.  But while I'll honestly admit that I would have preferred the film being advertised versus the film that was delivered, the core flaw of this well-acted Denzel Washington vehicle is that it's not a very compelling version of what it is.  In short it's *not* a character-driven mystery involving a plane crash and how exactly it went down and who or what was responsible.  It is simply a character study of a functioning alcoholic.  What grounds Flight is the fact that it's simple not a very good film about a functioning alcoholic, as several major narrative choices work to lessen our interest and emotional investment.

The plot is pretty simple.  Whip Whitaker (Denzel Washington, fine as always but not really challenging himself) is heralded as a hero after he miraculously lands a malfunctioning plane in an open field with almost no casualties.  But the new-found spotlight is both unwanted and detrimental, as it also shines a light on his various vices, specifically drugs and alcohol.  The big dilemma of the film is that Whip was very drunk when he flew that morning, something that if it comes to light may land him in prison.  But of course the core conflict is basically whether or not Whip will come to terms with his alcoholism and admit that he has a problem.  That's pretty much it.  The film doesn't break any new ground in the 'struggles of an alcoholic'  genre and all-too often reverts to cliche.  The film springs to life only when Washington is interacting with Don Cheadle (his union attorney) and Bruce Greenwood (as a longtime friend who is in a professional position to help him).  To put it bluntly, the intricacies behind the plane crash and its aftermath is far more compelling than what amounts to a relatively routine detox/wagon-fall at the center of the film.

The film doesn't ask us to pity its protagonist but it also doesn't create a situation where it really matters whether or not he sobers up.  In short, by the time we meet him, his family is long gone, he has no real friends, and he is basically alone.  In short, aside from 'not being an alcoholic  as a matter of practicality, there is little incentive for him to recover and thus little incentive for us to care about his journey.  As mentioned above, the picture is well acted by all, including fine extended cameos from the likes of Tamara Tunie and John Goodman.  Although in the later case, the film presents Whip's alcoholism and drug use as a net-negative while presenting his drug dealer as a crowd-pleasing comic relief character.  Kelly Reilly has a mostly thankless role as a fellow addict who is making a more serious effort to sober up, as she is basically there to give the otherwise alone Whip someone to talk to and rage against at respective intervals.  The writing is surprisingly weak, with rather boiler-plate monologues, a contrived finale, and oddly sloppy dialogue.  For example, I'm pretty sure Cheadle got an extra $50 every time he uttered "killed the tox report".

If I may point out something, I was surprised and pleased by the sheer number of minority actors that appear onscreen in parts both large and small, as this is absolutely not a "Denzel Washington surrounded by white people" kind of film.  Technically speaking, Zemeckis again proves that he is a master craftsman, even if the $30 million budget is apparent throughout.  The plane crash sequence is suitably intense and realistic, and its almost low-key presentation makes it all the scarier.  But once the plane goes down and the film shifts gears, Flight quickly reveals that its 'air emergency' first act is almost beside the point, feeling like a high concept idea grafted on to a mundane 'demon in a bottle' story in order to get big studio funding.  That Flight is not the movie I was expecting to see, or that I wanted to see, is not grounds for criticism.  But the fact that Flight simply isn't a very compelling version of what it is demands acknowledgement.

I suppose I am supposed to cheer Zemeckis's return to live-action filmmaking, even though I rather liked all three of his motion-capture animated features (Polar Express has breathtaking 3D and Beowulf is a superb action-horror hybrid).  But in short this is simply one of the least interesting pictures of his justly celebrated career.  As worthwhile as it may be in this day-and-age to tell a character study using a major studio canvas, Flight just isn't very good.

Grade: C
Posted by Scott Mendelson at 8:35 AM

I couldn't agree more. Spot on.

Oh no! I was really looking forward to this one. I thought the trailer looked fantastic.

Alright, I've been reading this blog for awhile now and there's seems to be no internal logic or consistency in the grading of these films. He gave this movie a C, completely disregarding Denzel's stellar performance, yet he gave Transformers: Dark of the Moon a B and Sucker Punch... I repeat... SUCKER PUNCH an A-. I'm done.